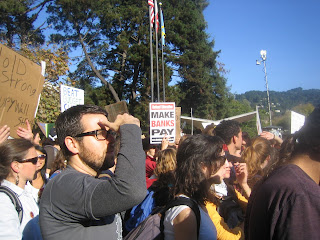 Gorgeous day in Berkeley today. Temperature in the high 60s. The mood is copasetic.

I walked up to campus because I got an e-mail from one of the city council members urging people in the community to show their support for the students rallying today, and hell, when government calls, I answer the call.

As I approached the campus I expected to hear some crowd noises, but all I saw was people going about their business. There was in fact a crowd in front of Sproul Hall, but the mood was festive, not angry. How can one be angry on a day like this, with the sun shining down. New England has been without electricity for a week, but we’re still running around in T-shirts. 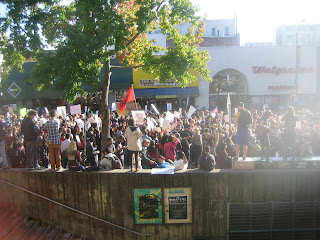 I took a few pictures of the signs and the crowds and settled in for a coffee and a scone. When I want to guilt myself, I describe myself as somebody who, when the revolution comes, will be complaining either that there’s no public transportation to take me there, or that it’s late, or that there’s no bus stop right in front of a coffee shop.

Two students were at the table next to me. They were using words like hegemonic and commodify, but they were discussing philosophy, not politics. When the crowd paraded by, they stopped what they were doing. One of them commented, “Do they have an agenda? Or are they just angry?” The other one answered, “Who knows what they want. I think they don’t even know what they want.” 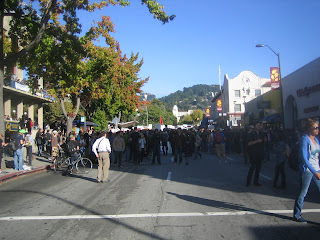 It was hard to keep my mouth shut. Here were two students who evidently had so much money they didn’t seem to realize, or care, that most of the signs had to do with a 60% tuition raise. They were dead wrong. The students knew exactly what they wanted. They wanted to pay a whole lot less for their education. And how dare you use words like hegemonic and be so friggin clueless?

They left before I could poison their coffee, and a woman sat down with earphones in her ears. Good, I thought. I can get back to my reading. But she didn’t seem to notice I was reading. “What’s the protest all about?” she asked. “Did something happen?”

God, another one, I thought. How are we ever going to fix the world with everybody so damned detached. I explained that this was both a protest over tuition hikes and a march of solidarity with the Occupy movements now spreading around the world. Turns out she was a professor. And her question said more about her fear that there might have been more violence than that she was as clueless as the philosophers.

I walked home and apologized to the dogs for not taking them with me. Don’t want them anywhere near an unruly crowd, but today they would have been completely safe. 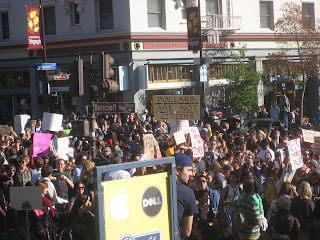 So often I get angry that people aren’t angry. When Harvey Milk was killed and we marched down Market Street with candles, I remember a guy standing and watching the mass of folk march by, shouting, “Where is your rage? Where is your rage?”

And today was not a time for rage, either. As city administrations move to clear out the Occupy Movements because they have in large part been hijacked by violent outsiders, and as people in the Occupy protests themselves work out the next steps, this little corner of the world did its thing in a very slow and peaceful way. A little protesting. A little sign carrying. A whole bunch of smiling faces. A couple conversations in the coffee shop. And then home to feed the dogs and think about dinner. 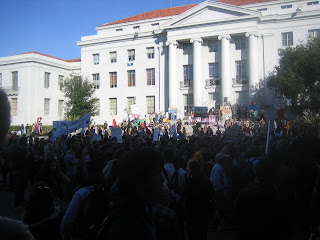