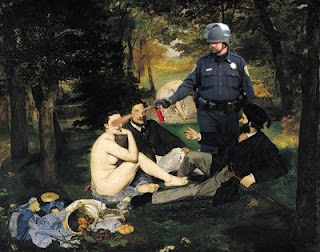 The UC Davis story has staying power. In fact, it may still be growing. The headlines in this morning's San Francisco Chronicle read "UC Davis chancellor tearfully apologizes" and has a picture of Chancellor Linda Katehi, looking like she hasn't slept in 48 hours, being escorted by two burly guys to her car. And the online edition, SFGate, has a picture of the pepper spraying incident attached to the story of the “tearful” apology four days later.

Poor woman. You have to wonder if this isn't being overdone. But the rage has to go somewhere. Earlier there was a picture of her walking to her car at night past students lined up, watching in stone-cold silence as she passed. The paper called it a "perp walk." There are pictures everywhere of signs, "Resign, resign!" Interesting that both the chancellor and the police chief are women. How times have changed.

Charlie Rose had two especially interesting interviews on last night, one with Dov Seidman, and the other with David Brooks. If you go in the next couple of days, this link will work. After that, you can still find the interviews, one more fascinating than the other. Seidman's going around giving big corporations lectures on being ethical. Brooks is talking about how government is broken but the country is very healthy because, he says, "Americans still trust strangers and can build organizations” while most of the world is still wary of outsiders." Interesting social analysis, even though most analysis on that level often misses the devils in the details.

One of them mentioned the power of single individuals to either change the world or represent change of some kind, thanks to the internet and the fact that things regularly go viral now. And nothing illustrates that better than this Davis story. Davis is a kind of out of the way school, very much a country cousin to UC Berkeley and UCLA. Known for its School of Veterinary Medicine and its Department of Viticulture and Enology (and how many of those do you see around?) A place that suggests earthiness, and calm and steady hard work. Now you hear people criticizing the administration for forgetting its educational purpose and being all about management and control. They're taking a beating.

I just got off the phone. It rang before 9 o’clock this morning and it was somebody from the DCCC – the Democratic Congressional Campaign Committee, the folks working to get Democrats into office nationwide. I usually hang up quickly, sometimes complaining about telephone solicitations, usually asking them to take my name off donor lists. The last time somebody from the DCCC called I went on at length about how I’ve decided not to send another nickel to political campaigns as long as the system stays broken. This morning the young lady was way ahead of me. “And just who’s going to fix it?” (she stopped before she actually said, “Mr. Smarty Pants.”) We talked a full fifteen or twenty minutes. Not smart on her part if she’s serious about fund raising. But in the end, she got fifty bucks out of me, not because I’ve changed my mind about the broken system, but because I couldn’t not reward a bright eyed young woman who talked about daily arguments with her grandparents who feel as I do about the failure of the system in the United States. I immediately regretted it, when the next item in my inbox was a solicitation for funds from AlterNet. “Please support AlterNet’s coverage of OWS,” it says. Precisely the kind of thing I told the woman I wanted to send my pocket change to, instead of things that keep the system going.

In the end, my small contributions won’t make any difference, except that they do hold off despair and cynicism for another day. The letters to the editor are filled with complaints about how smelly and stupid and destructive the occupy movements are. And they all miss the point, which is that things are stirring and there’s no telling where they will go. The cops with their batons and their pepper spray are already iconic images of the system gone wrong.

Now I’m wondering if the rage can lose Ms. Katehi her job, or if it should. I know the buck has to stop somewhere, and too often it stops before it gets to the top. But on the surface of things, it would seem counterproductive to push Linda Katehi aside.

I just checked her background. Turns out her full name is Pisti Basile "Linda" Katehi-Tseregounis, and she’s fourteen years younger than me. She was born in Athens and was raised on Salamis Island, which, I am told, was mentioned by Homer. She’s an electrical engineer and computer scientist, holds nineteen U.S. patents and has authored some 650 publications. Doesn’t sound like one of the bad guys. But she may take the blame. Particularly when it gets out that her salary is $400,000, paid directly by California taxpayers. The same ones that send their kids off to college to study winemaking and to research leukemia in cats.

The images of two UC campus police forces, one at Berkeley, with police punching kids in the gut with their batons, and one at Davis, with the vivid color of red pepper being sprayed directly into kids’ eyes, were matches to a pile of dry kindling.

There’s so much to this story of unrest in America.