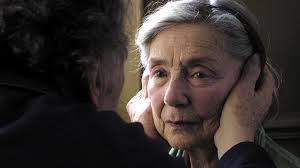 Amour has a number of walk-on characters: the concierge and his wife, who provide Georges and Anne with the groceries they need to live in isolation as Anne slowly dies before our eyes under Georges’ care.  And Alexandre, a concert pianist and former student of Anne’s, whose memory of Anne from better days provides her with the dignity now being stripped from her almost by the hour. 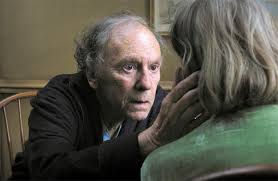 Amour also has one minor character: Eva, Georges and Anne’s daughter, who struggles with her father to make sense of death – and fails.  Mostly Amour is about three major characters: Anne and Georges, a couple who have grown old together and are now in their 80s.  And the apartment that contains them.

Anne suffers a debilitating stroke and fails rapidly before our eyes.  Georges assumes the role of caretaker and witness to her undignified demise.  The apartment is a shabby reminder of better times when the paint was fresh and the rooms were filled with art and music – the books are still there – and most likely more than a touch of Parisian elegance.  A place now reduced to four walls and furniture limited to two chairs and a settee in the living room, two chairs in the kitchen, and eventually a hospital bed in the bedroom.   A fortress to withdraw to when one no longer wants to answer the telephone.

If you have not yet seen the film, this review may not be for you.  It contains spoilers.

Anne and Georges return from a concert to find the lock broken on their  apartment door.  Anne remarks that if an invader were to enter, it would frighten her to death.  We soon learn that it’s not a burglar she has to fear; it’s death itself that has entered their space.

Austrian filmmaker Michael Haneke makes horror films.  Amour is his latest, and the film’s title masks the fact the horror this time is not ritual suicide, as in The Seventh Continent (1989), terrorist home invasion, as in Funny Games (1997), or religious sadism and child abuse, as in The White Ribbon (2009), but the fact that life itself comes to an end, and the ending can be anything but pretty.

Amour is not just another movie about the end of life.  It’s about the end of life as a taboo topic.   About death as loss of dignity and the gradual removal of those things which give life meaning – food and drink, communicating with loved ones, music, art, pride in one’s appearance, mobility and the illusion of control over one’s fate.

Emmanuelle Riva’s performance is nothing short of perfection.  How she missed the Best Actress Oscar this year will always be a mystery.  Jean-Louis Trintignant’s performance, by the same token, shows that Haneke knew what he was doing when he wrote the story for Trintignant.   At some point about halfway through the movie I wondered if I was going to be able make it to the end, but I immediately realized I was so engaged by the acting skills of these two masters that there was no way I was going to miss seeing where they would take it.  And there was a second reason, which I’ll get to in a minute.

Amour is a character study of a man who slowly comes to the realization that he is not up to the task he is faced with.  The old line that God gives you no task he doesn’t also give you the tools to deal with may not be true.  You’re never quite sure.  Why didn’t Georges and Anne have a better relationship with their daughter, so she could have stepped in and helped bear the burden?  Why don’t we all have perfect relationships with all the people in our lives?  Why are we all not prepared for the unforseeable?

The unrelenting suffering and loss of dignity is relieved by one powerful scene where Georges reveals not only an inner strength but what Anne said to him once at the breakfast table: “You are a monster.  But you have been very kind to me.”  We have just witnessed an act of humiliation.  The nurse who has combed Anne’s hair puts a mirror in front of her face and asks her to acknowledge that she has made her beautiful.   The next thing we see is Georges firing the nurse for incompetence.  The scene gets ugly, but Georges has restored dignity and your respect for him soars.

It’s a movie about death and dying.  It’s also about euthanasia.  Haneke clearly wants his audience to ask themselves how much of this pain and suffering they are willing to take.  I can well imagine a young person hearing about the plot line and deciding to give the film a miss.  This is not a film to enjoy; it’s an experience to endure.  I am the same age as the filmmaker, and about ten years younger than the main characters.  I am less likely than a young person to pretend we can brush the topic of death and dying aside.  I want to be prepared to take my own life, and in a way that nobody else will be blamed.  I’m not yet ready to plan my death and I am tortured by the question, when will I be?   Is leaving it to fate the only real option?  I don’t have the courage or the cowardice – I’m not sure which it is – to look away from the question Haneke is asking: Do you have what it takes?

If you’re lucky, you will die a natural death.  Or you will be cared for in hospice, surrounded by loved ones.  But what if you mess up, and you don’t get dot all your Is and cross all your Ts?  What if you aren’t so lucky?  What if you are left to die on your own, with only one loved one to see you through?  Or no loved ones?

It took me two days to realize the movie was not just about Anne.  It's equally, possibly more, about Georges.  I realized only after some time the significance of the detail that Haneke wrote the story for Trintignant.  You become so focused on the horror of Anne’s rapid decline – a year telescoped into two hours – and the fact you are watching a taboo, that you miss entirely – at least I did – that Haneke stops before an even bigger taboo.  What becomes of you when you have given your all?  When you have taken the responsibility of making a life and death choice for another human being?

A good deal of the story deals with Anne’s loss of dignity.  The scene with the insensitive nurse.  Another, where Georges locks the door to her bedroom when Eva shows up unannounced because he knows Anne doesn’t want to be seen in her present state, even by, and possibly especially by, her daughter.  We see her being spoon-fed and the food dribbling down her chin, we see her spitting out water, we see her sitting naked in the shower being bathed by a stranger.  And we see her, in Georges’ memory flashback, as he wants to remember her, sitting at the keyboard, the graceful lady she once was.

Haneke doesn’t tell a story so much as lay out events in ways that force you to ask questions.  A pigeon flies into the apartment, not once, but twice.  What is it doing in this film?   Is the pigeon a dove?  The Holy Spirit?  The symbolism doesn’t work.   Accidental intrusion of nature into one’s inner sanctum?   Or perhaps the simple absurdity of life in the end.  A metaphor for life as an act of no ultimate consequence, a momentary distraction.

I am aware, in rereading what I have just written here, that I’ve portrayed the watching of this film as self-inflicted torture.  It is an endurance test, but it’s one worth enduring. Others have tried to claim this is a movie about devotion, about two old people who have known love and who ride the end out together.  Or that we should focus not on Anne’s death and dying but on the fact that she went to her death not alone, but in the embrace of a man totally devoted to her – that this was the ultimate love story.  You may see it that way.  I didn’t, but you may.

What I saw instead was the other reason I mentioned for appreciating the film and not wanting to leave the theater.  It is rare – so rare that it almost doesn’t happen at all – that a filmmaker puts all the decision making about what is transpiring on the screen in the viewers’ own hands.  Why does Georges disappear from the story in the end?  Why is this loose end not tied up?  Eva enters the apartment, as in a coda to a piece of music, and we see it now empty of all life, all furniture, all trace of illness and death, and there is no sign of Georges’ last days.   We have seen the obscenity of death in Anne’s slow demise.  We are spared having to look at what happens next.  The last taboo. What happens to Georges?  This is audience participation.  Haneke wants you to write that part of the story.

I’d call Amour a five-star movie.  Not because it grabs you and makes you cry.  I didn’t shed a single tear.  And not because you come out of the theater impressed by superb acting and directing – which you certainly do.  That would make it a four-star.  The fifth star is for new heights in story-telling honesty.  It will be matched in the future, probably.   But I doubt it will be excelled.