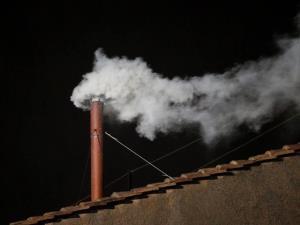 Well, the Italians have got their Italian pope.  He’s from Argentina, so that gives them a twofer.  We are ecumenical, you see.   A Polish pope, a German pope and now an Argentine pope, all in rapid succession.  A pope from the New World, for the very first time.


That’s what the chatter will focus on, no doubt, as people reach out and try to find things about which to sing the praises of the wisdom of the choice.   It should not be lost that this is very much business as usual.   They’ve got themselves a conservative hardliner who will stick to the old boys’ set of authoritarian claims that they are the gatekeepers of heaven.  Top of the list of rules that they will attempt to impose on the world is the one that men and only men must rule.   That women need to subject themselves to their fathers and their husbands.  That they need to recognize God does not want them to speak on matters religious.  The male God does not put into the hands of women the power to forgive sins.

Gay men and women are expected to go on denying what they know in their hearts, that they are capable of great love and devotion.  They will be expected to continue the fiction that they have a choice between a life of sin, or a life of sexual denial.  Make babies with it, or put it away.

Less clear is what will happen, if anything, within the church to clean away the arrogance that allowed corrupt priests and bishops to be set above the children abused by priests and bishops, when the church first denied it was happening, then blamed it on a few bad apples, then on homosexuality as a sexuality, then complained that others, like the Boy Scouts, were just as bad, and finally shut down churches to pay the billions the courts hit them up for in reparations.   And that's just in the United States.  And the numbers continue to rise.

They tried to maintain this was but a momentary aberration of an otherwise infallible institution, incapable of error.   After all, what is a waif or an orphan here and there compared to the good name of the Church established by Saint Peter and under the guidance of the Holy Spirit?

Less clear, also, is what will happen to those voices within the church urging it to represent the poor and the powerless, the uprooted and the vulnerable.   One has to assume the jewels, the limousines, the banquets with kings and other top drawer people of the planet will continue as before.  The patriarchy will call the shots.   Priests working under some silly notion of “liberation” will need to stand back.  One assumes, too, there will be no adequate response to the fact the church in the developed world continues to hemorrhage parishoners, that many parishes go without priests, that suggestions these positions be filled by women will be rejected.  We will probably see more emphasis on the successes in the Third World without analysis of what these figures actually represent.

I just watched the Vatican press conference live, and saw three articulate spokespersons present the event as a glorious moment.  Federico Lombardi of Vatican Radio, who speaks such exquisite Italian, Canadian Father Thomas Rosica, who is the image of hardworking bilingual Canada with his easy flowing English and his English-accented but otherwise perfect French, and Spaniard Juan Maria de Tamayo, who spoke only Spanish and you wondered whether we're done with German now, all gave a great showing, even when a Chilean journalist asked them why it is Cardinal Mahoney was allowed to be there, considering his standing as a disgraced church leader, removed from his position because of failure to care for abuse victims properly.  They provided a diplomatic answer, making no mention of the fact that Mahoney’s diocese had just settled claims against it to the tune of some ten million dollars    Clearly the name of the game was keeping this a great moment of optimism and jubilation.

I love it that a band marched up to the steps of St. Peter’s and played the Italian national anthem.  You didn’t miss the fact that this guy’s name is Bergoglio, now did you?  Not Smith, not Wittgenstein or Hickenlooper (been there, done that - no need for German at any press conferences anymore), not Nkumra.  We’ve got the reins back again.  I understand the early contenders included Marc Ouellet of Canada, and Odilo Pedro Scherer of Brazil, as well as Bergoglio of Argentina.  Clearly there were forces pushing for a guy from the Western Hemisphere.  The other early contender was the Italian, Angelo Scola.  You’ve got to hand it to the Vatican.  Despite the line they put out about what a spiritual process this conclave is and all the talk about Mexican nuns praying around the clock that the Holy Spirit will do the right thing (why would He ever do otherwise?) you’ve got some very savvy old men doing the diplomatic work of political compromise.

In fact, it’s quite remarkable how they know to be consistent when it doesn’t cost them face.  Francis, né Jorge Bergoglio, was the second choice in the last election, when Benedict won out.  So this is a nice little statement about consistency, one of the church’s favorite concepts.  After such a bookish distant pope, they’ve got themselves a man who lives not with a George Clooney type in a palace with gardens to die for but with an older priest, walks around in a simple priest’s robe, and cooks his own meals.  Nice.  Got the common touch.  Rides a bus to work.  Chose a name for himself never used before in papal history.  Francis.  The guy who talked to birds.  Everybody’s favorite saint.  The antithesis of backslappers like Timothy Dolan of New York and self-serving insider thought police like Lavandera and Cordileone of San Francisco, to name a few Catholics who reveal the split between the Democrats in the pews and the Republicans who run the show.

Franziskus, as the Germans will call him (I’d suggest the less latinate Franz, but I admit that sounds too much like somebody who works in a brewery), speaks German.   Francesco, in Italian.   He speaks that too, of course.  François, as the French will call him, will be the first Jesuit to sit on the siège de Saint-Pierre.   That’s a biggie.  Jesuits, despite their vow to be loyal to the pope “as a cadaver”  –  no kidding – look it up:  “perinde ac ("as if")  cadaver,” as their founder put it   –   are notoriously independent and disobedient.

“La presidenta Cristina Fernández de Kirchner envió una carta al flamante Sumo Pontífice de la Iglesia Católica” reads the headline in the Buenos Aires paper Pagina 12.   And no, that does not mean President Kirchner sent a postcard to the flaming sumo wrestler of the catholic church, although that's what she may think of him after all those political battles they had over same-sex marriage.   Sumo is supreme, carta is letter, and flamante is brand-new.  I have it direct from Buenos Aires that people there are pretty psyched, although the Guardian reports there are no tangos in the street for some reason.   Possibly the 20% who actually go to church are at a same-sex wedding somewhere.   Francisco (don’t call me Pancho) will not be using “the First” by the way.  We have come to think for the past couple thousand years that a pope needs a number after his name, but the official word is in.  You’re not officially the first at something until there is a second.

So here we are with a new beginning.  Time to put aside all the information about the failure of the church in the past.  Time to put aside, for now, the role of the Catholic Church in supporting the dictators of Latin America, especially during the ugly years when the generals were dropping young idealists into the sea from helicopters and priests like Christian von Wernich working for the generals were shunted off to Chile afterwards by the archbishop of Buenos Aires to protect him from prosecution.  That wasn’t Bergoglio, by the way.  That was Aramburu, who denied there was anything funny going on.

I would like to know, though, what Bergoglio thought of what was going on at the time.  I still want to hear more from priests like Eduardo de la Serna, who is on record as being none too pleased with his archbishop.  “The least we can say,” said de la Serna last November, speaking about a moral crisis in the country and about a Christmas message put out by the church, “is that we who are in the slums, among the people, with our feet in the mud, we have a view that is very different from the one in the bishops’ document.”

In response to the news about his archbishop’s election to pope, Father Eduardo expressed some concern.   "I still have many doubts about his role regarding the Jesuits who went missing under the dictatorship."

But that’s all for another day.  Let’s give Pancho twenty-four hours to get his feet wet.