The Week of the Supremes 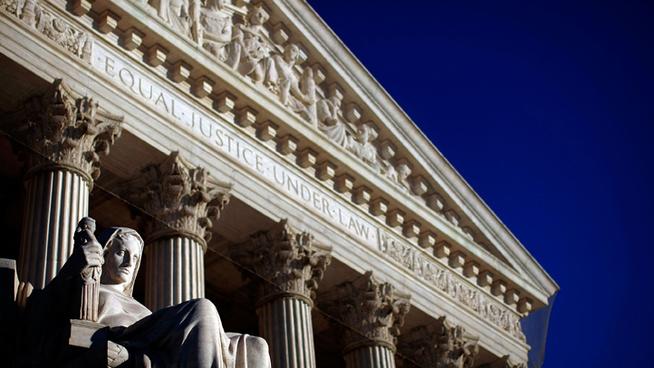 The Supreme Court is taking up, at long last, two big court cases this week affecting the rights of LGBT people.   On Tuesday they will hear the challenge to Prop. 8, which took away the right of LGBT people to marry in California.  And on Wednesday, they will hear a challenge to DOMA, the nastily mis-named “Defense of Marriage Act” which imposed a no-gays-allowed policy nation wide that has prevented gays and lesbians from all sorts of benefits, from tax benefits to adoption rights to hospital visits – more than 1000 in all – that straight people enjoy and gay people don’t.  Most people are predicting that DOMA will be overturned.  There is less certainty about the Prop. 8 case.


If you have access to today’s New York Times, they did a splendid job of laying out the complexity of the two cases, on page 16, complete with flow chart and graphics depicting what people are calling the 1-state solution, the 9-state solution, and the 50-state solution to the Prop. 8 battle.   (They don’t use these terms, and the graph was made before it became clear that Colorado would join the eight states with domestic partnerships, but the terms are the right ones.)

The 1-state solution, if the Supreme Court decides to resolve the conflict this way, would overturn Prop. 8 in California and return to gays the right to marry, but it would leave everybody else out.  It would uphold the decision that the U.S. District Court (Judge Walker) in California reached to overturn Prop. 8.  It would be what is called “the narrow ruling,” the ruling which decides on the basis of those couples taking the case to court, not on the basis of all gay people’s rights generally.  The way they would get there would be via a curious legalism.  When Judge Walker decided Prop. 8 was unconstitutional, he decided in favor of the couples (one of whom was named Perry) who wanted to marry, and against the government of the State of California (then headed by Schwarzenegger), which was obliged to uphold the bad law.  But then the government folk who were supposed to defend this homophobic law some more drew the line when it went to the 9th Circuit Court of Appeals.  They said no.  They (including Schwarzenegger) agreed with Walker that Perry should win and Schwarzenegger should lose, and they wouldn’t support it.

So then the same anti-gay religious folk who put Prop. 8 on the ballot in the first place (and paid all that Knights of Columbus and Mormon money for false information to mislead California voters into voting for it) decided they would have to take up the appeal, if Schwarzenegger wouldn’t.  Now in real life they should have been shown the door, since the rules say only people directly affected by the law have the right to sponsor efforts to do this.  But somebody bent over backwards, and let them do it.   What the Supreme Court can do now, if they want to make this a narrow ruling, is simply declare these religious pork butts had no standing.  They should not have been allowed to take it to the Appeals Court in the first place.  And that would mean the Appeals Court never happened (even though the Appeals Court upheld the Walker decision – told you it was complicated) and the Walker decision would stand.

Nine U.S. states have domestic partnership or civil union rights (eight at the moment, and Colorado starting May 1st) which are essentially the same as marriage rights.  This means that the battle over same-sex marriage in these states comes down to a battle over the right to the word “marriage.”  The Supreme Court could decide to accept the argument that it makes no sense to grant rights to do something but insist on making a semantic distinction that hurts gays and at the same time doesn’t help straights.  The 9-state solution would simply extend to the people in the nine states with domestic partnership or civil union rights, the right to call themselves married.  That would mean gays and lesbians could marry in nine more states, in addition to the nine states (plus D.C.) where they can already marry, making it eighteen states plus D.C., where same-sex marriage is legal in the U.S.

The 50-state solution, if chosen, would be derived from the argument that anti-gay bias is not a proper basis for law-making, and all restrictions gay people now live under would therefore be removed.

Obviously I believe the right thing for the Supremes to do is give us the 50-state solution.

Most people I know who have been following this struggle closely are guessing it’s a toss-up between the 1-state and the 9-state solutions.  Nobody I know thinks we will come out of this hearing with no changes.

I keep thinking about the comment I heard Ruth Bader Ginsburg make the other day, that Roe v. Wade may have been a mistake.  It made abortion safe and legal – no small thing – but it hardened the right wing and gave them cause to distrust the legal system and start down the path of crying “activist judges!” every time they were faced with a decision they didn’t like.  The implication is this could happen again if the Supremes go for the 50-state solution, because clearly many in the country are not “ready for it.”

This is in line with the thinking of other justices who believe the Supreme Court has to be “prudent” and “move slowly.”  Not get too far ahead of the thinking of the country.  It has to do its job assessing constitutionality, of course, but we’re supposed to believe they have to consider which cases to take and when to take them on the basis of the pulse and the mood of the country.  That bothers me.

There are two forces urging caution.  One consists of people you hear on the Fox Network arguing as if the only rule that applied to American democracy was majority rule.  These people act as if the Supreme Court had no function to override laws passed at the expense of basic constitutional rights.  They have been talking this way since Prop. 8 when it appeared the majority of Americans were against same-sex marriage.  No court, they wanted you to know, Supreme or otherwise, has any right to go against the supposed “will of the people.”  You’ll note they are singing a different tune now that the tide has changed and the majority of Americans are in favor of same-sex marriage.  I heard Tony Perkins argue this morning that the polls were wrong.   Poor fellow.  Where else can he go now?

The other force are the wise and practical people, like the ACLU, which made a very strong case that Boies and Olsen should never have taken up the cause of same-sex marriage because the country “wasn’t ready” and they might lose and set gay rights back an entire generation.  The ACLU didn’t anticipate how rapidly things would change, and how in a few short years support for same-sex marriage among young people would be in the 80% range.

It’s an interesting philosophical question, whether to let the majority rule on everything.  Thank God we don’t.  Democracy without constitutional constraints is mob rule.

Consider what American majorities have wanted in the past, and have gotten away with, actually – slavery, white supremacy, keeping Jews out of country clubs, putting children to work in factories, keeping women from voting, forcing Chinese laborers to leave their women behind in China to make a living, putting Japanese in concentration camps, taking the country to war in Vietnam and Iraq, keeping gays from marrying.  OK, some of those are not so much majority decisions as government decisions, but they were approved of by the majority.

Without a strong independent judiciary, this country, like any other country ruled by selfish passions and money and hero-worship and self-interest, is a democracy off the rails.  Without fair-minded judges who have a higher purpose than enforcing majority opinion, we can’t make it.

And that’s the argument for the government we have, where the Supreme Court may soon decide that Prop. 8 and DOMA are unconstitutional.  Where democracy can be restored.

And if Scalia and Thomas decide the way we think they will?  And if three others join them?  Will I still be such a fired-up supporter of the courts as Superman heros fighting mob rule?

We live in interesting times.