As long as you do it al dente

Don’t you absolutely love this kerfuffle over what Guido Barilla said the other day?  His before-your-eyes pitch into the abyss?

Mr. B, the “Colosso dello spaghetto” is eating humble pie.

One Italian newspaper referred to it as Barilla committing harakiri.  "Mai una famiglia gay nei nostri spot.  (Never a gay family in our ads)."  Superhunk Ahmed Shibab-El Din at HuffPost brings an Italian journalist in to explain the Italian boycott of Barilla - and the hashtag #boicottabarilla.   She declares the story "quite a big deal" in Italy.

Barilla opined as to how his noodles really are intended for one man/one woman couples.   At least he said last week that he would not include gays in the company’s ads “because we like the traditional family.”

“For us,” said Mr. B., “the concept of the sacred family remains one of the fundamental values of the company.”   He also had some negative thoughts to let out on the topic of gay adoption.

“If gays don’t like it,” he said, summing up, “they can always eat another brand of pasta.” 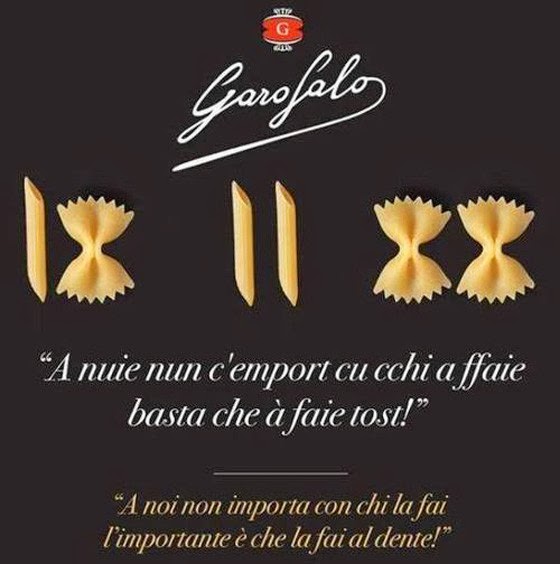 Other pasta makers recognized a fantastic PR moment when they saw one.  In no time flat they were out there posting gay-friendly ads.  Garofalo's (left) reads (in both standard Italian and in an Italian dialect) "It doesn’t matter to us who you do it with; the important thing is that you do it al dente!" 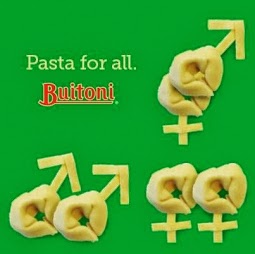 Buitoni (right) made it very clear their idea of "mangia bene" customers come from all walks of life.

Bertolli (left) shows happy noodle couples dancing on a spoon, playing with the male/female shapes in the same way Garofalo does.

And, speaking of ganging up on poor Guido, even Guido’s brother, Luca, threw him under a bus.  “In the past ten days,” Luca announces, “dozens of our clients around the world have asked for clarification over the words pronounced by (my brother) Guido.”   “All I can say,” says Luca, helpfully, “is that the agency is not responsible.” 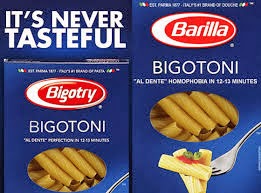 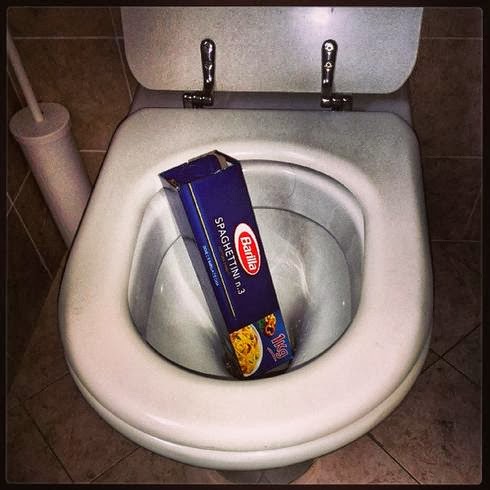 Still others let fly their negative take on Barilla more directly, from Barilla in the pot (left) to putting the bigotry into Barilla's traditional bigotoni (right) - "al dente homophobia in 12-13 minutes." 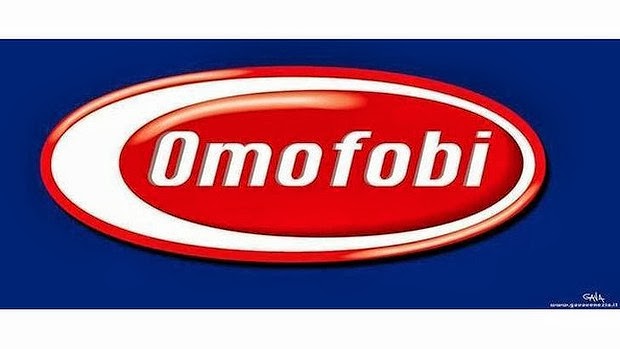 So much for casual remarks uttered when you think the world is not watching.  Just like the pastor in New Brunswick I blogged about the other day, Guido gets up and tells you how much he just loves them gays – some of my best friends, etc. etc. – never meant no harm, yada yada.

This gives us an opportunity to show some class and some grace and accept his apology so we can all now move on to more important things.  Like watching Antonio Banderas talking to a chicken, maybe, in another ad for a Barilla product.

If you listen to the guy, he’ll break your heart.  Sounds sincere as hell.  Really really sorry, guys, he’s saying.  The tone is just right, the facial expression is humble and looks sincere.  Watch for yourself here.  And then read the commentary.  Most of it is in the nature of “Never liked your rotten pasta, anyway,” and "See if I ever buy Barilla again."  Like this one:

NOTICE: the camera only recorded him from above the waist to disguise the fact that his pants are on fire.

Like most things that go viral, the commentariat quickly goes off the rails.

“I’ve emptied my kitchen cabinets of all his pasta,” writes one commenter.

Nice going, moron, says the next commenter.   Use the head for something beside a door stop.  The trick is to not buy any additional Barilla products, not throw away what you already own.  How’s that going to hurt his pocketbook?

But people need to vent.  And venting, if this case is any indication, sometimes works.  Yet one more poor sucker is learning the risk of living in the instant information age.  How many people are going to be tripped up by Twitter before we all realize nobody is safe to say what they really think anymore.  Not, that is, if they want to get elected to political office or, like Mr. Barilla, to make a buck.

I’m delighted that gays and their allies are getting smart and using their clout to call people on their bigotry.   Glad to recognize how far we've come in fighting homophobia.  To see that ordinary citizens have power, if they only know how to focus on the right places and use that power.

That's the glass half full perspective.  I’d love to think of it as a way of seeing the evolution of an ethical consciousness.  But I also see it from the half empty perspective.  I’m pretty sure this is less a learning moment and more a story about risk mismanagement.   To do business these days, you definitely have to keep your finger up testing the wind.  Capitalism is, of course, neutral here.  If the winds were blowing in a homophobic direction, all sorts of gay-friendly corporations would get gay-unfriendly.  That’s no secret.

A third aspect of the story is what’s actually going on inside Mr. Barilla’s head.  Is he simply eating crow because a whole lot of his employees and family member investors need him to fix this mess?  Or is he listening to the words coming out of his mouth and thinking, “Hey, I guess I really was wrong.  Probably should have thought that one through a little better.”

We may never know, and in the end, if fear of being exposed as an asshole prevents people from being assholes, I’d say we've come out ahead.

The long slog toward gay liberation began with some very small steps long ago.  And we’re not there yet.  We’re still getting there, one noodle at a time.

(The devil made me say that.)

Just to show there are no hard feelings, I believe you, Guido.

I’m going to buy me some Barilla this very day.