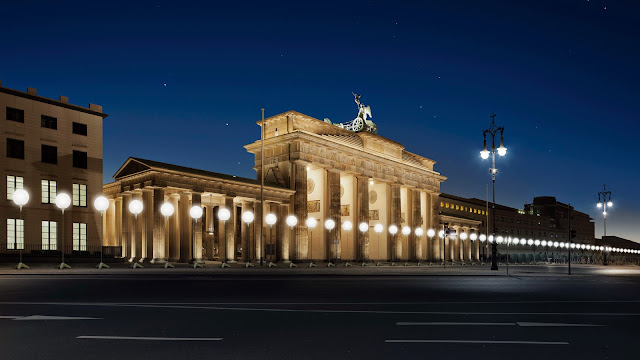 I'm still tracking the celebration of the 25th anniversary of the fall of the wall in Berlin, and replaying in my head the 101 reasons why I should have gotten my bones on a plane and gone for the festivities. Near the top of that list is this marvelous creation of two very talented brothers, Christopher and Marc Bauder, the "border of light" project - 8000 balloons lining the path of the the wall, now gone from the city and fast disappearing from memory. More on that in a minute.

Remember the massive art projects of Christo and Jeanne-Claude, where they wrapped things for the fun of it?  Bridges, islands, trees? 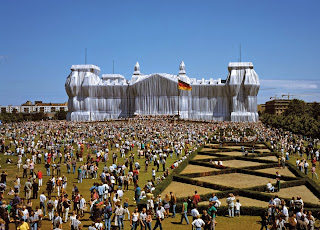 And the Reichstag, in Berlin, which they wrapped in 1995?

What a powerful symbol this wrapping up was of that grand old classical structure, which had taken on such sinister associations as the place where Hitler got his start. Remember the Reichstag fire in 1933, which the Nazis blamed on the communists?  Hitler got then president Hindenburg to issue the Reichstag Fire decree, which suspended civil liberties in Germany and got Germans into a panic about a sinister and fearful enemy which they would then turn into support for the Nazi Party’s “all means necessary” approach to governing.  (And we can then argue over how necessary it is for the NSA and ATT to record every last telephone conversation that takes place in the U.S., which has suspended habeas corpus, tortured suspects and sent them to places like Syria – ah, that lovely word - "rendition" – held secret trials and threatened people with jail for even revealing that they are taking place - because “terrorism.” – Ditto for the U.K., by the way.) 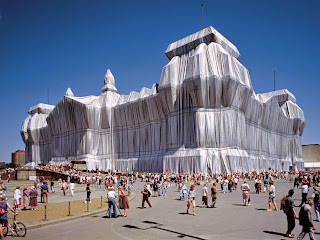 But I digress. Back to the Reichstag. Then the Russians came in and raised their flag over the Reichstag, to mark the victory over the Nazis. And it looked like it would have to go, so dark and ugly it had become in the war, as dark and ugly as the regime it represented.

But then a magical thing happened. Cristo wrapped it up like a package. And when they unwrapped it, it was as if it was something brand new. It soon became the symbol of the new, reborn Germany. Today it is a magnificent building, with a dome added for tourists to climb up into and look down into the chamber where the German parliament does its 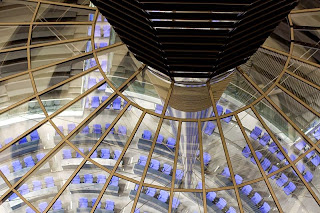 work.  And out over the reunited city.  An accessible place, accessibility being the mark of democracy.

And now there is another one.  Two brothers, Christopher and Mark Bauder came up with the idea of reminding people that a wall once ran right through the middle of the city of Berlin, dividing its inhabitants into two separate and antagonistic worlds.  They did this by creating a wall of helium balloons, some 8000 of them, on stands, and lining them up along the 15.3 kilometers (some nine and a half miles) where the wall used to stand.  Here is a good overview.    And, since this is 2014, there is of course a Facebook page.   I can't do it justice here on this site with one or two photos. Go to Google Images and type in Lichtgrenze, and you'll get a much better sense of the scope of this project.

It’s not an original idea; it’s been done before on the border of Thailand and Cambodia. But it is no less powerful as a symbol of a wall which, when the time came, floated up and disappeared into thin air.

The line of balloons was called the Lichtgrenze, literally the “border of light.”  During the celebration of the Fall of the Wall anniversary the other night, November 9th, the balloons were released one by one.

Living for so many years with this seriously depressing heartache that was the forced division of the city and imprisonment of half its people behind a wall, you can’t just wipe it all away as if you were flipping a switch.  The human spirit cannot stand such abrupt anticlimaxes. It needs time, and ways to process the changes. You can't just say once there was a wall and now there isn’t a wall anymore.  That's where artists come in.

And great moments of liberation, such as the fall of the Berlin Wall.

What a service these people do when they create art projects to accomplish this end.The Cristos of the world. And the Bauder brothers. Wildly imaginative projects. Absurd in their conception. Ridiculous in the telling. And magnificently inspiring in their realization.

Have a look at this marvelous photo by Sean Gallup Getty images.  It's copyrighted, so I won't post it here.  Here's the link.

view into Bundestag from dome

Credit should also go to the Robert Havemann Society, who helped pull this off.  They are an organization dedicated, according to their website, to the “history and experiences of opposition and resistance in the DDR.”    They have also been involved in creating “100 Wall Stories” - an open air exhibit placed every 150 meters along the path of the wall, recording protests, deaths, and other events of resistance within the DDR.


And to Kulturprojekte Berlin, a non-profit organization that manages city-wide culture events such as Berlin Music Week and information services about the museums and other aspects of the cultural life of Berlin.
Posted by Alan McCornick