The Pastor and his Husband 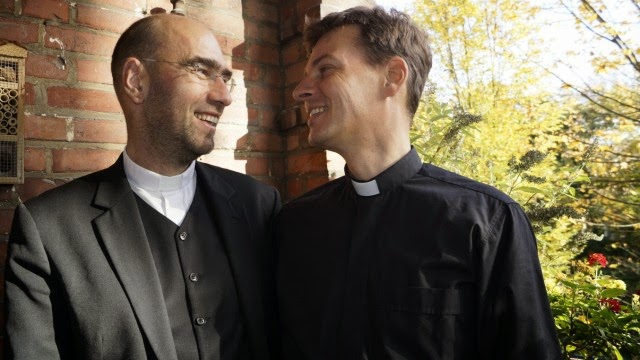 I came across an article in the Süddeutsche Zeitung yesterday about two gay men living together in Lichterfelde.  Both are Lutheran pastors, and both have congregations that appear to be accepting of their sexuality – not merely tolerating it, but actively accepting it.  One is pastor at a church in Kreuzberg, the other at Martin Luther Church in Lichterfelde, barely two kilometers – a 20-25 minute walk, give or take, from where I lived as an American soldier in Berlin in the early 60s.

That was in the Andrews Kaserne, a barracks that once served the SS but in my day housed the Army Security Agency troops who went to work every day on top of Teufelsberg, listening in on the conversations of East German communist party officials, as well as keeping track of what the Russian troops were up to in East Germany and Poland.  A heady time for a 23-year-old cold warrior.

That sounds like I'm boasting.  Don’t mean to.  It was the height of the Cold War and I was in uniform, so that makes me a cold warrior, in some people's eyes.  I was not dodging IEDs or sniper fire, wasn’t risking my life in any way to make the world safer for democracy or anything like that.  I was just climbing into a bus and going to work every day in a windowless room, with headphones, digging through miles and miles of taped conversations for anything that might be of interest to the NSA folks back in Fort Meade.  And then going back to the barracks at night and having nightmares.  Not about the Russians.   I was coming to the realization that I was gay.

Being gay in those days, at least in the world I was raised in, was a shame of such horrendous proportions that the fact of the matter had to stay submerged in the subconscious.  And what created that shame, what forced me to live in absolute denial, was the fact that I was raised in a religious home.  It was religion that taught me to hate my instincts, religion that kept me in a constant state of self-loathing, religion that made me feel I was born with a twisted sinful sexuality that I would have to escape somehow or spend my afterlife in eternal pain and suffering.

Lutherans are not the most regressive of religious groups when it comes to homophobia; they are, in fact, relatively progressive.  But it was the Lutheran Church that I claimed as my religious home from the time I first took on an adult’s understanding of Christianity.  They were not a source of comfort in my struggle to understand my sexuality.  They were close to the source of the problem, the folks who believed God had directed that “man who lies down with man” should suffer eternal punishment.

So imagine my surprise when I come across this photo of two men, Lutheran pastors both, one of whom pastors a church in Lichterfelde, two kilometers from where I first came out to myself.  And they are featured in a major German newspaper as a sign of the times.  A new age of acceptance for lesbians and gay men.  Not just in society, but in the church itself.

We’ve come a very long way.  And not all of us made it.  My friend Merrill, the first person I shared my self-discovery with, was also gay.  He came from a Mormon family in Utah.  In a few years we would leave the army and Berlin and share an apartment in San Francisco.  He was a kind of mentor to me, having accepted his sexuality – or so he said – way before I was able to accept mine.  A few years after that time, after becoming a lawyer and establishing himself out in the larger world, he was visiting a brother in Texas one day, got hold of a loaded rifle, and shot and killed himself.  Religion of the Mormon variety was even more hostile to homosexuality than religion of the Lutheran variety, and, as the youngest of twelve children, he simply couldn’t handle being ostracized by his Mormon family.

I can’t tell you how many times I have lain awake at night wishing he might have held out.  He died in the early 70s, before Stonewall, before Harvey Milk and the gay liberation movement, and before he was able to read, as I was yesterday, about two pastors of a Lutheran church, two kilometers from where we met, who were living as a happily married couple.

Things have been looking up lately for gay people in Germany, in the United States, and elsewhere, at least in the modern world.  Not so in Uganda, of course, where American fundamentalists have persuaded the locals to demonize gay people.  Or in Russia, which picked up the habit of scapegoating gay people as a way of rallying religious and other conservatives.  But in the world where I live, at least, life has improved for gay people.  I was able to marry my partner last year and nobody I talk to who sees my wedding ring seems concerned it identifies me as a lifetime mate of another man.

Most of you will not want more detail on the lives of these two Lutheran pastors from Lichterfelde, but I made the effort to provide an English translation of the article, just in case.  You can read it here.   As always, apologies for the liberties and the errors of translation.  It is, I believe, “close enough for government work.”

I also want to mention in passing that I went to the website of Pastor Zabka’s church and found their mission statement, and have appended that to the translation of the Süddeutsche Zeitung article.

Look at #4 of that statement:

We are open to people in different life situations and life styles with different gifts and abilities.  We listen to one another and are open to new ideas.  We understand this diversity as enrichment.

Pretty cool for a church group, don’t you think?