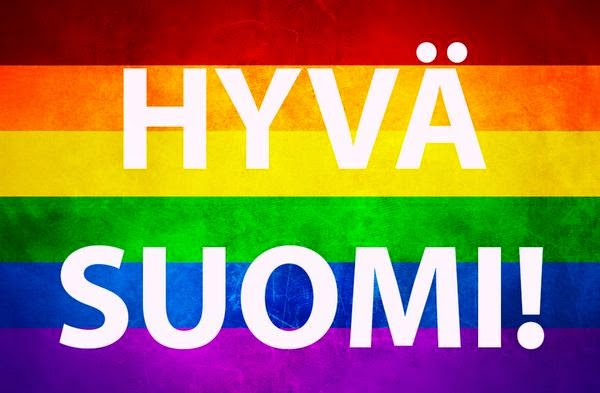 Have a look at this YouTube featuring Jani Toivola.

If you don’t know who he is, or anything about him, give yourself a little test.  Without reading further down, click here and have a listen for a minute or two.  Click on CC if you want to know what he’s saying in English.  Then ask yourself what language he is speaking.

He’s got a warm smile and a terribly expressive face, and he’s a pleasure to watch as he tells his tale of growing up as an outsider, and the bullying he had to endure as a result.  And as he talks about coming to an awareness that he has to take charge of his own life and not let it be governed by the bullies, my guess is you will respond as I did, with admiration.

He’s black.  He’s gay.  And he’s Finnish.  Not just Finnish, but a member of the Finnish Parliament, one of the 105 members who voted today (against 92) to grant full marriage rights to lesbian and gay people.

Toivola is a member of the Green Party and, according to his web page (and given the caveat that I’m working from a Google translation) interested in human rights and developmental issues.  He has traveled all over Finland speaking to youth groups on the issue of pride and self-respect.  He is also chairman of the board of the Finnish HIV Foundation and a member of the Finnish Refugee Council, and the Mental Health Advisory Board.  Pretty solid credentials.  On paper, at least.  I have no idea what he’s like in person.  I just came across this mention of him this morning when his picture appeared on the Buzz Feed website, being embraced by Alexander Stubb, Finland’s prime minister.

When Rhode Island crossed over the line, I celebrated as a New Englander.   It became the sixth and final New England state to approve of this long-awaited civil right.  I feel Finland deserves the same kind of recognition, since it follows Iceland, Denmark, Norway and Sweden, as the last-but-not-least Nordic country to do the same.  And, after the decision Tuesday (Nov. 24th)  in Mississippi to remove the ban against same-sex marriage there, it almost feels like we’re finally getting ready for the big finish line victory, the right of lesbians and gays to marry in all fifty of the United States.  We watch developments at the Supreme Court with bated breath.  Ruth Bader Ginsburg had a stent put in her heart the other day and that was a tad unsettling.   It’s hard to imagine the Supremes sitting on this decision without her around.  It’s most certainly not a done deal and all sorts of people are still throwing tacks in the road to slow the race down.

But one takes deep breaths at the failures and celebrates the victories. You’d think it would get old, or maybe just a little bit ho-hum, to mark all these landmark leaps forward in LGBT rights.  It doesn’t.  Not for me.    I mention Jani Toivola because he’s part of the Finnish effort behind the same-sex rights legislation there.  Oras Tynkkynen, also of the Green Party, was actually the first to put the idea forward.  And there have been others; it obviously was not a one-person effort.   In the end, even the center-right prime minister supported it.   The law will not take effect until 2016, alas, but it’s done.  And Jani gets to sit in the sunshine as the current Green Party representative in the fight, as Finland crosses over officially.   I know nothing of the details, and would mention others if I knew who they were.

Members of the left, the socialists (The Left Alliance) and the environmentalists (The Green League) supported it unanimously (12 out of 12 and 10 out of 10, respectively) Social democrats, Finland’s labor party, were nearly unanimous (37 for, 2 against).  At the other extreme the votes went the other way.  The Finnish equivalent to the Tea Party, the Finns Party, had only one vote in 37 in support, and all six members of the Christian Democrats voted against.

There is an interesting aspect of the struggle for gay rights in Finland worth mentioning.  As is pretty much the case no matter where you look, homophobia in Finland is centered in the churches.  Just as many once grounded their anti-Semitism in religious scriptures, anti-gay bigotry today is likewise grounded in an understanding of scripture by folk convinced they are doing the work of the Lord.

However, what’s going on in Finland suggests that it’s not so simple anymore.  You can’t just line up the church people on one side and the non-churched on the other and think you’ve made a division between the good guys and the bad guys.  The line now splits the churches, at least in the modern democracies, right down the middle.

Four years ago, in October of 2010, the YLE, the Finnish Broadcasting Company, televised a debate on the topic of same-sex marriage and the right of lesbians and gays to adopt.  The debate took place on a Tuesday evening.  By that Friday evening, so many people were put off by the anti-gay remarks made by Päivi Räsänen, a religious zealot,  that some 7,400 of them had cancelled their membership in the church.  By Sunday, that figure had reached 18,000.  Since the church in question is a state church, and pastors’ salaries and other expenses are paid out of church taxes on members registered with the church, as was once standard practice in other Lutheran countries in Europe, this move is estimated to translate into a net annual loss to the church of some two million euros.  Bigotry costs.

But here’s where it gets interesting.  Whether it’s money talking, a sincere change of heart on the part of a now critical mass of the church’s members, or nothing more than an illustration of the sea change in attitudes toward homosexuality now evident in all the modern democracies, Ms. Räsänen was roundly criticized.  Not just for being out of step, but actually for doing harm to the church.  By the Minister of Culture, no less.  Stefan Wallin, whose job includes overseeing church affairs, suggested what she was up to was deliberately chasing gays out of the church. He was quoted as saying if Ms. Räsänen’s purpose was “to turn the clock back and reduce congregation numbers” she needed to be up front about it and not “duck the consequences when her selective view of humanity influenced both the reputation and economy of the church.” (italics mine)

Even the Finnish church’s leader,  Archbishop Kari Mäkinen, has complained about the bad rap the conservatives have given the church, arguing the church is far more pluralistic than they would have it appear.   Not only that, but Mäkinin  was himself is a strong supporter of the new legislation and wrote on his Facebook page today, “I know how much this day means to the rainbow community, their loved ones and many others. I rejoice with my whole heart for them and with them.”

The good archbishop seems to be caught in the middle.  Not only is he criticized from the left for being too slow to distance himself from the “Christian values” crusaders like Ms. Räsänen, but then he has to deal with the likes of Ms. R herself, and others like her inside the church.  Ms. R. seems to be undaunted by her television debacle, which started the exodus from the church in 2010, when over 83,000 Finns left the church, compared to less than 44,000 the year before.  She is the Christian Democrat who led the battle against approval of today’s legislation, and is now going down in flames.   It's one thing for a bishop to differ with his parishoners over things; it's another when they are eating your church alive.

Unfortunately for the church’s liberals, it is the hardliners and their loudly touted “Christian values” who seem to be heard and taken more seriously.  Many have had only a casual connection to the church, but stayed registered, either for sentimental reasons (what would grandma think?) or "just to be safe" like Pascal, or simply because they hadn't given it much thought and it "seemed like the right thing to do."  But increasingly, these people are finding the church so irrelevant that the question has shifted from "Why leave?" to "Why stay?".  They are slowly but surely slipping away, despite the progress the church has made in keeping up with the human rights awakening.  Consider, for example, how much more forward thinking European Lutherans are than Catholics when it comes to women’s rights.  The “four bishops,” above, are, from left to right, bishops in the Lutheran church in Sweden, Finland, Germany, and Denmark.  And then consider how far beyond them secular Finland is. On the left is a picture of Jani Toivola being introduced to the President of Finland.  And who's that next to him? Mr. Gay Finland, whom he had the temerity to dance with at the Independence Day Ball (below). 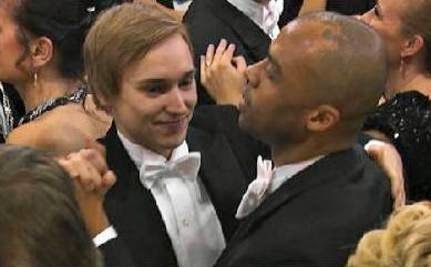 Problem is, the conservatives continue to live out their 19th century fantasies of the perfect society as more in keeping with God’s plan than the ways of today.  Slavery is out.  Galileo is in.  One no longer gets the death penalty for failing to register one’s membership in the Finnish state church.  But women need to recognize God made them to be subservient to men.  And gays are just plain evil.  You know.  19th Century.

In the U.S., the National Organization for Marriage is on the rocks and it’s 19th century folks who run the Catholic Conference of Bishops, the Mormons, Baptists and Pentecostalists.  But they too, at least some of them, seem to be slowly backing off on their programs of demonization of LGBT people.  They may even be up to 1950 by the middle of this century.   And by then, we may have forgotten about them entirely.

This is Finland’s day in the sun.

photo credits:
Jani Toivola
the four bishops
hyvä Suomi is from Ilkka Turunen’s twitter at #tahdon2013 - my understanding is this is a pretty good equivalent of “Bravo Finland”
Jani Toivola with Mr. Gay Finland and the President
Dancing Queens