Sometimes you just get it wrong 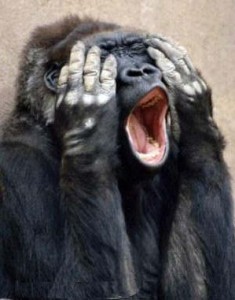 NBC News reported just now that Pope Francis has weighed in on the right of government officials to follow their consciences and not obey the law when they believe to do so would run contrary to God’s will.  Let’s call that the shit hitting the fan.

Between you and me, this is gotcha journalism.  Somebody asked the pope a question and, whether he realized it dealt with the Kim Davis case or not,  he gave what is probably a sincere response.  Given time, I can imagine he might give a sincere response reflecting a different position.  I can imagine him quoting the familiar “Render unto Caesar…” line, for example.  But I predict (and I’ll be happy to be proven wrong) this remark of his is going to cause a stir.  For a few days, at least, until the next media sound bite alarm is set off.

I also imagine there is going to be some backtracking here.  The pope, or his supporters, some of them, are going to argue he wasn’t actually interfering in American politics; he was merely restating church doctrine, which everybody knew he was going to do all along.  And he has stated repeatedly, remember, that we ought to stop our confrontational ways and stress the kinder gentler message the church wants to preach. But the toothpaste is out of the tube and it’s not going back in.

What’s going to be missed on the left, as gay rights supporters get their knickers in a knot – love that British expression – is that the pope is absolutely right.  One should be free to follow one’s conscience.  No government should be allowed to make a person go against his or her conscience.  If I believe a law is immoral I have a god-given right (and I don’t need to believe in God to say this) to ignore it.  It’s called civil disobedience.  Let’s not forget, however, that I have to suffer the legal consequences – my ass may end up in jail. I have a moral right to act according to my beliefs, but I don’t have a legal right to be free of the consequences.

And then there’s another, ultimately more important, issue. Sometimes your conscience has things wrong.

The whole notion that Kim Davis has a god-given right to act on her conscience assumes that there is a moral reason for disparaging gay people.  And when you want to know where that comes from, the trail takes you back to the church door.  The pope is wrong, and ultimately cruel, when he preaches that there is something morally disordered about gay people.  Both are interpreting a biblical injunction against same-sex relations and elevating the issue in importance over adultery and divorce, to the level of murder and theft.  The pope is equally wrong about insisting we have sex only when we are set on making babies.  This isn’t the only messed-up item on his priority list.

Amidst all the adoration of this gentle man, much of it well-deserved, in my opinion, we must not lose sight of the fact that this fellow represents a medieval world view in which homosexuality is a threat to the family because it suggests sex is about something other than making new souls for the Lord.  A world view in which women need to play their role as wives and mothers and not confuse things by trying to be priests and CEOs.  It is possible to be a warm grandpa type you just want to hug and be a representative of an antiquated world view at the same time.  It’s time for a reminder that the values of Western civilization have evolved since the church called all the shots.  We now believe, contrary to church teachings, that all human beings – regardless of sex and gender, race and creed, should have equal rights before the law.  Time to say it loud and say it proud.  We have made great social advances over many of the world views of an anti-democratic old boys network from yesteryear called the Roman Catholic Church.

Kim Davis is an American citizen who is breaking the law.  There is a church-state conflict going on here, and we need to make sure the state does not back down. Those of us who depend on the American Constitution to protect us from religious bigotry are lost if one or another religious bigot – even a warm wonderful old man bigot from Buenos Aires – is allowed to call the shots.

All the pope’s remarks on civil disobedience have accomplished is to keep the debate going on whether homosexuality is evil.  If it isn’t, there is no cause for civil disobedience and the question of whether Kim Davis is behaving well is moot.

The pope is right about some things, wrong about others.  He is right, in my opinion, about climate change, right about our need to get rid of the death penalty, wrong about women and gays.  That’s my opinion.  If yours differs, let’s at least recognize that this is not God who has spoken; it is a man with a perspective and a whole set of human limitations when it comes to understanding right or wrong.

We’re being obliged to relive the Kim Davis issue.  OK, so we’ll do it once more…

She is not acting on those particular prejudices held by an uncomfortably large number of Americans.  She is refusing to do her job and give marriage licenses to lesbians and gay people because she thinks they are sinners and helping sinners is wrong.  She is misguided and she is breaking the law.  We should throw her ass in jail and get really mad at her.

We shouldn't stay mad, of course.  But we shouldn't let her off the hook, either.

The pope is back in Rome.  I understand he had a wonderful time and finds Americans especially friendly.

I’m a fan, Jorge Bergoglio.  Would love to have you as my grandfather.  (OK, so you're only three years older than me.  But you would do the job so well!)

So glad you had a great time in my country.

Hope you’ll change your mind some day about gay people.  (And women, while you’re at it.)

Wish you well, in either case.