Not really a dilemma, actually 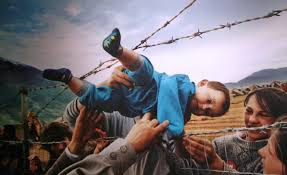 We sometimes forget the definition of dilemma.  It means a struggle between two choices, both of which have claim to legitimacy.  When you have good fighting evil, you may prefer evil, but you know what’s right.  When you find yourself facing a dilemma, you know you’re going to lose something no matter what choice you make.  And you're likely never to know if you made the best decision.

People are speaking of the refugee crisis as a dilemma.  Institutions in the receiver countries are swamped.  They can’t process all the people, can’t house and give them medical care, find them schools, teach them the local language and see to their rapid integration into society.  Or so they claim.  This is debatable, and one wonders if more money and manpower wouldn’t do the trick.  (I think they would, but that may well be nothing more than wishful thinking on my part.)

The other side - my side - says this is not really a dilemma, because these are human beings in dire need.  The picture of the three-year-old who washed up on a beach in Turkey has gone around the world and in this case the hundreds of thousands of words that picture was worth have turned all sorts of people around.  Yes, they are saying.  Open the borders.  Bring in the volunteers.  Let’s get to work.

I blogged yesterday about how glad I was to have some good news for a change and how proud I was of the people of Munich, especially those who went outside and beyond the governmental organizations to organize themselves on Face Book.  Really heartwarming that 3000 people who had walked across desert, crawled under barbed wire, piled into rubber dinghies, got separated from their children and other loved ones and faced thugs and hostility all along the way, finally saw a welcome sign.

But no sooner do I push the “post” button on the blog than I get an e-mail from my cousin in Hamburg.  She’s exhausted from processing asylum seekers through X-ray machines all day looking for TB and feels she needs to find another job or collapse.  It’s one thing to know what the right thing to do is – take in desperate people – and another to be able to do it.

The solution is obvious.  Apply more resources.  But that becomes a political question and everybody knows government is not good at acting quickly.  Look at Katrina, if you have any doubts there.  And we can't ride roughshod over all the questions conservatives have - how many criminals and other serious undesirables are piggy-backing on the refugees; what about the national brain-drains we are causing; how do we deal with all the impracticalities?

A quick aside here.  When the U.S. was taking in Vietnamese refugees after devastating their country, they tried distributing them around the U.S. But as soon as the refugees got two nickels to rub together they found their way back to friends and family, to places with a critical mass of their home folk so they could find restaurants serving pho and churches that would say mass in Vietnamese.  To scatter people is to destroy their culture.  It's a bureaucrat's solution, not a seriously considered one.

The image of the volunteers driving in from outlying towns to help bring food and clothing to the refugees at the Hauptbahnhof makes you feel good about the human race.  But it also makes you think there is something tragically incompetent, and possibly worse, about the German government.  So I decided it was time for a little fact-checking.  Munich’s Süddeutsche Zeitung, a left progressive paper and one of Germany's most respected, published some statistics on the refugee crisis which turn out to be very informative, I think.

I’ll put them in the form of Q&A, as responses to questions posed by the law-and-order folks worried about being swamped by “more immigrants than one can be expected to handle.”

Q1. Why can’t the Arab countries take in more refugees?  Why must they come to Europe?

A1. In terms of the ratio between refugees and number of citizens of the country, the wealthy countries of Europe aren’t taking all that many.  For every refugee that ends up in Bavaria, there are 142 Bavarians.  For every refugee in Jordan, 11 Jordanians.   UNHCR figures cited show the number of Syrian refugees in Europe to be at 123,600, according to a survey done in July 2014.  Compare those numbers with 363,576 in Iraq and Egypt, 602,182 in Jordan,  789,678 in Turkey, 1,117,095 in Lebanon. [Note: these figures are of necessity dated and no longer give an accurate picture.  But they nonetheless correct some of the worst assumptions, I believe.]

Q2. But that’s only Syrian refugees.  What about the total number of refugees?

Q3. Still, isn’t Germany taking in more refugees than anybody else in Europe?

A3: No.  They are fifth in terms of refugees per one million inhabitants, after Sweden, Hungary, Austria, and Malta.  To be fair, that’s still a lion’s share compared to most countries.  Portugal: 55; France is at 970, Finland at 715, Britain at 490, Ireland at 385.  Also, to be fair to most of the countries with low numbers of refugees, they tend to be those farthest away from the entry points, and often, like Finland, several borders away.  To attribute these low numbers to hostility and xenophobia exclusively would be going too far.

Q4. The strongest opposition to taking in asylum seekers seems to come from the states of the former East Germany.  Is that because they are taking the most?

Q6. How is it Germany takes so few, then, relatively?

A6. According to the regulations established by the European Council on Refugees and Exiles (ECRE), known as the Dublin agreement, responsibility for refugees falls on the first country a refugee seeks asylum in.  Since Germany is surrounded by other EU countries, they are off the hook – at least according to these regulations.  These regulations are now being recognized as detrimental to the best interest of refugees.  According to the ECRE’s official position statement on the matter, “Ultimately ... the Dublin Regulation should be abolished and replaced by a more humane and equitable system that considers the connections between individual asylum seekers and particular Member States.”

Q7. Isn’t the problem, though, that along with “legitimate” refugees are a whole bunch of “economic refugees” – people whose lives are not at risk and are only coming to make more money?

A7. The distinction is bogus.  Most come from war-torn areas like Syria and Afghanistan.  But many come also from places with economies destroyed by recent wars, places like Serbia and Kosovo and Montenegro and Albania and Iraq.   Kosovo, despite its valiant attempt at independence, cannot stand on its own.  It has an unemployment rate of 50%.  In Albania, unemployment is a mere 18%, but 7% of the population, according to World Bank figures, live on less than 55 euros per month.  It most cases it would be accurate to say that refugees come not for a "better" living so much as for an "adequate" living.

Q8. After all is said and done, though, in the end aren’t refugees a terrible burden on the German economy?

A8. Asylum seekers cost the economy 12,500 euros per refugee.  That’s about 3.3% of the GDP.  On the other hand, each foreigner living in Germany pays about 3300 euros more in taxes than he or she receives in benefits.  With education and training, that ratio of payments to benefits increases.  It is in Germany’s best interest to take these people in, give them an education, and make them productive contributors to the economy.  It is estimated that those given residence will end up contributing 118,400 euros to the economy on average over their lifetime.  The challenge is to get these people educated.  At a rate of 200,000 new immigrants per year, if even only 30% of them are “highly qualified” and 50% of them are “average qualified” the average German’s tax burden will be reduced by 400 euros.

I am taking these Süddeutsche Zeitung figures on faith.  As always, the devil is in the details, and the details need to be checked, and checked again by people with the ability to assess them correctly and accurately.

But this is what I’ve come up with so far, such as it is.