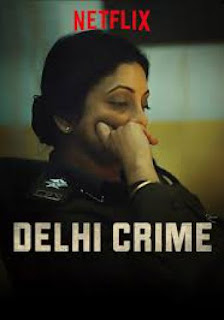 Who doesn’t love detective fiction? A wonderfully primal genre, a Manichaean struggle between good and evil, good guys fighting bad guys. It’s a parallel genre to cowboys and Indians, except that these days we are a bit more sophisticated. Instead of a single Lone Ranger type, a perfect human superman who rides in on a white horse to save the day, we have shades of grey. The detectives have flaws and appear more human. They struggle with drugs, alcohol, relationship problems, and demanding work requirements give them too little time to raise their kids properly.

If you impose on the detective story a tale of a woman police inspector living in a man’s world, beset on all sides by corruption, cowardice and incompetence, you’ve got yourself one hell of a feminist drama for the modern age. Now locate the whole thing in Delhi, in India, and make one of the leading characters the city of Delhi itself, and you’ve got a winner that almost can’t fail. Of course, somebody has to make it happen, and for that we have these wonderful new producers, chiefly Netflix, Amazon Prime and Hulu, turning out dramas faster almost than we can watch them.

That’s the background to the detective story that is Delhi Crime. The crime in question is a brutal rape and murder, the details of which make this story almost too brutal to watch. We are so inured these days to shock and horror, scandal, outrage and injustice on a daily basis that each new story has to push the boundaries in order to capture our attention, dulled by overstimulation.

Fortunately, Richie Mehta, the creator of this Netflix Original, backs off from showing the gritty details of the crime, and leaves it to our imaginations, so we can focus on efforts to track down the perpetrators instead, and on the critique of life in the city of Delhi.

A young couple board a bus at night. There are a gang of six people already on the bus, including the driver. They’ve got a scam going where they subcontract the bus as a school bus during the day and then use it to rob unsuspecting passengers at night. That such a scam is possible sets the scene for the story within the story – the struggle of the police inspector to convince her daughter not to go to Canada when all she wants is to escape what she sees as the wretchedness of her home town in India. And the raw material for raking the police over the coals – how can they permit such a gang to operate on the city streets, where any citizen may fall prey?

Vartika Chaturvedi has the rank of DCP (Deputy Commissioner of Police), a “gazetted”, or executive-level rank, officer in the police hierarchy. As the story unfolds, she reveals herself to be unusually capable, highly respected by her underlings, and a force of nature. Which force is no match, however, for the cowardice of government bureaucrats ever on the lookout for scapegoats when things go wrong and they need somebody to blame.

The series is an enactment of a true story. I can’t be sure how close the filmmakers stuck to the original facts, and I don’t want to spoil the ending, in any case. Just as you get annoyed that the filmmakers miss every opportunity to create tension by taking all of the drama out of the tracking down of the criminal suspects, and turn the chase into a fairly boring chronicling of police work, you realize tension is being created over the question of whether Vartika is going to solve the crime before the power structure scapegoats her. The press, intensely hostile to the police, has whipped up a frenzy of outrage in the general public, who call for heads to roll.

To audiences unfamiliar with India, and that includes me, part of the fascination of this drama is watching how things work in this city of seventeen million souls on the other side of the world. The shots of the jam-packed freeways from the air, buildings of crumbling concrete and unpainted walls, dust rising from unpaved roads make this a story of the developing world, which is juxtaposed against scenes of wealth and modernity, as a means of screaming at you that life isn’t fair. The lights go out regularly and the police have to borrow money from their fuel budget to make them go back on again – until they have no more money left in their fuel budget. Inspectors have to call on relatives and friends with cars to get them to work or the scene of a crime, because no squad cars are at hand.  Add to that all the scenes of police beating confessions out of their suspects, an irresponsible press, and ignorant mobs at the gate, and you've got a pretty grim reality.

It’s seven episodes of fifty minutes in length. Very much worth watching for insight into how things work in an Indian police department. My assumption that the depiction is credible stems from a strong endorsement  of the series by the Hindustani Times.   And even more worth watching for the great acting of this powerfully strong woman, Vartika, played by actress Shefali Shah. Highly recommended.

Looking forward to it ...