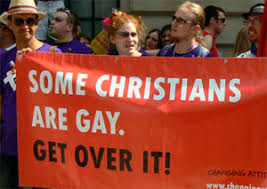 You know how when Muslims make their pilgrimage to Mecca one of the ceremonies they perform involves throwing pebbles at the devil? I love that. It’s really useful to have a bad guy to throw stones at. Soul-soothing, somehow. I loved it when I didn’t have to think before bashing the church – almost any church – for its homophobia. They were all, more or less, homophobic.

With the gradual recognition that there is nothing essentially Christian about ostracizing LGBT people as sinners, and the even more dramatic sea change among non-religious people in accepting LGBT people, the notion that one has to stop being gay in order to be Christian is falling by the wayside. The authoritarian religious groups are still pushing that bigotry – the traditional Roman Catholic hierarchy, the Mormons, the Evangelicals, but mainstream Christian groups and all but some of the most orthodox of Jewish sects have pretty much made a 180 degree turn on the topic, many now warmly embracing gay people. In 2009, the Hindu Council of the United Kingdom issued a statement that "Hinduism does not condemn homosexuality.”  Buddhists seem to fall, for the most part, between gay-neutral and gay-friendly.

Being gay ain’t all it used to be. Once upon a time you could count on gays and lesbians to rally behind another gay or lesbian person. There are not that many of us, after all, and it’s easy to get tribal when you identify with a group with a history of oppression. But things have changed.

Pete Buttigieg, the mayor of South Bend, Indiana, is running for president and I don’t know what is more remarkable, that fact, or the fact that he’s shooting up dramatically in the polls. I’ve been around long enough that I’m inclined to see that as something to stand up and shout over. Who would have thought this could happen in our lifetime?

When same-sex marriage was legalized in the U.S., some said, “We’ve arrived, at long last!” It seemed to many that was the pinnacle. But it pales, somehow, next to being able to run for president and kiss your husband in front of a cheering crowd. Evidently, arriving isn’t something that can be measured by any single kind of event.

I’m reminded of Sally Field’s acceptance speech at the Oscars in 1984 when she said, “I’ve wanted more than anything to have your respect…and I can’t deny the fact that you like me, right now you like me.” We tend to pity people who go around wanting to be liked and respected. You’re supposed to have a strong enough ego that you don’t depend on others for validation. But the truth is, while some gays – drag queens, for example – thumb their noses at acceptance, most LGBT people display the middle class need for social acceptance. And we seem to have moved on without taking a lot of time to celebrate the progress, to the next step, where we stop using LGBT as our primary identity. Two good friends surprised me recently, one by complaining that the patriarchal world we live in makes it easy for a gay man to roar ahead, while a gay woman, in her view, gets no such royal treatment. The other friend, a gay man, tells me he values political experience more than being gay, and so he’s rooting for Bernie Sanders.

My guess is that Mayor Pete will not make it to the top this time around. For all his charm and wit, he’s new to the game. But I’ll take his candidacy as a feel-good moment, in any case. Cynicism and despair are always just around the corner. Blow the horns and bring out the balloons at every opportunity, I say.

This morning a YouTube video popped up suddenly and caught my attention. It is titled, “Devout and Out: Pip – A queer priest on leaving his evangelical church & making faith more inclusive.”

Stories like these are good for me. They make me realize there’s a gap between my espoused values and my actual values. I argue that I have no trouble with religious people, that my only beef with religion is the way it is so commonly used as a cudgel. Americans are notorious for their religiosity. But when you take a closer look, you realize it’s not the spiritual side of religion that captures the headlines; it’s the tribalism. Religion is used, particularly by evangelicals – “born-agains” – as a way of marking themselves as insiders. “Real Americans.” They are currently in the seat of power, making arguments that Donald Trump with his petty self-serving nature is actually an instrument of God. These are single-issue people for the most part. Their issue is Israel for Jews only, or abortion, or holding back the tide of approval of gay rights. They are political Christians, not religious ones. And they are a loathsome lot because they put their own cultish interpretation of their scriptures ahead of the U.S. Constitution as their highest source of authority. Objective truth is not the goal of their search for meaning; “testifying” is – mouthing the doctrine. Twisting history to their purposes, they insist we identify America as a Christian nation or suffer the wrath of God. And repackaging the Jewish concept of "chosen people" to mean pre-selected for eternal bliss because of their born-again declaration.

I have trouble with these people because they fight so hard to choke off the extension of civil rights to LGBT people, not because of their doctrine. But here’s the rub. I also don’t like the doctrine. I have trouble with the virgin birth, with the resurrection, with bread and wine become flesh and blood to be consumed. I see no evidence that there is a single invisible being who answers prayer, and considerable evidence that if he exists, he can’t be counted on. So when I say to people that “I have no trouble with religion,” I’m not being totally sincere. I no longer take the issue seriously enough to want to persuade others to give up their faith in the local gods, but if the topic comes up and somebody makes the mistake of asking me whether I’m born-again, I’m quick to assure them I think once was quite enough.

Then along comes someone like Pete Buttigieg. I’m becoming a real fan. Not just because he’s gay, although I’m not above a little tribal loyalty, but because he’s so articulate. So earnest. Because his head is in the right place.  As are his values, which are my values. And mostly I’m delighted to come across a Sermon on the Mount Christian after having to put up with all these “terrible swift sword next time" Christians for so long. Don’t look now, but I think I’ve spotted a real one.

And how could I not wish him well? For years I went to shabbas dinner every Friday night and memorized the prayers in Hebrew, not so much out of respect for the Jewish religion (I find the Exodus about as convincing as history as I do the virgin birth), but out of respect for my friends who want to raise their children in a tradition which they feel provides the framework for getting through the hard times. A bit of order in a chaotic world. What’s wrong with doing that poetically? I have to ask.

But those friends are straight. Pete Buttigieg is gay, and my hostility to organized religion is so dyed in the wool by now that I’m having some serious cognitive dissonance with the acceptance of gay people by American churches these days. I shouldn’t, of course. Gene Robinson was made a bishop in the Episcopal Church in 2003, for sure, but it practically tore the church apart. Since then, however, the word “sea change” pops up regularly when discussing attitudes toward LGBT people.

If you want to see what I mean, have a look at a couple of these documentaries now available on YouTube on the impact LGBTQ people are making on the church.

There’s this one, about an evangelical once tortured by the conviction that he had to undergo “conversion therapy” (sort of like calling drowning therapy) in order to get right with God. It’s uplifting as can be to see his success, a pick-me-up story.

Or this one, about a transgendered person (the reason we have the Q in LGBTQ).

For that matter, have a look at the 2013 film, Southern Baptist Sissies, available on Amazon Prime. Overwrought by today’s standards when it comes to gay angst, but it has some great one-liners from the Greek chorus, the two drunks who sit offstage and comment. (“I’m a social drinker: You have a drink? So shall I.”)  And the entire story is summed up by one of the character’s description of the church: “This is where we come to learn to hate ourselves.”

Only six years between that and the three signs of the times I’ve linked you to, just above.