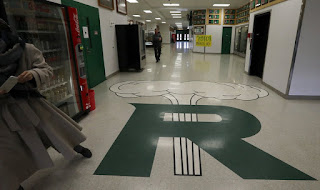 Imagine that you’re a foreign high school student from France. You get a chance to go to the United States and spend a year living with a family in Buffalo, New York. One of the first things you notice your first day of school is the image of an electric chair worked into the tiles in the entryway.

You quickly learn your way around and friends invite you to a basketball game on the weekend. When you get there, you see that all the players are wearing images of an electric chair on their jerseys. You are told it’s the school’s emblem, chosen because a well-known professor from what is now the State University of New York at Buffalo invented the method of execution and the symbol evokes local pride.

If this scenario strikes you as bizarre, then imagine you are a foreign high school student from Japan. You are from Fukuoka, not far from Nagasaki. Your grandparents were living in nearby Kokura in 1945, the site of the intended second atomic bomb drop. Because of bad weather, the planes dropped the bomb on Nagasaki instead. But for the cloudy skies, your grandparents would likely be dead and you would not exist.

You get a chance to go to the United States and spend a year with a host family in Richland, Washington. One of the first things you notice your first day of school is the image in the entryway of a big R surrounded by a mushroom cloud. You learn that Richland is the location of the Hanford Site, a nuclear production complex and home of the B Reactor, the first full-scale plutonium production reactor in the world. The mascot of Richland High School is “The Bombers” and one of the cheers at games is “Proud of the Cloud!”

The electric chair is something to be proud of. It kills bad guys when the time comes to kill bad guys.

No reason why you can’t use it as a high school mascot, is there?