The Family - the book and now the docu-drama 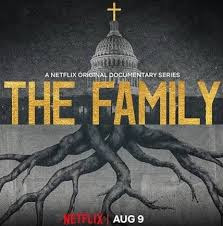 “Thou hypocrite,” rails the Gospel of St. Matthew, “first cast out the beam out of thine own eye; and then shalt thou see clearly to cast out the mote out of thy brother's eye.”

My father never went to church. “Why would you go there?” he would ask. “That’s where all the hypocrites are?” Come to think of it, I never saw him pray, either.

He didn’t prevent my mother from taking my sister and me to Sunday School and church, however. He just didn’t go himself. His was pretty much a live-and-let-live approach to the world.

I feel sorry for earnest Christians. Not only are good people leaving the churches in droves; the bad ones are staying in and turning the church, at least the American church, into a fascist organization. And by fascist, I mean an authoritarian, power-centered, win-by-any-means organization.

American Christians have always been a fractured group. They are frequently far more interested in telling you why they are the only real Christians and others who call themselves Christians are not. And that means “real” is often understood to be that which the largest number of people tell you is real. Getting at the real reality, like getting at truth, remains eternally elusive. Especially in this age of “fake news” where the general population has been convinced that since there is no way to find it, one might just as well give up and go with the gods of the tribe. Or, for the more hard-core fascists, the tribal leader as a stand-in for the Almighty.

Where Christians are particularly bad at missing the beam in their own eyes is when they describe Islam as a religion of violence, and claim, erroneously, as Ben Carson has done, that the Qur’an approves of deception in order to further the faith. Here we have a fundamentalist Christian accusing others – and getting it wrong – of doing the precise thing a large number of fundamentalists themselves do: present themselves as honest peace-loving folk when they are in fact worshipers of power and unashamed of manipulating it, by gerrymandering, by limiting the voting rights of their opponents, by packing the judiciary with their supporters to their own benefit.

And then there's the notion of "the chosen," a special inner circle of elect folk favored by God, a bit of theological poison dreamed up by Calvin that is inimical to democracy in the extreme but still alive today, to some degree, even in mainstream (non-Lutheran) Protestantism. It justifies viewing the rich as not only smart, but somehow more worthy, and makes the notion of taxing them to generate the resources it would take to give us free health care, free education through university and a minimum wage that everyone could live on a real uphill climb.

If you are not yet familiar with Jeff Sharlet’s two books on The Family, I urge you to run out and get a copy forthwith. I think the evidence of right-wing chicanery he exposes should be required reading for all Americans. And I don’t mean just political junkies, but anyone who wants to understand American society today.

In a nutshell, Sharlet exposes the myth that American Christians worship Jesus Christ, the Son of God, who preaches love, not hate; forgiveness, not vengeance; and compassion, not disregard for the widow, the orphan, the stranger in the land. They say they do – and a good many actually make some effort to put these virtues into practice – but a very large number of them - including the politically most powerful - are children of an angry God. Their God is about to bring on the end of the world at any time now; their Savior is the guy who will return with the sword this time. And their evangelical leaders, including the likes of Pat Robertson and Franklin Graham, have a surefire strategy for achieving power. Their claim is that Christians who are focused on the Jesus of the Sermon on the Mount have it all wrong. It’s not the meek who shall inherit the earth; it’s the strong. And the sooner one recognizes that fact, the better. It’s not the sheep; it’s the wolf. If you want to get ahead in this world, according to these Jesus-folk, follow the wolf; the sheep will naturally follow.

Billy Graham pioneered the strategy of making friends with presidents and kings, putting the wolf-not-the-sheep notion into practice. His intellectual successor was not his son Franklin, but two more capable evangelists who operated from behind the scenes. One of these was Abraham Vereide, the Methodist minister who came to the aid of Seattle’s most prominent business leaders in busting the power of the unions in the 1930s, and came up with the concept of the National Prayer Breakfast. The second of these was Doug Coe, who carried on Vereide’s dream of creating networks of followers of Jesus based on the idea that these followers could be of any religious persuasion.

What is controversial about The Family is the degree to which Coe’s intentions were sinister. Vereide’s support of corporate leaders' interests over workers’ interests places him in the company of the modern-day 1% working for themselves against the 99%, and nothing separates religious Christians from political Christians more clearly than the appeal to focus on the wolf and not the lamb, the essence of right-wing religion in a nutshell.

To be sure, there is evidence that cutting through the theological complexities of Christian doctrine and using the name of Jesus as a talisman has actually worked on more than one occasion to bring powerful people together, arguably more effectively than many diplomatic efforts have. What remains problematic, however, is that we cannot be certain that this a grand idea that has been ruined by imperfect followers who twisted its idealistic intentions to nefarious ends. Is it that, in fact?  Or is the wolf-not-the-lamb strategy flawed from the start?

Rather than attempt to answer that question, I’d recommend a third version of Sharlet’s contribution to understanding the intersection of religion and politics in America today: the five-part docu-series produced by Netflix, with Jeff Sharlet as executive producer, also called The Family. There are two good reviews on the series, one by Joel Keller and one by Joel Mayward, both of whom find the film less than a perfect vessel but nonetheless very much worth watching.

What is astonishing, once you let the message of the film sink in, is how many people there are who are not of a right-wing Christian persuasion  – Hillary Clinton, for example – who have added their weight to the Prayer Breakfast event, despite its Family connections.  Perhaps it's because politicians can readily understand the advantages of networking, and are willing to blur the line between government and religion and prioritize not only faith, but the Christian faith in American life when they find it expedient to do so.

If you are at least a nominal Christian, one who believes morality is tied to the Christian faith, this may strike you as beneficial. Or at worst, far more neutral than harmful. But then you can't escape the complex questions: Is Islamic fundamentalism a violent faith? And is it different, in essence, from a Christian fundamentalism that throws its support behind Republican policies that favor the rich, that support efforts to disenfranchise black voters because black voters tend to vote Democratic, that deny a climate crisis because it is in the interest of American energy corporations to maintain maximum levels of use of fossil fuels, and that separate immigrant children from their parents and claim it is because these asylum seekers are rapists and murderers in disguise?

I know it’s disheartening to encounter these questions on a daily basis, and the temptation is strong to turn away. I find myself spending an ever greater portion of my time listening and watching talented singers and dancers, streaming TV detective thrillers and defending my canine daughters from their other daddy, who likes to wrap tea towels on their heads and make them look like East European babushkas.

But I strongly urge you to watch The Family.

And read the book.

You won’t be sorry.