Look at what Americans are being treated to on the nightly news these days. Images of the very nice people of New Hampshire telling you they are trying to make up their minds who to vote for in the Republican primary. There’s Romney, the leading contender, a man who got rich shutting down companies and firing people. He’s trying to pass himself off as a job creator, and millions are willing to believe it. Then there’s Newt Gingrich, the man who led the battle to crucify Bill Clinton for sex with a woman who was not his wife at the same moment he was doing the same thing. It’s a toss-up whether Gingrich or Romney is the bigger liar. Then come two men whose strong suits are consistency and who don’t lie. Not so blatantly, at least. With Ron Paul, if you’re anti-war, you can think you’ve found your champion. Until you realize his anti-government notions, if taken seriously, would make it impossible to stop corporate pollution of the environment or pillaging of pension plans. He would also take us back to the time of segregation and argue if the majority of folks want it, it should stay on the books. Then there’s Rick Santorum, whose policies are indistinguishable from the Vatican’s. He would tell an 11-year old girl impregnated by her father that abortion is not an option. He would tell married gay people in six states that their licenses are being revoked. He would encourage local authorities to impose bans on birth control. And the good people of New Hampshire think he’s a fine man.

It isn’t hard any more for me to listen to Rick Santorum. I’ve gotten used to him, and I can console myself with the realization he plays a clown in America’s political theater. His mean provincial catholicism will run dry in short order.

What does bother me is the level of American discourse – first that these people are taken seriously and not laughed out of town by the media. And second, that people can say Rick Santorum is a nice man and completely miss the havoc he could wreak on thousands and thousands of lives.

While all this is going on, over in that other hemisphere, the one where all those socialists live, in this strange and (to Americans) baffling land called the Federal Republic of Germany, there is political discourse going on at a very different level. They are trying to decide whether to kick a president out of office.

While we are starting up the laborious process of electing a person to represent the nation, lead one of our political parties, and be in charge of the government, all simultaneously, Germany is acting out on the belief that these jobs must never be mixed up or performed by people with similar dispositions. The American way leads to impossible expectations. Our Leader has to be part Superman, part Daddy, part Human born free from sin. In most countries with divided roles, the free from sin expectations are placed on the representative of the nation – the Queen in Britain, the Emperor in Japan, the President in Germany. Prime Ministers, or Chancellors, as they are called in Germany, surprise no one when they get their hands dirty. I once thought this separation of jobs was pretty much a peachy keen idea. Still do. But it turns out it only works if the head of the nation really is free from sin. Mess it up and the consequences are pretty dire. 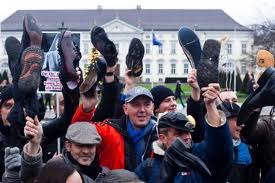 It’s not impeachment they’re facing but the possibility of resignation (Rücktritt) under pressure. If you think Bill Clinton’s adversaries were indignant when the word came out that he had gotten a blow job under the desk in the Oval Office, you ain’t seen nothing compared to the rage the Germans are in over the fact that their President used his office to get a low-interest loan.

OK, I exaggerate for effect. The real problem is that when this information got out, he left a threatening message on the answering machine of the magazine editor about to publish it. Low-interest loan plus media censorship still doesn’t bother Americans as much as a blow job, but it does the Germans. They’re waving shoes out in front of Bellevue Palace, the official residence, having learned the practice from watching Arabs show their disdain for George W. Bush. 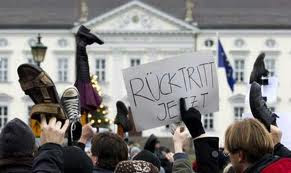 Comedians are having a heyday. Talk shows are hauling out all the pundits to twist the scandal every which way from Sunday. And what you hear, loud and clear, is that Germans feel personally insulted. This office belongs to us, they are saying. He has sullied the office of President and in so doing cheapened the reputation of Germany.

This is even more serious than it sounds, because Wulff won the election a year and a half ago in large part due to the influence of Chancellor Angela Merkel and the leading coalition. If he goes, some are saying, her government could fall. Right now, when Germany is trying to manage the euro crisis in Greece, this is lousy timing. 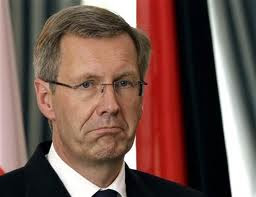 For me, the angry debate is a breath of fresh air. I’d love to see President Christian Wulff move out of Bellevue and Joachim Gauck, the man I would have voted for, move in. Wulff represents the slick modern side of powerhouse Germany, Gauck the working class side that does the dirty work of cleaning up Germany’s lousy 20th century history – and this may be a reason Wulff got the job; people would like not to have to look at that history so much. The reason I say “fresh air,” though, is that the issues are real. Not the empty rhetoric of third-rate politicians, the fratricidal street-fighting of a once-grand old party on the skids, but a debate over whether the Germans can hold on to the dream that their national (not political) Leader is a man unlike ordinary men, and not just another dirty politician.