Americans and their Guns 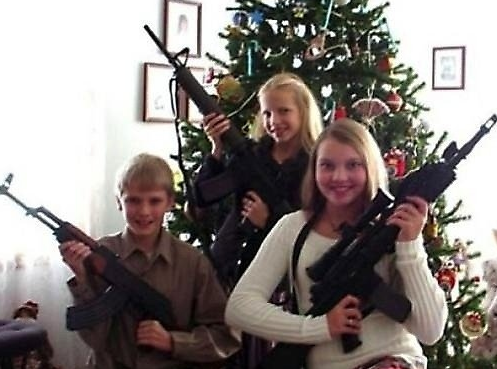 9/11 was probably the last time Americans – and many others around the world – were so totally shattered by images of sheer horror, and I think this moment rivals it.  Newtown for many, because it has been such an up close and personal look at the death of specific children with names and faces, is possibly even more devastating.


Much of the news coverage, as it was happening, struck me as obscene.  I absolutely hated watching the reporters milking it for every ounce of emotion and sympathy, as if the events couldn’t speak for themselves.  Now, at least, the shock and horror and grief are giving way to something that desperately needs to be discussed, a story of human folly, the story of Americans and their guns.  Right now the discourse is white hot.   One can only hope it will continue after it cools down a bit.

In a sense, our folly goes back to the struggle between John Adams and Thomas Jefferson over the place of religion in America.  Adams wanted the State to be run on religious principles.  Jefferson, on the other hand, saw danger in not keeping them separate.  The separation idea won out, and ironically, allowed religious groups to spring up everywhere.  While in much of our cultural homeland, Britain and other nations of Europe, state-run religious institutions have driven folk away from religion, in America, religion, unfettered, has flourished.

The religious impulse is so strong, in fact, that even when we are not bopping each other on the head with the superiority of our own various religious paths, we are sanctifying “God’s country” and treating our constitution as if it were Scripture.  Just listen to how often we hear the phrase, “defending the constitution.”   At least one right wing conservative group,  The National Organization for Marriage,  uses the word “sacred” to modify “constitution” in their website.   We are now reading the "sacred" constitution before each session of Congress, much in the way we once prayed.   Not the whole thing, of course.  We leave out the slavery parts.

Don’t get me wrong.  I’ll take the Constitution over anybody’s scriptures any day.  I love the idea that we put our hands on a bible and swear to defend the constitution and not the other way around.  But when the defense of the constitution meets American fundamentalism awful things can happen.  Like moving from the right to raise a militia to the right for an individual to own assault weapons, for example.   Our problem with guns is that we sealed off the Bill of Rights as sacred, and gave the Supreme Court the power to interpret the Second Amendment in a way that serves the Gun Lobby, and not the people.  We have rot in the constitution, and we have made ourselves impotent to do anything about it.  That said, there is light in the darkness, at least.  Justice Scalia hinted last July that there may actually be limitations to gun use.  That remark should encourage more, not less, discussion on gun control.

I'm not after specifics here.  Many others are in a better place than I am to take on the particulars of assault weapons and the issue generally, and no doubt they will, as they always do whenever we have an American gun massacre.  I’m only making the observation that we have come to a place where we should use the pain of the images from Newtown to get involved in the gun debate at some level, at least.  We don’t care about Iraq and Afghanistan any more.  Few of us ever did.  We don’t care that we torture people now and George W. Bush, the man who made that possible, is a free man, instead of sitting out a thirty-year sentence as a war criminal, as is his lacky, John Yoo, a professor at the University of California, who wrote the justification for it.    We don’t care that we have tossed aside the Geneva Conventions, that Obama has maintained “extraordinary rendition,” a policy sometimes referred to as “torture by proxy,” as government policy.

But thanks to the close media coverage of innocent little children in a quaint little New England town we like to think of us as quintessentially American (population 27,000, median income $110,000), possibly this time we can get enough people to care about the fact that we are a very sick society indeed, and it’s time for those singing America’s praises to channel some of that optimism into serious efforts to counter violence, insanity, greed and guns as a symbol of masculine strength.

To what degree guns are the problem, I can’t be sure.  I don't know that guns are the problem; I'm working from my gut.  I understand that in other places people have more violence with fewer guns.  I understand that in China recently, a man went crazy with a knife and stabbed twenty-two children at a school.  The difference between the attacks in the village of Chengping and the village of Sandy Hook is in a line that jumped off the page at me.  " ,  , , ."

My gut tells me guns are a big part of America’s violence problem – at least free access to assault weapons screams for attention, it seems to me – but I really think the problem lies in human weakness.  We don’t have the courage.  We don’t have what it takes to find a solution to America’s viciousness, its propensity for violence.  We are too easily bought off with money and too readily jerked around by our faith in miracles, in a Big Daddy who will take care of us so we don’t have to take care of ourselves. You know.  The guy we're now telling ourselves has "called those little children home."

Ruben Navarrette, Jr., who writes for the Washington Post, wrote this morning of taking his kids to church and asking the priest to bless them.  As they walked toward the altar, he tells us, “I whispered, ‘This is to keep you safe.’”

Right.  The title of his article is “No easy answers to guns.”  In a rant against those who would use this moment to rally for more gun control, Navarrette says, “Have you no decency?  How about giving a horrified and heartbroken nation a chance to mourn and bury the dead?”
His solution?   Pour a little poison in your child’s ear.  Tell him God will protect him – no need for gun control – if you just get a priest to bless you, since after all we know God is stupid enough to listen to these clowns in dresses and interferes with the normal laws of nature if you just ask him right.

I’m not the only one listening to his gut these days.  Conservative Republican Joe Scarborough, now host of the  MSNBC TV program Morning Joe, has had a change of heart and delivered a moving appeal the other day for others of his ilk to rethink the gun issue.  Give a listen, if you haven’t already.

And then listen to Piers Morgan attack first gun lobbyist John Lott  and then Larry Pratt.
One may wish for less incendiary rhetoric than Morgan’s – he got his training, after all, with Rupert Murdoch – but you’ve got to admit he’s reflecting the zeitgeist of the moment – extreme sorrow now turned to rage.

A friend of mine pointed out to me just now that you have to show your driver’s licence to a pharmacist to get a dozen sinus decongestant tablets while you can buy an armor-piercing weapon without such stricture at any number of gun fairs around the country on a daily basis.

Those who advocate no gun control whatsoever, the folk who have led us to where we are today, where we can carry concealed weapons virtually anywhere, would have us believe that if the first grade teachers in Sandy Hook Elementary School had had guns, these deaths would not have taken place.  You have to sit down and take a deep breath when you hear those arguments, and test whether your eyes and ears are working.  Never mind the absurdity of the expense of training all our teachers to handle guns, or of the guns themselves.  Do we really not know that a significant number of souls who dedicate their lives to caring for young children simply do not have it in them to pull the trigger on a mentally ill teenager and “blow him out of the water?”  And do we really think we could live in a world where that passed as a solution to the gun problem?

Do we really not understand that Adam Lanza’s mother Nancy, from whom he got the weapons, had obtained them legally?  That there is no way to lock guns up in a house where a deranged member of the family could not find the key?

It’s good that we’re having these arguments at long last, absurd as they are.  Perhaps once we get past the outrageous lie that guns don’t kill people we can get to more useful discussions about the line between freedom and license, and to the heart of the safety argument and whether we really are safer with guns than without.

With more guns than adults in this country, over 300 million in a land of 312 million men, women and children, it seems a virtual impossibility to rid ourselves of guns.  The best we can hope for at this stage is to work in the margins and get the gun lobbyists and the NRA to give some ground.  Bring the risk down a bit.   And wait for the next massacre so we can bring it down some more.  And the next, and the next, until finally we reach one dead child too many.   Then, possibly, we will come to see that sacrificing children's lives for the freedom of any fool to own a Bushmaster AR-15 rifle or a Glock 10 mm or a Sig Sauer 9 is not smart.

Next time somebody tells you it’s hopeless – and to me, at least, it certainly appears hopeless – remind them that not being able to achieve 100% sterility in an operating room does not mean we need to perform operations in sewers.