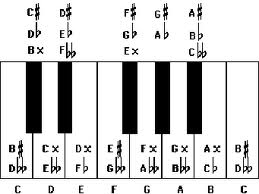 I studied music as a kid, but about all that did for me was make me aware my whole life long how much I don’t know about music.  My mother paid my piano teacher $1.25 for the hour she would spend with me each week from just before my 7th birthday till somewhere in my mid teens.  Actually, she may have upped that to $1.50 there at the end.

I’m struggling to remember my piano teacher’s name.  Usually, while I almost invariably forget what I came downstairs for ten minutes ago, I have tons of details in vivid memory about people, places and events that happened in the 1940s.  But this name – for the moment, at least – escapes me.

I remember all sorts of other details.  I remember the embarrassment I felt when she caught me picking my nose.  “Please don’t,” was all she said.  But she said it with such disdain that it was enough to keep me from ever doing it again unless I made damn sure the coast was clear first.  I also remember her complaining loudly that her nephew, who had come back from the war in the Pacific with a Japanese war bride, actually wanted to bring her to visit.  “Such nerve,” she told me.  “I told him in no uncertain terms I would not have that woman in this house.”

She was always booked up, so I could never get her to play for me.  One time, when I arrived a little early, she was playing the Warsaw Concerto.  It totally blew me away.  I had no idea she could handle that kind of challenge and wondered ever after what her story was, what came before that lonely life, just her and her sister both living out their lives in the small-town New England house they grew up in.  How wretched it must have been having to sit, hour after hour, listening to the kids of the village bang out their Für Elise numbers and demonstrating they had barely touched the keys in the week between lessons.

I remember how hard she tried to get me to practice my Czerny scales, to develop my ability to race up and down the keyboard.  A total flop.  I did well enough, even became a church organist there for a couple years, although that was pure chance, when nobody else would do the job for $15.00 a Sunday and I could sight read pretty well and hit all the chords with moderately good accuracy.  But I never had the discipline to seriously go places.

Music theory I put in the same category as mathematics.  Something to do with puzzles, like crosswords, except less interesting because it didn’t involve real language.  I remember toying with the guitar at one point and realizing if I had done my homework when I was younger I would already know all this augmented fourths and diminished fifths stuff.  But it was not to be.

So when somebody asked me the other day how to tell the difference between a soprano and a mezzo-soprano, and I heard myself say, “The mezzo’s voice is lower,” I felt myself squirm.  All those years up close to music and that’s your answer?!

So I dug into things a bit and had a ball yesterday for a few hours, trying to get away from the talk of the fiscal cliff and other evidence that I spend far too much time as a news junky, filling in some gaps in my musical knowledge.  As a result, I now know that the typical soprano voice ranges from Middle C to High C.  Most people know middle C because it’s in the middle of the piano keyboard.   You can spot the Cs, in case you never studied any music at all, because they are immediately to the left of the two black keys.   On an 88-key keyboard, Middle C is the 4th C from the bottom.   So that’s why it’s often referred to as C4!   Man, what you can learn if you just start paying attention.  At any age.

Bet you didn’t know that Middle C resonates at 261.63 hertz.  A hertz (Hz) is a unit of frequency, specifically the number of cycles per second, which you can see animated, if you like, by clicking here.

A clock ticks at 1 Hz, the human heart beats at 1.2.   When orchestras tune up, they match their instruments against A4 (the A above Middle C), which is 440Hz.

While we’re at it, you might be interested to know that while “pitch notation is intended to describe audible sounds, it can also be used to specify the frequency of non-audible phenomena. For example, when the Chandra X-ray Observatory observed the waves of pressure fronts propagating away from a black hole, the one oscillation every 10 million years was described by NASA as corresponding to the B♭ fifty-seven octaves below middle C (or B♭−53).”

A soprano’s “tessitura” (most comfortable singing range) is, as I said, between C4 and C6.  A typical mezzo-soprano ranges from G3 to B5.  (And, since you asked, a contralto’s range is from A2 to E♭4.)

Sopranos and mezzo-sopranos divide into three types.  There are coloraturas, the ones who do all the pyrotechnics with the high notes and trills and things most of us can’t believe the human voice could possibly produce – check out Edita Gruberova  singing Queen of the Night, from Mozart’s Magic Flute, for instance, which many consider the supreme test for a coloratura.   Or listen to a series of coloraturas here.

Then there are lyric sopranos.  A voice is described as lyrical when it is soft and melodious.  The third type are the dramatic voices, those hearty enough to sing over big orchestras.  If you’re a witch, you’re probably a soprano drammatico.

All of this background technical stuff?   All for the head.  For those moments when the head wants to know stuff.

I do this from time to time out of habit.  Or when, like the other day, I am embarrassed by not knowing stuff, like how to describe the difference between a soprano and a mezzo-soprano.

Most of the time, though, I revert to the pleasure of listening to these glorious voices and marvelling at the personalities behind them ­– Dmitri Hvorostovky is still one of my favorites.  No need to name them all.  Elisabeth Schwarzkopf singing Strauss’s Four Last Songs.  Dietrich Fischer-Dieskau’s Lieder.   Jussi Bjorling, Marian Anderson, Beverly Sills.   Just for starters.   And most of my gay friends still think there’s nobody like Maria Callas (an opinion I don’t share.)

Time to stop with all the names and facts.   I have to admit I was fascinated to learn that somebody had actually measured one oscillation every ten million years and that there are people in the world who actually believe fifty-seven octaves below middle C is a concept.  But I’d rather listen to Edita do Mozart.  Or anything else, for that matter.

Which brings me to how I got onto this shtick in the first place.  A friend sent me a link to a lovely documentary on Edita Gruberova which I want to share with you.     Hope you can find an hour sometime to learn her story.   You won’t be sorry.