The Difference a Song Makes 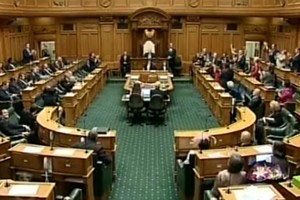 I fell in love with a song yesterday.  Went absolutely ape-shit bonkers over it.  Couldn’t stop listening to it.

The song is the Maori love song, Pokarekare Ana, and it serves as New Zealand’s unofficial national anthem.  Imagine.  A country with a national anthem that is a love song.

I already had a powerful admiration for New Zealand - for its willingness to lead in opposition to nuclear proliferation, for the fact it was the first modern state to have universal suffrage (in 1893), and for being the first country to have its three top positions held by women (Prime Minister, Helen Clark; Governor General, Dame Silvia Cartwright; and Chief Justice, Sian Elias).  But yesterday my admiration went off the charts.  And I can’t be sure whether it was because they became the thirteenth nation to extend the civil right to marry to gays and lesbians, or because when they did so their parliament was ground to a halt by the singing of a love song.   Have a look at the video of the vote count announcement for the full experience.  Make sure you have your hankie at the ready.

If you’re a New Zealander, you’re probably shaking your head at my naïveté, or wondering where I’ve been all these years that I shouldn’t know this melody.  Or at my presumptuousness to think this song might get picked up by gays and lesbians as their theme song, as well.  I was probably overdoing it there, but no matter.  The song went straight to the heart and began to dance there.

It’s not just the melody that got to me, obviously.  It’s a rather plain song, not in the same league as some of the more dramatic show tunes – think Alfie Boe singing “Bring Him Home,” for example, at the 25th Anniversary performance of Les Misérables at Albert Hall.  It’s more in league, maybe, with Amazing Grace in singability and for the way it lends itself to rich harmonies by choirs and large groups of people.  It’s a song, in other words, that spells community.  And solidarity.  And optimism.  Listen to this version, for example by a college men’s group called the Front Row Chorus.

And that’s not to say it doesn’t hold its own when kicked upstairs (or schmaltzed up, depending on your degree of music snobbery)  and sung by soloists who know how to knock you over with their talent.  This operatic duet version with Welsh tenor Bryn Terfel and that New Zealander popular singer with the purest of voices, Soprano Hayley Dee Westenra.  Or, Hayley Westenra doing it solo.  Here, for example, if you'd like it with Japanese subtitles.

Then there are the many versions by New Zealand’s own Kiri Te Kanawa, herself of Maori origin. This Millenium New Zealand performance, for example.   Or this one, where she sings it a capella:

Apparently it has made a huge hit not only in Japan, but in Korea, as well.  Here are a couple versions done by Korean groups, here and here.   If your tear ducts haven't had enough flushing, consider that the reason the song is so big in Korea is that Maori soldiers came to the aid of South Korea during the Korean War and taught it to Korean children.  Or so I'm told.  If you'd like to sing along in Korean, here are the words in romaji (with some liberties taken with the English translation, as you can see).

Don't stop here.  The many versions keep spilling out of YouTube like clowns out of a telephone booth.  Some are exquisite, some merely good, some terribly schlocky - the Xena the Amazon Lady version, for example.  Nice harmony, but the video is strictly you gotta be kidding.

In digging around for more information about New Zealand and about this song, I came up with all sorts of interesting information.  New Zealand has, besides God Save the Queen, I mean, an official national anthem that is also head and shoulders above most national anthems as a beautiful melody.  How do they do it?

And how do they know to treat their Maori minority with such respect?  About half a million of New Zealand’s four million inhabitants are Maori, only just over 160,000 of whom have even conversational ability in the language.  About 70,000 are native speakers today.  But just as Switzerland accepts Romansch as one of its four official languages, New Zealand is not concerned with numbers, but with historical representation and respect.

Not only is their national anthem a thing of beauty, it shouldn’t be missed that it is sung first in Maori, and then in English.

And you haven’t heard it all yet.  Besides considering Pokarekare Ana an unofficial national anthem, they actually have one more official one:  The third language is New Zealand Sign Language.

It occurred to me at some point yesterday while I was going on and on over what had just happened in New Zealand, that I had given Uruguay short shrift.  They, too, had just passed legislation granting same-sex couples the same rights opposite-sex couples have to have their life partnerships recognized officially.  And, for that matter, I didn’t hop up and down when Argentina granted its people those rights, either, despite the fact I have a special affection for Argentina for that wonderful period in my life when I lived there in 2007.

The only way I can explain it, is that there was something about the music.  Watching people cry and shout with delight is one thing.  Watching them burst into song – a love song, at that – is another.

picture credit of the New Zealand Parliament leader making the announcement that the vote was 77 to 44 in favor.

Don't miss, while you're at it, the great speech by Maurice Williamson leading up to the vote.

And that woman in the rainbow-colored coat at the center of it all in the first video of the vote count announcement?  Her name is Louisa Wall, and she's the Labour MP for Manuwera.   She's the major force behind it all.  Kudos!  Kudos too to the woman behind the woman, her partner, Prue Kapua.