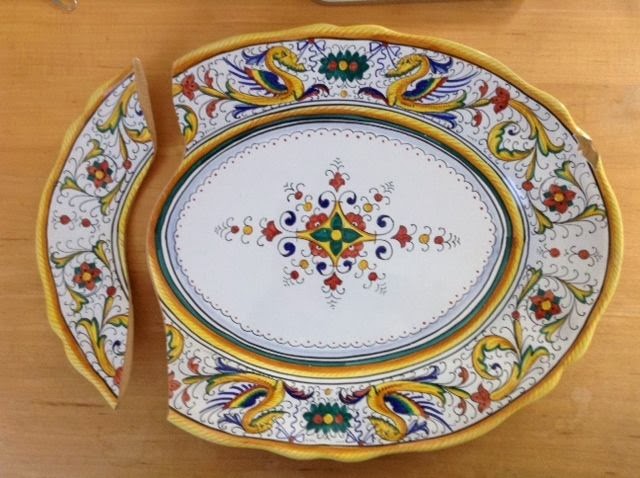 In 1996 I went to Italy with several friends and had one of the more memorable vacations of my lifetime.  Back in the 1960s, when I was in the army, my friend Jerry and I had traveled there.  We had little money and traveled on the cheap.  Jerry looked up one time at the villas in the hills outside Florence and said, “Let’s make a promise.  When we get rich, we’ll come back and stay in one of those villas.”  I agreed.

It seemed that we were.  At least I had a well-paying job and more money than I had ever had in my younger life.  It’s now or never, we decided.

For eighteen years, I have had a memento of that trip.  While in Florence, we came across a shop selling products by Labor Deruta.  I’d seen them around for years, and decided I’d buy one.   I chose a serving platter.   It was an extravagant purchase – cost me several hundred dollars, and the price of shipping it to Japan virtually doubled the cost.

I’ve treasured that plate all these years.  A couple of years ago, it got a chip in it.  That didn’t phase me.  The chip gave it character, and the imperfection made it fit better with my less-than-neat-and-tidy lifestyle.

Yesterday, the platter broke.  Don’t know how.  It doesn’t matter.

I had treated it with special care.  It got lots and lots of use.  I decided it was time to say good-bye to an old friend.  Taku wants to glue it back together, but I understand there’s a risk to putting food on chipped dishes.  I could put it on the wall, of course.  But that strikes me as an unworthy end for such a useful member of the household that gave us such pleasure.  I don’t know what I’m going to do with it, but I’ll find some proper way to dispose of it, I expect.  Maybe break it into tiny pieces and toss it off the pier at the Berkeley Marina, as we do with the ashes of friends.

I hate saying good-bye.  I've never been good at throwing away old shoes or giving old clothing to Goodwill.  This good-bye comes in the same week that I got the news that my first great love just died of a heart attack.   My first experience of going weak-kneed over another human being.  And it's hard to concentrate.   My head is filled with memory tapes running from nearly sixty years ago.  I'm surprised to find they're in such good condition.  I’m mourning the loss of one of my oldest friends.  And I’m mourning the loss of a treasured object that lived in my kitchen.  Time for some meditation on the fragility of life, on how all good things come to an end, and on the importance of making the most of things while they’re with you.  For the importance of counting blessings.  For recognizing how easy it is to see people as things and things as people.  For appreciating the heightened awareness than comes with melancholy.

And for showing some attention to the other chinaware in my kitchen now terrified they are about to be sacrificed along with their leader.

Wish I had never said aloud, “Time to throw all this junk out and buy new.”

Love this, Alan. I feel it, as (some) people say nowadays. A part of us gets all involved when something with memories for us, which we've long cherished, breaks, goes kaput, etc.

Something Steve and I now do with broken pottery: we put it in our garden at various points, arranged in decorative ways, so that it has a new life pointing up leaves, flowers, etc.

P.S. I think we once had that same platter, or a version of it. And am now wondering what became of it. I can remember the little Italian shop in Toronto near where we lived, at which we bought it in the late 1970s.

Thanks, Bill, for this suggestion. I've gotten several e-mail responses to this blog entry, every one of which urged me not to throw the plate away. Some insist it can be made good as new with glue. We're going to see what we can do.

Oh no!!!! I like Bill's suggestion! If you decide to go that route, and don't have space in your garden (well, that's a silly thought), I'd volunteer to "home" it in mine. :-)