Young and Gay in Putin’s Russia 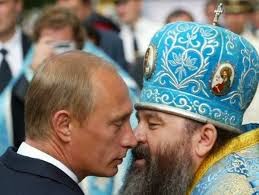 A half-hour documentary by online magazine vice.com has just come out on the struggle the LGBT community in Russia is undergoing just trying to keep their heads above water, to say nothing of achieving some semblance of civil rights and freedom from bullying and other oppression by thugs and by state authorities.

What is happening in Russia is a sadly familiar story.  A man rises to the top and sets about consolidating power for the long term.   Putin is an expert at the game.  He knows how to use the tools of manipulation.  Long oppressed under communist rule, the Orthodox Church, Russia’s nationalistic state religious entity, has worked its way back among the masses.  The collapse of the Soviet empire has also unleashed Russian nationalist sentiment in the public at large, as well.  Put the two together and you have a perfect combination for manipulating Russian hearts and minds.  One should never underestimate the readiness of a people to be manipulated by patriotism and religion.  Only one thing is missing to bring that sentiment to a laser-beam focus and flame insecurities just beneath the surface – a common enemy.  A scapegoat.

Other than an occasional wacko like Russian Orthodox monk Brother Nathanael, who still pushes the Protocols of the Elders of Zion,  the Russian church is not likely to foster anti-Semitism any more.  The Holocaust has inoculated most people these days against that inclination.   Can’t go for the Jews.

Enter the  gays and lesbians.

Were it not for the upcoming Sochi Olympics, the anti-gay campaign recently unleashed in Russia might have gone largely unnoticed internationally.  Unfortunately for Putin’s policy planners, though, homophobia has come to be recognized in the West as a religion-based bigotry, and in one country after another, it is going the way of the other bigotries of racism and sexism.  Gay rights are now recognized in most modern countries as civil rights, and have been supported officially by the High Commissioner for Human Rights at the United Nations since 2011.  Putin doesn’t have the free hand he might have had a decade or two ago. 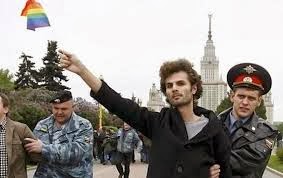 That doesn’t mean he isn’t trying.  Young and Gay in Putin’s Russia captures a vivid picture of what gay activists in Russia are faced with.  Particularly informative are the now familiar prejudices of the homophobes.  Whereas advocates of stoning and the like are now at the fringes of society in the West, in Russia under the new laws crazies now have police protection.  Moreover, often it is the police themselves carrying out beatings and intimidation.  One spokesperson claims that in the West things have gotten so decadent that they are now setting up brothels for sex with animals.

Chief author of the anti-gay legislation criminalizing gay behavior in Russia is Vitaly Milonov, a member of the “United Russia” faction of the Legislative Assembly of St. Petersburg.  He is shown near the end of the documentary in his office under the portrait of the Metropolitan Patriarch Kirill of  the Russian Orthodox Church.  “In Russia the majority of the people follow Christianity,” says Milonov, clearly intending that fact as justification for his political actions.  “And according to all the surveys, 85% or Russians support the law.”

The New York Times reports a different set of figures.  They cite a study in which 45% percent of Russians surveyed thought gay men and lesbians should enjoy the same rights as all other Russians.   A slightly smaller number – 41% – declared they should not. (15% were undecided.)

In an ABC News interview a couple days ago, George Stephanopoulos asked Putin about these laws.  Putin shot back with an aggressive counter-attack, saying, essentially, “Put your own house in order before you criticize us.”  He also attempted to make a distinction between protesting a law, which he insists is legal, and advocating homosexuality, which is not.  What the documentary shows is there is no practical way of making that distinction.  Russian police are breaking their own laws by arresting individual protesters standing alone.  They are supposed to be allowed to make their points without hindrance.  One activist carries a sign that reads “It’s OK to be gay.”  His sign is torn up and he is marched away.  Apparently if he had said simply laws saying it's not OK to be gay should be changed, he would not be breaking the law.  I wouldn't bet on it.

Gay activist and lesbian Masha Gessen expresses concern that under the new laws children could be taken from their families.  The law affects her personally, since she is the mother of a young boy she adopted when he was two years old.   Because of her activism, she knows she could be targeted, and charged with one “administrative infraction” after another.  Once enough charges have accumulated, the state could step in and declare her an unfit mother and take her child away.   They could do this with biological children, just as easily, actually.  In the interim between her interview in the documentary and the Stephanopoulos interview, Masha Gessen has left Russia.

Putin may claim all he likes that Russian citizens are free to express themselves.  When gays and lesbians vote with their feet and emigrate out of fear, his words ring hollow.  It’s actually useful to watch the Putin interview and Young and Gay in Putin’s Russia back to back.   Beating gays up in the street and subjecting them to the “urine cure” could be dismissed as the work of thugs.  But watching the police dealing with protestors makes it clear just how hollow are Putin’s claims and removes any doubt that the international protests against Russia’s anti-gay laws are justified – if you still needed persuading.