Get off my foot 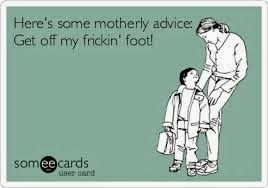 The use of the term “traditional marriage” has always bugged me no end, when used to refer to the practice of one man and one woman marrying each other voluntarily for love.  It’s an egregious example of revisionist self-serving history.   If you’re going to use language that way, there’s no reason not to call pigshit fried chicken.

A quick fact check or a good history of marriage – here,  for example – will reveal how unsound the claim is that people married traditionally for love.  The idea that a man without sexual experience and a woman without sexual experience should find and marry each other and that neither should ever have sexual experience with another person has got to be one of the quaintest notions to come down the pike in a long time.  Definitely an oddity.   One possible route to happiness, I suppose.  But hardly anybody’s idea of a standard practice.

Our standard practice, from an anthropological perspective, is not exclusive monogamy but serial monogamy.  Even the most middle-class of American women who settle down and make a happy family have likely had a “practice husband” or a series of “getting to know each other” boyfriends before doing so.  Contending that sexual exclusivity is the only way to go is pure fantasy on the part of religious dreamers.  Many of us find a richness of sexual experience enriches not only life itself, but improves the chances you will appreciate a life partner all the more, once you find somebody you want to commit your life to.

Society is plagued by religious groups known for making absolute truth claims, including what constitutes a "traditional" marriage.   The Roman Catholic hierarchy, for example, suffer under the illusion they speak for all Catholics.   Some seem to believe they speak for all humankind.  These folks are fond of speaking in declarative language about “is” when they are doing nothing more than ticking off what they think “should be.”  “God wants us to… God will answer your prayers…  God gets angry when….”

That said, one of the curious events of our time is the all-out effort on the part of gays and lesbians to claim the institution of marriage as their own.  Unimaginable a generation ago, same-sex marriage is now the bellwether of the mainstreaming of LGBT people in society.   When it reaches universality – it’s well on its way already – LGBT people will have half a chance of being viewed no longer as pariahs, freaks and weirdos, but as colleagues and neighbors and aren’t they cute when they’re in love.

For this reason, it strikes me as curious – and perhaps the word “bizarre” is more apt – that groups like the Catholics and the Mormons should be working so hard to keep lesbians and gays out of the institution they now claim is theirs to define.  Mormons look particularly silly here, stomping about these days, incensed that somebody should want to define marriage other than the way they see it.  An institution they embraced in its “modern” form barely a century ago.

Polygamy (specifically polygyny, the practice of marrying more than one wife), was instituted by the founder of the Mormon Church, Joseph Smith, Jr., some time in the 1830s.  Even after it was outlawed by the federal government in 1862 by the Morrill Act, Mormons insisted it was their right to practice their religion as they chose to, and the tradition of plural marriages, as they call them, went on until 1890, when church president Wilfred Woodruff issued a Manifesto, eliminating the practice.  He specifically left plural marriages already performed intact, however.  Even then the Mormon tradition continued, even after a Second Manifesto was issued when so many Mormons refused to heed the first one.

Utah was able to become a state, in 1896, only by agreeing that a ban on plural marriages would be written into the state constitution.    It wasn’t the Mormon tradition, but they complied, and a century later, in 1995, Utah, with two-thirds of the population claiming Mormon roots,  would become the first state in the country to enact a DOMA (so-called “Defense of Marriage” Act).  For a group that loves the word “tradition,” they are remarkably capable of turning themselves around to go with the flow.

Nine years later, in November 2004, two-thirds of the population voted for a constitutional amendment banning same-sex marriage.  They were now using the term “traditional marriage” to refer not to polygamy but to the marriage of one man and one woman.  But unlike their Catholic bed partners in the fight against gay rights, they are careful to avoid reference to traditional marriage as “the way God always intended.”  The ones who know their history, at any rate.

Then, three weeks later, the U.S. Supreme Court stepped in and placed a stay on that decision.  Same-sex couples could no longer marry after January 6, 2014.

That raised the question of what would happen to the 1360 couples who had married in that window between December 20th and January 6th.   What happened in Utah was a replay of what happened between the time gays and lesbians started marrying in California and Prop. 8.  Fortunately, this time the federal government was on top of things and Attorney General Holder quickly announced that the federal government would recognize those marriages, regardless of local Utah efforts to have them annulled.

So what happens next?

It’s clear that Utah is no longer the Mormons’ exclusive earthly Zion.  13% of the population is now Latino.  And while the majority of Utah citizens still identify themselves as Mormons to census takers, when church leaders speak, they need to keep in mind they are speaking to a Utah population where the majority are not active Mormons (The 2010 census showed only 42% of the population to be ‘actively Mormon.’)

While a majority of Americans now favor same-sex marriage, and 72% see it as inevitable, Utah’s socially conservative largely Mormon population is particularly opposed to homosexuality.  This enabled Utah governor Gary Herbert to instruct state agencies on January 7  not to recognize the same-sex marriages performed in Utah and insist the status of the couples that are already married is up in the air and in the hands of the U.S. Supreme Court.  Not only that, by putting the new law on hold, according the state authorities, even marriages between same-sex couples conducted elsewhere will not be recognized in Utah.

On the other hand, an op-ed piece in the Salt Lake Tribune yesterday pointed out that the state has simply re-created the conditions that were in place when the U.S. Supreme Court struck down the Defense of Marriage Act.  Specifically, Utah, like California following Prop. 8, now has three classes of citizens: straights, who may marry at will, gays who are married, and gays who may not marry.  And to cancel the 1360 marriages that were legal in Utah at the time they took place would beg the question, if this was ultimately found unconstitutional in the California case, why should it not be also found unconstitutional in Utah?  No heterosexual people would gain, and only gay people would lose.

What is it that drives such animus? one has to wonder.   What makes a live-and-let-live policy impossible?  Why can't they marry each other at will and leave the rest of us to do likewise, those of us not of their religious persuasion?

It’s bad enough the Mormon Church should be one of the prime movers behind efforts to withhold rights from LGBT Americans – and remove them when they are recognized.  Now they have to twist the knife by a stunningly arrogant suggestion that seekers of those rights should be scolded for their lack of civility.

On Friday (two days ago) The First Presidency and the Quorum of the Twelve Apostles  sent out instructions on how to respond to the latest action by the Supreme Court.

…(W)e encourage all to bear in mind our Heavenly Father's purposes in creating the earth and providing for our mortal birth and experience here as His children,

the statement starts out.

...Marriage between a man and a woman was instituted by God and is central to His plan for His children and for the well-being of society.

Absent, you’ll notice, is any reference to God’s decision to do this in the 1880s, when God apparently had a change of heart from his earlier idea of what marriage should look like.

…Changes in the civil law do not, indeed cannot, change the moral law that God has established. God expects us to uphold and keep His commandments regardless of divergent opinions or trends in society.

The Presidency and the Quorum at least recognize there is a lack of congruence between civil law and what they consider to be God’s law.  That’s hardly news.

The question is what are we to make of this difference of opinion.

…Just as those who promote same-sex marriage are entitled to civility, the same is true for those who oppose it. The Church insists on its leaders' and members' constitutionally protected right to express and advocate religious convictions on marriage, family, and morality free from retaliation or retribution," the LDS Church says.

Notice the declaration of the obvious here.  “Constitutionally protected right to express and advocate religious convictions…free from retaliation or retribution.”

Who would argue with that?

And here’s the rub.  What is left out of this declaration is any indication of where the line is between speech and action.  Absent is any recognition of the Mormon Church’s political role in turning back the rights of California Citizens in Prop. 8.  Millions of dollars.  Millions of hours of church-led efforts to snatch marriage licenses out of the hands of fellow citizens with little or no interest in the Mormon view of God’s law.

… Church officers will not employ their ecclesiastical authority to perform marriages between two people of the same sex, and the Church does not permit its meetinghouses or other properties to be used for ceremonies, receptions, or other activities associated with same-sex marriages.

Not a problem.  Your meetinghouse belongs to you.  Use it in good health, any way you like.  If you want to keep Lutherans or Jews or black people or people with unruly mustaches from making use of the facilities, be my guest.

We have common ground here.  Civility, yes.  By all means, let’s withhold violence and threats of violence.

But don’t be naïve.

When you’re standing on my foot, and I shout, “Get off my foot, motherfucker,” you’ll have to understand that scolding me for being a potty mouth might not be the best way for you to reach across the gap.