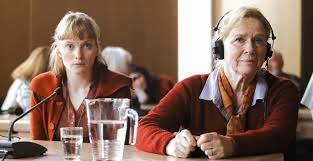 I attended the opening night last night of this year’s Berlin and Beyond film festival, sponsored by the Goethe Institute of San Francisco and by Lufthansa.  The film chosen for the opening was Georg Maas’s Zwei Leben (Two Lives).

The film is not light entertainment.  It is exceedingly dark, right down to the shooting technique of placing characters in a claustrophobic setting and lighting little more than their faces, leaving most of the screen pitch black.  If you have the patience, however, the film will reward you in the end.

There is a good review of the film by Boyd van Hoeij available on The Hollywood Reporter, giving film details and explaining what the viewer is up against going in.  Because filmmaker Maas chose to make the kind of film that doesn’t insult an audience with too much explanation and simplification, and doesn’t tell a story chronologically, the audience has to work hard to figure out what’s going on.  That approach probably appeals to the sort of people who enjoy doing jigsaw puzzles.  For many, though, it’s a stretch.

There are other layers of difficulty.  The film addresses a historical wrong it clearly wants to put right.  That will lose the folks who will feel they are watching a message movie.   It’s a fictional account of a child born to a Norwegian woman and her lover, a German soldier of the occupation in 1941.   It was originally based on a considerably reworked unpublished book by Hannelore Hippe.  Full comprehension of the plot depends on a knowledge of the Cold War and the conflict between two divided and antagonistic Germanys, and events that took place at a time when twenty-five-year olds today were not yet even born.   Given the surprising number even of young Germans who cannot tell you who was on the two sides during the Second World War, and the fact that half of American high school kids cannot identify the Holocaust, this, I expect, will severely limit accessibility.

How many Americans under thirty know, for example, that Germany was divided into four zones and occupied by the British, Americans, French and Russians, that the zones of the first three became the West German Federal Republic and the Russian zone became the German Democratic Republic (GDR – or DDR, in German.)  And that the west experienced an “economic miracle” early on, while the communist GDR became a police state with a “security service” known as the Stasi, which kept particularly close track of the comings and goings of its own citizens and brooked no dissent.

We know a lot these days about the NSA and their spying activities in the Warsaw Pact nations, including the GDR, but we know much less about how the West was infiltrated by GDR agents working abroad. 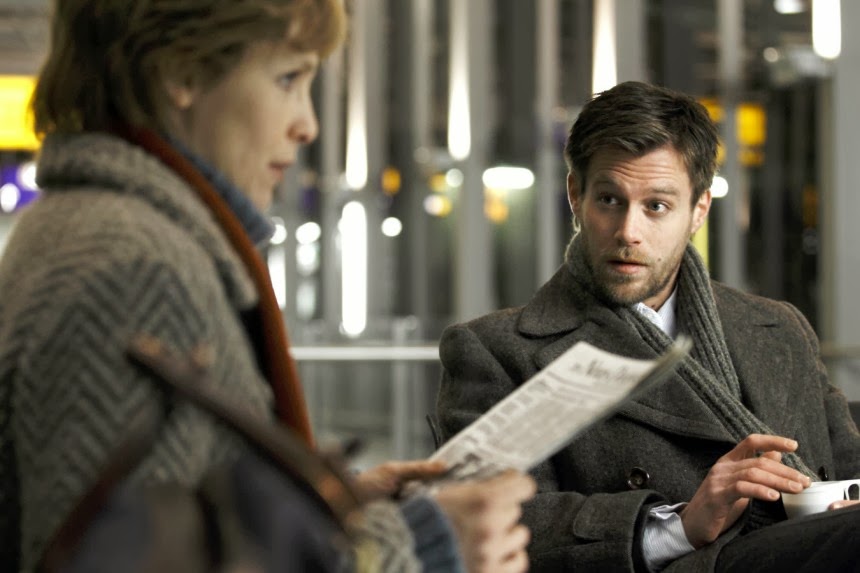 Zwei Leben is the story of a woman taken as a child from an orphanage and groomed to make her way to Norway to spy for the Stasi.  They were aided in this program by the fact that German soldiers had occupied Norway during World War II and left behind some 11,000 children from relationships with Norwegian women.  And because Hitler saw these children as useful in building the future of the Reich, he had them taken from their mothers and sent to Germany to be raised.  The birth rate in Germany wasn’t sufficient to his plans and these children, born to Aryan mothers, helped fill the gap.

An organization known as Lebensborn was set up outside of Munich in 1936, and in 1941 the first branch was set up in Norway.  Unmarried mothers, shunned by their family and neighbors for being collaborators, could find shelter and pre-natal care and give birth without social stigma.  The mothers were commonly “persuaded” to give up their children for adoption.  In the absence of any alternatives, most did.    There were nine such facilities in Norway (as well as two in Denmark, seven in Poland, and one each in France, Belgium, Holland, and Luxembourg.)

Once you get past this exceedingly challenging wall of historical detail, the film opens into a powerful drama of a family dealing, forty-five years after war’s end (the film takes place in 1990), with having its wounds reopened, as it becomes the story of a girl who made her way across the Baltic first to Denmark and finally to Norway in search of her mother.  The mother, Åse Evensen, now a great-grandmother, is played by Liv Ullmann.  Watching her face throughout is one of the reasons one goes to the cinema.

She is not the main character, though.  That role is the character of her daughter, Kristine, who we eventually discover has been working as a Stasi agent, played by Juliane Köhler (Aimée & Jaguar, Nowhere in Africa – she also played the role of Eva Braun in Downfall).   Also in this superb cast are the German action film hero Ken Duken (Max Manus, Inglorious Basterds) and Rainer Bock (White Ribbon, War Horse, Inglorious Basterds) and Norwegian actress Julia Bache-Wiig (A Somewhat Gentle Man, Max Manus), and one of Norway’s top-ranked actors, Sven Nordin (Elling).

We have to choose between condemning Kristine for her deception and sympathizing with her for her growing sense of moral responsibility for it.

The clear villain of the story is the GDR.  They are no more, and cannot defend themselves, and no doubt that’s just the way everybody involved wants it.  What’s to defend of a country who might have exposed the Nazi crimes in its past, but manipulated them to its advantage, instead?

After taking perhaps three-fourths of the movie or more to set this all up, when the full complexity and the moral challenge of the daughter’s character are brought to the surface, the last half hour becomes a thriller.  I won’t spoil the ending, except to say you are brought back in a big way to the cause on which the plot is based.  So much of war’s injustice involves the shame of victims for just being victims.  Like the “comfort women” of Asia, to use the word preferred by the brutalizers (because it is also the word used by the media), pressed into prostitution by the occupying Japanese army, the “love children” of soldiers and women in countries they occupy, as well as the women themselves, are still climbing out of the shame.  With Nazi war criminals in their 90s, we feel a statute of limitations is nothing more than a further injustice, so we keep after these criminals till their dying day.

The women (also now in their 80s and 90s) and children of occupied nations torn from each other and forced to live a lifetime of shame are no less worthy of our dogged efforts to put right a wartime wrong.  Such, at least, is the message of Zwei Leben.

The film was highly acclaimed in Germany, where it opened last September.  It has been nominated as Germany’s candidate for Best Foreign Film at the upcoming Oscars.   According to Maas, who was present at last night’s showing, it was less well received in Norway.  When asked why this is, the filmmaker could only speculate.  One Norwegian complained that he portrayed them as more vulnerable to espionage than they actually were.  That may have something to do with it.  And it would come as no surprise if the shame of so many Norwegian women still lingers.  Audiences were sparse, compared to audiences in Germany.  Which leads me to speculate that the shame associated with being part of an invader nation doesn’t rise to the level of shame associated with being part of a nation that is invaded.

When the movie comes to a close you are hard put to identify its genre.  It is a psychological drama, and a thriller.  It’s part action film, part didactic historical documentary, part courtroom drama.  And in the end, it’s a human drama about the yearning for family, love and security at all costs.  One that leaves you wondering whether it’s a cost you yourself would be willing to bear.