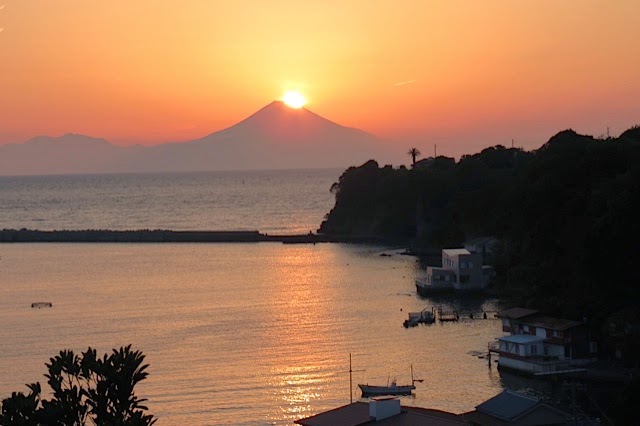 My mind has been reliving memories of Japan lately.  I don't know why.  That wonderful photo of Mt. Fuji from a friend's balcony (to the left) set it off, I think.  And friend Bill's response.  Bill spent some time there visiting me and never once got a glimpse of Mt. Fuji.  He's persuaded that Fuji is all a scam to attract tourists.  Once they get there, he says, they realize it was all a phony come-on.

Fortunately, even without Mt. Fuji, Japan is a land of endless delights.   Some are joys to behold – the gardens, the flower arrangements, the kimonos.   And some surprise and tickle the imagination - macho gangster-types walking around in pink slippers, hot café au lait in vending machines.

One of the things about Japan that Westerners often comment on is the number of ways that differences between men and women still show up, whether in the men-only practice of teeth-sucking or the women-only practice of hiding behind the hand when laughing.   “Femininity” has traditionally been associated with delicacy, modesty and refinement, and coarseness and aggressivity with males.  It's grossly unfair, of course, to compare what most would consider the positive aspects of one group with the negative aspects of another, but behind these stereotypes there can be some truth.

Consider the otohime machines in a women’s public toilet, for example.  Paruresis, you see.  My new word for the day.  Just to get an idea of the spread of the concept, I typed paruresis into Google translate to see what it might be in other languages.  A Chinese translation popped up immediately.  It’s 害羞膀胱, pronounced haishu panguang, and it translates shy bladder.  It’s the phobia some people have of being unable to urinate when somebody is close enough to see or hear what they are up to.

Otohime, 音姫, to return to the Japanese context, translates sound princess. It's a machine that makes the sound of flushing water.  So common was the delicate fear of Japanese ladies of being overheard making tinkle noises that they used to flush the toilet constantly while taking a whiz,

resulting in a massive waste of water.  Lost in translation is the fact that there was an actual princess with that name (different characters, of course).  Note, in the picture at the right, that there is a volume control to match the strength of your desire to mask the sounds of nature.

Since a public campaign to get women to stop this waste of water failed miserably, Toto Toilets came to the rescue with the sound princess, originally a battery-operated device attached to the wall, and, more recently, as the picture above illustrates,  a feature of the bathroom plumbing system in modern houses.   Before you begin your business, you wave your hand in front of the sensor (or push the button) and voilà, your own personal Niagara.

Unfortunately, I’ve been told, many women fear people can distinguish the sound it makes from the flushing of a real toilet and thus they would be revealing their desire to avoid embarrassment by making use of the device, so they don’t use the machine, and keep flushing the actual toilet instead.  At least some women use it, however, and it is estimated twenty or so litres of water are saved by this modern technical advance.

What prompted this reverie on bathroom practices was an article I just came across about another Japanese female sensitivity – being caught opening your mouth too wide.  Having an “ochobo-guchi,” (“puckered lips” – i.e., “small” -mouth) in Japanese – is much to be desired.  Or so they tell me.  Personally I have a preference for women unafraid to guffaw. 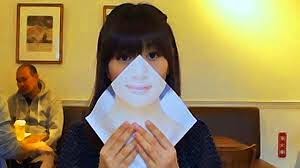 In any case, apparently this hamburger chain called “Freshness Burger” found that their equivalent of the “big mac” wasn’t selling very well.  The problem was women on a date didn’t want to be caught opening their mouths enough to have at it.   The Japanese version of "ladies don't eat grinders."  The solution?  A new kind of napkin, or "wrapper" to hide the mouth when eating.


I've often quoted my friend Luis’s description of Japan as the land where “the world’s best microsystems are invented to deal with some of the world’s worst macrosystems.”   Here’s another example.  The PR campaign to save water didn't work.  Why should a PR campaign to become unafraid to get your lips around a fast-food behemoth?  Never underestimate the world of commerce's ability to accommodate reality.

A picture is worth a thousand words, so have a look at this link to the YouTube illustration of what I’m talking about.

Whether you’re a “vive la différence conservative or whether this story makes you groan at the slow pace of gender equality, I trust you’ll appreciate Japan’s never-ending supply of creative ideas.

And lest you think we're the only place on the planet that can twist language into a knot to serve political or commercial purposes - and in this case both at the same time - consider the name the company is using to market these masks to keep women "modest."  They're called "liberation wrappers."  Women are being "liberated" from "ochobo" syndrome, you see.

Labels: My Life in Japan, Self-indulgences