Vincent wants to sea - A Review

Vincent will Meer (English title: Vincent wants to sea) is a German road film made in 2010. Vincent is played by Florian David Fitz, who also wrote the script.

Shunted off to an institution by his politician father just before an election, Vincent finds himself thrown together with Marie, who suffers from anorexia and Alexander, who has a severe form of obsessive compulsive disorder.  Vincent himself suffers from Tourette’s Syndrome, a disease that makes him react with any number of motor tics, and a psychological tic that leads him to shout obscenities.

The three are all under the care of a Dr. Rose, whom they all share a desire to escape from. Marie finds her chance and steals her car keys.  This then enables Marie to pay Vincent back for his kindness to her and help him take his mother's ashes to Italy to be scattered.  Vincent, Marie and Alex, each suffering from their own severe social handicaps, race through the Alps to the sea, gradually learning that they can survive only by taking care of each other. The magnificent scenery works like a character in the film, providing a backdrop of beauty as if to suggest things will be all right in the end.

To round out the story, Dr. Rose and Vincent’s father chase down the road after them, all the way to the Adriatic, trying to avoid scandal and to bring them safely home.   Without giving away the ending, the conflicts are resolved in not entirely unexpected ways.

The movie has its flaws.  Like all road trip movies, cliches are always just around the corner. They need gas and realize they don’t have any money.  The humor is slapstick at times.  The plot lines stretch credibility in places.  The idea that a politician wrapped up in a political campaign can suddenly take off on a road trip of his own, and a doctor working in a clinic and responsible for other patients can do likewise, for example.   In the real world, what are the chances they could have kept the police out of it, one wonders.   And probably the most annoying thing about the film is the title.  The German title,  “Vincent will Meer (Vincent wants sea)” is a clumsy attempt to pun on “Vincent will mehr (Vincent wants more).” Translating the failed pun into something no English-speaking person would say simply compounds the nonsense. 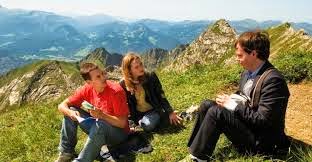 Then there is the attempt to make the characters complex, which doesn’t always work.  It just makes them unsympathetic. Watching Vincent beat a bullying kid bloody, for example.  And watching Alex drive off at one point car and leave the others stranded made his already difficult character even more dislikable.

But these negatives are offset by sympathy for the characters as they reveal their vulnerabilities.  Marie and Vincent sneak away to have sex in the woods at one point, but Marie lacks the energy or the will to carry through.

What is very well done are the background stories.  We are shown, and not merely told, where Vincent's motivation comes from to get to the sea to bury his mother's ashes.  We understand how the mother came to withdraw from her husband and from life because of the overpowering challenge to care for a child with Tourette's Syndrome.  And this explains Vincent's intense devotion to her and outlines his desperation.  Other motivations are equally well-explained.   How Vincent's acts of kindness to Marie should make her want to do him a favor, for example, and help him attain his goal and how his love of Alex’s music opens the door to their eventual friendship.  Gathered together, these details are nice touches and give the plot a smooth run.

Vincent must sea is not what I’d call a must-see, necessarily, but it has its moments.   I can’t quite understand where all the awards came from.  It strikes me as a B-grade film, at best.  But it apparently did draw a million viewers to German movie theaters.

It has also inspired an English-language re-make.  The Road Within, written and directed by Gren Wells and starring Robert Sheehan, Zoe Kravitz and Dev Patel, is scheduled for release on June 18th of this year.