Glenn Greenwald at the Nourse

Went to hear Glenn Greenwald the other day at the Nourse Auditorium.  Sold out crowd. Cheering.  Standing ovations.  The guy is overwhelmingly popular in this corner of the nation. Reminds me of the Vietnam War days when we would march down Market Street and end up at a rally at Kezar Stadium with speakers like Jane Fonda and Donald Sutherland and wonder how there could possibly be anybody out there not opposed to the war. 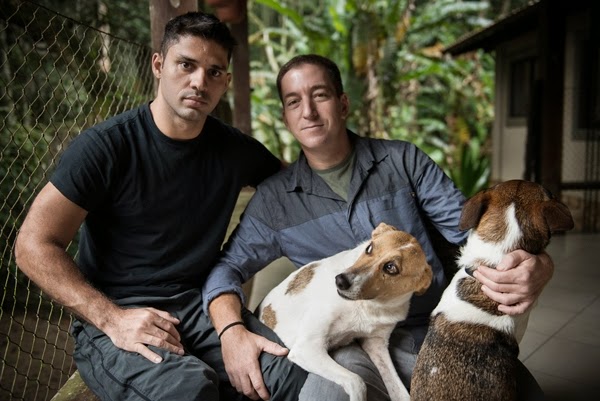 And yet the war went on and on.


The issues of America at war and support of Edward Snowden separate in the same way those who question authority from those who go along to get along, and it would be easy to dismiss this enthusiasm for a cause on those grounds and label the cheering 1500 people in the audience lock-step ideologues.  But what Greenwald had to say is powerfully logical.  He's a brilliant speaker and articulate as they come.  And you can pull that off only when you think clearly.  I don't know when I've been as impressed by anybody.


The arguments are still there that the government has to snoop in order to work with international terrorists and with crime-fighting agencies.  But if you are inclined to support such efforts blindly, have a close look at Greenwald's arguments.  I bought his book when it first came out - No Place to Hide.  It's filled with technical detail, which is a bit heavy going at times, but necessary, I think.  Listening to him in person it all goes down a lot more smoothly.  If you can catch him on his tour, don't miss the opportunity.


Alyssa Figueroa of AlterNet has a good review of his talk.

His point came home for me when he mentioned the names of MSNBC anchor Lawrence O’Donnell, Washington Post columnist Ruth Marcus and Hendrik Hertzberg of The New Yorker, three people whose views I share pretty much all of the time. These people he includes among those who argue if you have nothing to hide there is no reason to object to wholesale NSA data collecting. Greenwald points out the obvious - you don't test a democracy by allowing free speech - or, in this case, privacy - for people who keep their nose clean. You test it by allowing it for outliers. To live in a country where conformity to groupthink is the norm is to live in a seriously impoverished democracy.

Which, of course, is where we live.  The question is whether there is something we can do to fix it.

The photo above, of Greenwald with his partner, David Miranda, and two of their ten dogs, is from another good article on Greenwald, in Rolling Stone, and is credited (although his name is misspelled) to the famous British photographer Max Vadukul.  I did not get permission to use this photo and hope that by crediting it in this way I can get away with calling attention to it.  I will, of course, take it down immediately if there is any objection.

I may lose credibility by showing my prejudices here - for dogs, and for handsome Brazilians. But think about it.  Doesn't that obvious evidence of good taste on Greenwald's part only enhance his believability?  You be the judge.


Added 2:43 p.m., same day - A friend pointed out that he would appear to be getting standing ovations wherever he goes.  Here's a good review of his talk at Carnegie's Zanker Hall in New York.  The question remains how much he is preaching to the choir.

Labels: The American Empire at War