The church chooses its words carefully 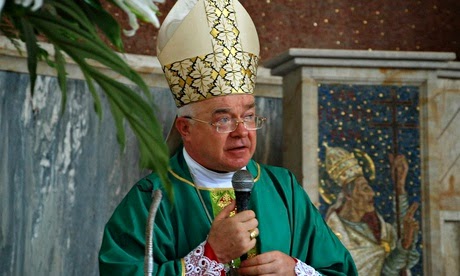 I know this probably makes me a cad, but I’m simply following W. C. Fields' advice never to give a sucker an even break. I’m going to pick a few nits here.  I don’t think they’re nits; you may. But stick with me and maybe you won't.

After all these years of circling the Vatican wagons and covering-up the many cases of sexual abuse of children by clerics, at long last – and seriously, folks, it’s been decades! – the official Roman Catholic church is actually taking steps to disassociate themselves from these sickos.  Instead of shuffling child abusers from parish to parish, they're actually tossing one out of the priesthood.

Trouble is, in doing so, they can’t resist an opportunity to hide behind words.  There’s a perfectly good word in English for removing a priest from his priestliness.  It’s called “defrocking,” and that's the word Guardian reporter Lizzie Davis uses in reporting the story.  Church sources, however, are going with “laicization.”  What do you suppose that’s all about?  Is it so that it doesn’t sound so bad?  Defrocking sounds pretty harsh.  But shouldn’t it be?

Laicization, first of all, is a foreign word in English.  Most English speakers haven’t a clue what it means.  Those who do, think of the French word, laïcité.  There is an English equivalent in “laicism” but it isn’t in common use.  It’s the French way of speaking of the separation of church and state.  Historically, it was a way of getting the church out of the public sphere.  (Like not colluding with retrograde politicians to restrict civil rights, for example, and yes, the U.S. might take note.)

A “lay” person is a person who is not a cleric.  The collective noun is “laity” and it is understood to be the opposite of “clergy.”  And that’s the sense in which the word “laicization” is being used in this defrocking case.   A priest is returning to the state of being a lay person, which he was before he was ordained.  All very innocent and gentle sounding.  And a hell of a clever way to water down an awkward reality.

While the Guardian article used the good Anglo-Saxon defrocking instead of the French laicization, it twisted words in another direction, in my view, when they referred to Wesołowski’s activities as sex abuse.  Child abuse suggests intimidating a kid in the confessional, using parental devotion to the church to persuade them to allow their kid to go camping with Father John and sleep in the same tent and then telling the kid his parents will go to hell if he speaks of what goes on in the tent.   What Father Józef is guilty of is paying a child prostitute for services.  Speak of child abuse and the focus is on the sick puppy individual within the institution.  Speak of prostitution and the focus is on the institution and a means of channeling sexual satisfaction.

The distinction is important.  In the first instance, the harm done to the kid’s psyche can cause life-long trauma.  In the second, the kid gets lunch and maybe feeds his family.  Secondly, it frames two issues that shout to the rooftops what is wrong with Roman Catholicism.  It is erotophobic.  It takes something beautiful – sex – and makes it dirty.  And the “doctrine” (talk about abusing words) of celibacy is just another phase of a seriously disturbed sexuality the church pushes on its adherents.  If the priest were free to enjoy his fleshly appetites as he enjoys the good cigar, glass of wine, or plate of oysters, with another adult human being choosing to do the same, there would be no problem at all.  It wouldn’t affect his devotion to Jesus, Mary and Mother Church one iota.  It wouldn’t make him less compassionate, less generous, less kind.  It would make him a happy man, a living illustration of how one can be catholic and embrace life.   Instead, by making sex dirty, something for the confessional, it drives people like Father Józef to secret hidden illicit pleasures.

The second issue this story highlights is the vulgar display of silks and satins and jewels still worn by the clergy in Józef Wesołowski’s position.  In a country like the Dominican Republic, where poverty is rife and many young people sell their bodies for basic needs, the vulgarity of the display is all the more evident and all the more loathsome.  For clergy to take advantage of kids living in poverty for their own sexual satisfaction reveals a great deal about the personal morality of the man.  And his church, which has for centuries accepted the right of “princes” of the church to live like princes among paupers.  If the church put its money where the current pope’s mouth now fortunately seems to be, it would stop this display of wealth immediately and turn the efforts of the church toward caring for the poor, like this guy the church is supposedly a follower of advocated.

Józef Wesołowski is only one priest among dozens who likes sex and finds satisfaction in young bodies.  He’s not a monster.  In my view, johns of teenage prostitutes are hardly heroic figures, but not living up to the highest of standards is not the same as acting out a moral depravity.  The focus really ought to be not on him but on the seriously hypocritical and dysfunctional institution he personifies.

The whole business makes you want to keep the curia after school and wave your finger at them. Get your priorities straight for once, I want to tell them.  And cut the crap with “laicization”.  Laicization, the way you use it, simply means turning somebody into somebody like me – a lay person.  Józef Wesołowski isn’t being “sentenced” to “laicization.”  Being a lay person isn't a criminal punishment.   He’s being defrocked.

Like the whole damn bunch of you ought to be.