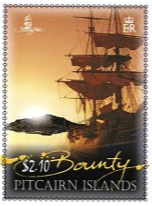 Following a landmark decision reached last month and announced only today, gay and lesbian subjects of Pitcairn Island will henceforth be permitted to marry their partners.  Governor Kevin Lynch declared this ruling showed how Pitcairn "was adapting to the modern world."

A different conclusion was reached by Archbishop Bletherington “Blighty” Bligh of the Roman Catholic archdiocese of Pitcairn and descendant of the protectorate's founder, Captain William Bligh, left there by Marlon Brando in 1790.  Archbishop Bligh took no time to proclaim that the souls of the fifty mostly Anglo-Tahitian inhabitants of the British protectorate were now in serious danger, as the nation "begins its course toward the destruction of the family."  There is some contention over the truth of the claim, since none of the fifty inhabitants appear to be gay.  One is suspected of lesbianism, but she has lived alone for forty years.  “All that could change at the drop of a hat,” said Archbishop Blighty. His entire flock consists of himself and two aging priests, converts from the prevailing Seventh Day Adventist majority, so we know the potential for homosexuality exists.  “And should they both decide to renounce their vows at the same time, there is no telling what depravity may follow.”

Fortunately, the religious leader observed, there is no airport and the island is accessible only by sea, so should New Zealanders or Chileans, Pitcairn’s two closest neighbors, seek to invade the homeland in order to take advantage of the new ruling, they can easily be pushed back out to sea.

When reminded that New Zealand already has gay marriage and Chile will recognize civil unions come October, the archbishop hinted there was a moral in that story somewhere.

The island has come a long way since 2004, when half the adult male population was convicted of rape, indecent assault, and gross indecency. Steve Christian, mayor of Pitcairn at the time, was sentenced to three years of imprisonment for five rapes and his son, Randy, went to jail for six years for four rapes and five indecent assaults.  The postmaster, Dennis Christian, the island magistrate, was acquitted of charges.