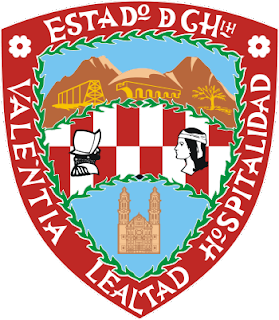 What’s wrong with that?

A whole lot better than cowardice, treachery and get the hell out of here.

I have to admit I’ve never seen a coat of arms before where the name of the place is abbreviated.  And so abbreviated that a stranger looking at it would never guess in a million years what it is supposed to say.

But that’s Chihuahua, where my little girls are said to come from originally – the part of them that is not Jack Russell terrier, that is.  So you’ll understand if I am predisposed to think generously when it comes to the place’s quirks.  Like breeding dogs with apple-shaped heads and wide spaces between their gorgeous bulging eyeballs.  Which are called Chihuahuas in English only.  In Spanish, they are chihuahueños.

I decided years ago I never wanted to live too far from the ocean.  And when there’s no ocean within reach mountains are nice, although they can be claustrophobic.  But much as I recognize the charms of the cactus plant, the idea of living in a city known as the “Queen of the Desert” does not tickle my fancy much.  OK, not at all.  So living in Chihuahua city is out.  Juárez, is out.  Too much crime.  Cuauhtémoc has a nice snap to it.  Delicias – how could one not want to live in a place called delicious?  (“Delights,” actually.)  Guess if my girls ever got the urge to explore their ethnic origins, I might spend a little time there.  But I’d want to come back home.

In Náhuatl, “Chihuahua” means “dry sandy place” evidently.  Home to Pancho Villa.  The state of Chihuahua is bigger than Great Britain.  It’s the biggest state in Mexico.  Before the discovery of geothermal power, the lights used to go out all the time in Chihuahua.

Did you know the Chihuahuha evolved from the Techichi?  A “small, mute dog" that kept the Toltec people happy as early as the 9th Century.

And what’s with all these funny names?  I’ve spent time in Mexico, so I’m aware the indigenous people liked to put t and l together.  Lots of -huatls.    Mazatlán.  Popocatépetl.

But what’s with all these alliteratives?  These repetitions like wawa in Chihuahua.  Or popo in Popocatépetl.  The Tarahumara Indians.  And the pièce de résistance, Puerto Topolobampo, in Sinaloa, where the Kansas City Mexico Orient Railroad was supposed to end up after passing through Chihuahua.  Never got built because Pancho Villa stirred up too much trouble against the rich hacienda owners.  But that’s history for another time.

Today, it’s time to celebrate the fact that Chihuahua State joins its neighboring Coahuila State to the East in allowing same-sex marriage.

Just thought you ought to know.