Let’s hear it for the Bundesrat 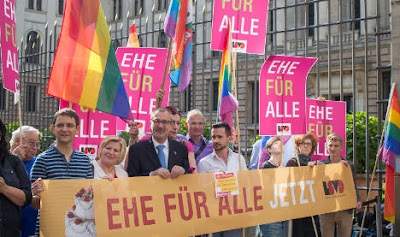 The German word for marriage is Ehe.  Two syllables.  Drops right off the tongue.  Can be said without even a serious intake of breath.  Pronounced “ay-eh” – “a” (as in a-b-c) plus “eh,” the vowel sound in “pet.”  The h is silent.

Then there is “Eingetragene Lebenspartnershaft” – ten syllables to the two of “Ehe” – the word for “registered partnership,” the German legal way of forming what we call civil unions or domestic partnerships.

Two different words.  One smooth and mellow.  The other drawn out, as clumsy as it sounds.

It wasn’t that long ago I was having heated debates with friends about the once wild-ass notion of legal recognition and support for gay partnerships.  I came early on to the conviction gays should be allowed to marry.  Many gay activists I know, including some in leadership roles who led the good fight for gay liberation for years, were worried we were moving too fast with marriage demands.  Better take this one step at a time, or we’ll blow it, they insisted.

What I would have given to be able to fast forward at the time of those debates to Ireland in 2015.  Ireland, and the evidence that the time, at long last, had come.

I’ve been following the impact of the Irish referendum in places like Australia and Italy, and the hold-out states of the U.S.  And, perhaps especially in Germany, a socially progressive country still holding back while its neighbors in Holland and Belgium and Scandinavia and Britain – and now Ireland – bring their populations into the modern era of full rights for LGBT people.  Today, the Bundesrat, Germany’s Senate, or Upper House, voted in favor of a resolution calling for full marriage and adoption rights for same-sex couples.

That’s only half the story, alas.  Germany parallels the United States in the way their lower house is controlled by religious conservative hold-outs.

If you don’t have a dog in this race, the debate can be fun to watch.  If you have had to carry the burden of religious authorities’ claims you are “inherently disordered,” it’s more challenging not to pop your cork.  But Jews have to watch Nazis parade through their towns.  I suppose gay people can be forced a while longer to listen to people who say, “I thought people like that killed themselves!”  Still, today, in 2015.

It’s hard to be patient.  Hard to have to listen to the claims that your desire for dignity will open the door to incest and polygamy and people demanding to marry their dogs.  To the messed up logic that it’s about protecting children, or that the only reason for sex and marriage is procreation.

You wait.  And you pay attention.  And you celebrate the forward movement, one inch at a time. Change is coming.

OK, so the Bundestag, the German Lower House, is not ready to follow the Bundesrat just yet.

Or the next day.

Or the one after that.