The swastika comes to mind 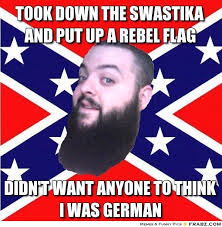 There’s a scene in Judgment at Nuremberg that I think really showed off the acting talent of Marlene Dietrich.   She plays the widow of one of Hitler’s generals who was executed in an earlier trial.  She is trying to convince Judge Dan Haywood (Spencer Tracy) that “not all Germans are monsters.”

What makes this a powerful scene is the dignity Madam Berthold, the Dietrich character, shows in the face of overwhelming evidence that her husband sacrificed his life to a barbaric cause,  Hitler’s megalomaniacal desire to wipe out the Jewish people and capture Germany’s neighboring countries in what he claimed was a master race’s right to control.  She fails to convince the judge.  For her to win he would have to buy into her world view that the power structure of Germany went into the Second World War out of loyalty not to Hitler but to the German nation, that the cause of defending the honor of the nation took precedence over the will of a demagogue of no character, and ultimately no historical consequence.

It’s an interesting intellectual argument she makes, that nations are greater than the individuals who comprise them and that honor and duty to the nation and the oath of office one takes as a military officer might take precedence over one’s individual moral code.

The plain-talking country lawyer who had been pressed into service as Chief Judge to conduct the Nuremberg trial would have no part of this line of reasoning.  His values are those that evolved in the U.S. Constitution, the ones established by the Enlightenment and expressed in the Universal Declaration of Human Rights.  No nation, no principle, no cause stands higher than the rights of individual men and women.

Since the warped young white supremacist who took out a gun and killed nine people in a historic black church in Charleston, South Carolina last week was revealed to have been driven by the racist ideology of the Confederacy, the country is doing some serious rethinking on the decision to allow the Dixie Flag to fly over the State House in South Carolina.

I have to admit I’ve never understood how white supremacists were able to pull that one off.  How they were able to persuade the rest of us, African-Americans especially, but I think anybody of any race with a conscience and a memory, that it was acceptable to continue to wave the slave-owners’ flag right up into modern times.  On official buildings yet.

I know.  It’s not just the slave-owners’ flag, white Southerners will tell you.  It’s the battle flag of all those who fought and died with the best of intentions, to protect their home from a foreign invader.  Never mind that the reason the “foreigners” were invading was to keep the nation intact and ultimately to rid the south of slavery, on which its entire economy was based.

Germany is Beethoven and Brahms, beer and sausages, castles on the Rhein, lederhosen, dirndl dresses, machine-making skills and a whole lot more.  Somebody kept those things alive during the dark days of the Third Reich.  And the same applies to Faulkner and hospitality and fried chicken.  There is no reason not to celebrate what the South has to offer the world, lofty or profane.  Losing the Civil War didn't change that.

I have uncles and friends who wore the uniforms of the Third Reich.  An uncle I never met went missing in North Africa while fighting under Erwin Rommel, said to be Hitler’s favorite general.
I don’t know if he was a monster, but I seriously doubt it.  He was a kid, and I would certainly support those who find his death tragic and worth honoring.  Another very good friend who was in the German navy spent his senior years caring for the cemeteries of the German war dead.  I had no difficulty with that.  These were soldiers of the Reich, but they too were victims of the war and a cause most of them lacked the wherewithal to disagree with or resist.

But you don’t paint a swastika on their graves.

If you can put ideology aside, you can see the fall of the Third Reich as a victory for the German nation.  The criminal Hitler regime had to be defeated before the nation could get on a track leading toward an egalitarian democracy.  And the South had to lose the Civil War if the slaves were going to be freed and human rights embraced.  Both the Third Reich and the Confederacy are now history.  Dead and gone and good riddance.

Overlooking the follies of one’s ancestors is one thing.  But embracing the symbols of the racist and genocidal regimes they lived under is another.

A friend has pointed out my error in referring to the Dixie flag, also called the rebel flag and sometimes the Southern Cross, as the Stars and Bars. The Stars and Bars is actually an earlier version of a flag used to represent the Confederacy. I stand corrected. I should have been more precise. I am referring to the banner that is today associated with the Confederacy, the thirteen mullets (five-pointed white stars) on a navy blue saltire (a diagonal x) framed in white with a red background which was originally used as the battle flag of the Army of Northern Virginia – the white supremacist flag designed by W. T. Thompson, who described it in the Savannah Daily Morning News of May 4, 1863 as “a national emblem… significant of our higher cause, the cause of a superior race.” Originally set on a field of white, which Thompson expressly stated should symbolize the supremacy of the white man, the white field was dropped in the current design by William Porcher Miles, the one-time mayor of Charleston who saw slavery as a divine institution. The association with slavery was enhanced more recently as it became the banner of both the Ku Klux Klan and the Dixiecrats, who ran on a policy of segregation.

Alan, aside from the (very short-lived) "Stars and Bars", every single one of the flags used to represent the Confederacy -- including what became the Battle Flag -- was designed by a known and outspoken white supremacist who fanatically worshipped the "cause" of enslaving black people.

The Battle Flag was designed by William Porcher Miles, a notorious "Fire-Eater" from South Carolina who called slavery a "Divine Institution". He intended his flag to be the national Confederate Flag and not "just" the Battle Flag, but was overruled:

As for the official Confederate Flag, the actual "Stars and Bars" of German immigrant Nicola Marschall's design that Confederate revisionists now claim was the "true" national Confederate Flag, that didn't last very long as it wasn't white enough and looked too much like the real American flag, the hated symbol of abolition. Its resemblance to the American flag also caused problems in the early battles, when troops weren't sure who they should be shooting at.

So William T. Thompson, a newspaper editor in Savannah, Georgia, devised a nearly all-white flag known as "the Stainless Banner".

But that itself became a problem, as it was so white that it looked like a flag of truce. So a red bar was eventually added to make it "the Bloodstained Banner", but by that time the war all but over and it's doubtful that very many of these made it to the front lines. (It was a moot point anyway as most Confederate commanders preferred Miles' design anyway.)