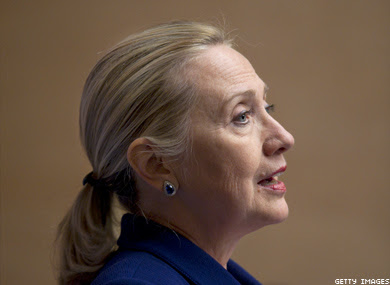 You’ll have to pardon me. I’ve gone all gaga. I’m bouncing around like my dog, who likes to make like a helicopter when she sees me after a long time. (Hence her name, Bounce.)

I’m bouncing for Hillary Clinton and that speech she gave in Geneva on Tuesday, urging the world to do something about the failure to grant LGBT people safety and equality around the world. A first-ever proposal to fight human rights abuses against LGBT people globally. A speech for the history books.

I know this is going to look like raining on our own parade, but hear me out. I want to focus for a minute not on this momentous event, but on Hillary Clinton’s hair.

Once I picked my jaw up off the floor after hearing this speech the first time, I checked out what people were saying about it. I skipped over the Fox Network and Bachmann/Santorum knee-jerk reactions. I wanted to see what ordinary people were saying.

One of the first comments I read was from a gay person wishing she would do something about her hair.

Now it’s possible this comment was made ironically. And I don’t want to suggest this was representative of gay people’s reaction, but gay people are good at deflection and their humor is sometimes deliciously subtle. I’m guessing this comment was made by a person speaking faggotese. Being bitchy is a mechanism of the powerless, and gays do putdowns at the Olympic level. So I know I’m risking missing the point entirely of this bad hair comment, but let me run with it.

I might mention the obvious, that people don’t make comments about men’s hair, but that wouldn’t be true any more. Think Rick Perry, for example. Or Donald Trump. But what I want to do is argue this comment by a gay bitch-queen is not only breathtakingly off the mark, considering what Hillary was doing at the moment for gay people, but also just plain misplaced in its criticism.

To make this great speech Hillary wore a pony tail. Not a Madame Grande Dame hair-do, as Maggie Thatcher used to do, but a friggin' pony tail! If I didn't love her for all the other reasons, I'd love her for that. To me it signalled she has her priorities straight. Serious business now, hair later. And, just maybe, not even later. She’s signalling, whether intentionally or not, that she’s got better things to do right now than take the time to preen.

To be honest, I’ve made snarky comments on Hillary’s hair myself in the past. I’ve often wondered why she can’t find an hour somewhere to have a good hairdresser tidy her up. Her hair really can look scraggly at times.

But Jesus, girls and boys, now? You want to make an issue of that now?

The hair remark was only one of dozens of remarks by her detractors. Rick Perry said fighting against the persecution of gays in Uganda, Nigeria, and elsewhere was worth “not a dime of American taxpayer’s money.” But this is a man who prides himself on the number of criminals his state puts to death. Why should we expect anything else from this lowlife?

Lots of people complained she should have put her own house in order before asking others to change their ways, apparently unaware that no democratic nation can ever be expected to speak in just one voice. The question should be which of their many voices are they using when they address the world – the voice of a leader who threatens war and says things like "Bring it on!" – or a leader who admits we have not lived up to our own expressed ideals and announces specific measures for turning ourselves around.


It's possible, of course, I'm barking up the wrong tree here. It's possible Hillary's choice of hair-do doesn't stem from carelessness or lack of concern. Consider this. 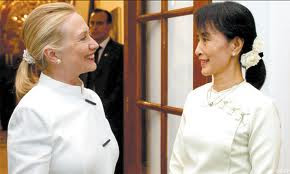 When Hillary appeared with Aung San Suu Kyi last week in Burma, the two of them looked like teenage girls who had decided to dress and make themselves up, hair included, to look alike. And that would mean Hillary taking her cue from Suu Kyi, since Suu Kyi has never changed her hair style in years, as far as I know.

In any case, when you see a picture of the two of them together in Burma it makes you think the hair choice was deliberate, and their affection for each other appeared to be genuine. What a high that must have been for both of them. Hillary may still be riding high off that encounter, as I am off her speech in Geneva. What a powerful message she conveyed in making the effort to stand on the same plain as this heroic figure of Burma, a message that would have gone astray if she had gone all Maggie Thatcher or Madelyn Albright for the occasion. How much more elegance these two women had in their simplicity. Maybe she's decided to hang onto that a while.

There's another possibility, that Hillary thinks she looks good in this hairstyle, and all this speculation is based on nothing. But I can't imagine somebody in her position wouldn't have advisors telling her she's too important for a pony tail. I'm going with the deliberate choice explanation, and - pardon me if I repeat myself - that makes me look upon her with even greater respect and appreciation.

If you haven’t actually listened to Hillary’s speech in Geneva in its entirety, please do. It’s a totally different experience from reading the words. Hillary speaks slowly, deliberately, in plain American English. The speech was perfection. Well written, well delivered, unadorned, and from the heart.

If only this were the image of itself America portrayed to the world all of the time.

Labels: The American Empire at War, The Long Hard Slog to Gay Liberation