What were you thinking? 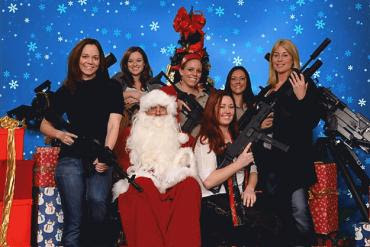 Sometimes the United States of America parodies itself. Reduces itself to a Saturday Night Live skit.

In this morning’s paper is an article, accompanied by the picture you see here of a bunch of kids in Scottsdale, Arizona posing with Santa. They’re all carrying guns. One of them is an $80,000 machine gun. Another is an AR-15 with grenade launcher.

I don’t remember when I first began noticing how militarized everything around me seemed to be getting. The National Rifle Association is one thing, but this is quite another. In this picture with Santa, the kids are not carrying hunting rifles. They’re carrying weapons intended to kill large numbers of people with a single pull of the trigger.

I blogged yesterday about the challenge to laugh “with” somebody and not “at” somebody, which involves being able to see yourself in folks making fools of themselves at any given moment. The two examples I used were a hard-of-hearing old woman and a woman who evidently never learned self-control. Whether the cause of her problems was a lack of education or just a low IQ was never made clear. The point was the world was laughing at them, and the world includes me. And it took me some time to make the laughing with/laughing at distinction. The instinct was to laugh first and analyze later. Some will say justify later.

How we determine what is funny is culturally determined. Values change, and nothing marks cultural gaps the way humor does. Taku looked at those two examples and asked, “Is there something wrong with Germans that they laugh at people like that?” Non-Germans often see German humor as slapstick. I argued that there was nothing particularly German about laughing at the hard-of-hearing or at a crazy lady, that it was modern culture which all modern people share. Differences that once existed among people of European culture have fallen away, and we are all much more like each other and getting more that way all the time.

But this picture of kids with Santa holding guns popped off the page at me this morning as if to remind me not to go too far with that generalization. It’s hard to imagine the people of any other modern nation, European, Asian, or otherwise, coming up with the idea that it’s “fun” to have your picture taken with Santa holding a grenade launcher.

I get e-mails all the time with sloppy sentimental stories of “our heroic boys” fighting in Iraq and Afghanistan, pictures of the flag waving and people with their hands over their hearts and a military band playing. Eisenhower’s warning clearly went unheeded, and the military industrial complex was allowed to take control of the culture.

If you doubt this, look at the faces on these kids. They’re smiling. Only Americans smile like that.

Back during the Vietnam War I went to an anti-war rally in Japan featuring Jane Fonda and Donald Sutherland, held in a large arena near an American military base. Halfway through their act, some guys stopped the show shouting, “If you don’t fight them in ‘Nam, you’ll be fighting them in your own back yard.” My friend, a Welshman, loved it. “Great act you Americans put on.”

I thought of him this morning for some reason. And I heard the granny voice in my head (the one I want to foster before my hearing goes) saying,

“What on earth were you thinking?”