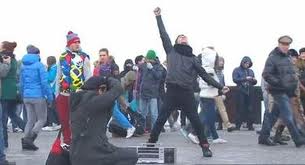 Back in March, I got a link to that marvelous flashmob  event at Sparrow Heights in Moscow, where all these energetic smiling young people are dancing to the music of  Irving Berlin’s Puttin’ On the Ritz.  Of all the examples of this new flashmob phenomenon – every last one of which makes you smile and feel better about the world – this is probably my favorite.  It was performed last February 26, in the Moscow winter, and it makes you wish you were there.

The YouTube commentary is fun to read.  One American right-winger is annoyed we’re all being taken in by these commies and wants us to know that America is still the best country in the world.  And besides we invented Flash Mob.  And besides the music is American, so there.

A wonderful example of how the exception can make the rule, since the overwhelming majority of viewers got caught up in the enthusiasm and gushed over the fact that here we are in 2012, the Cold War is over, Russian young people are singing in English and moving beyond the nasty history of the Cold War.  (Past anti-Semitism, maybe, too.  How many know, I wonder, that Puttin’ On the Ritz was written by a Jew who was born in Siberia?)

There was a time when I was pretty much gaga over almost anything Russian.  I had gotten a taste of the language in college, and that gave me a head start when I studied Russian while in the army, in preparation for a job listening in to Russian conversations in Germany with the Army Security Agency.  This was the 60s, at the height of the time when the Rooskies were bad guys and we were led to believe we might have to shoot to kill and take as many Rooskies as we could, if they ever chose to march into West Berlin.

Some of us talked like that.  Most of my friends knew if the Russians ever came to West Berlin we’d put up the white flag.  Dying has its place when you’re defending home and hearth, perhaps.  But since nobody in his right mind thought we could defend Berlin against a Russian onslaught, we rolled our eyes when some jingoist started into the “When the Rooskies march in” nonsense, and went back to listening to Tchaikovsky and reading Chekhov or following any of a number of other habits we had started in Russian school, when they were trying to teach us who we were supposed to hate and fear.

That’s the thing, you see, about sending your troops to school to learn from native speaker real people.  The native speakers of Russian had all fled their homeland.  But that only made their love of Mother Russia stronger and the tears flow faster when they exercised the opportunity to display their “russkaya dusha” – their Russian soul.

We were tremendously fond of some of these people.  Gospozha (Mrs.) Nessin remained my model of a teacher when I entered the teaching profession myself.  Shakey Jake, the Romanov prince who lectured on Tchaikovsky, amused and delighted.  General Markov, with his sardonic humor and Minnie Mouse, the wife of the Russian Orthodox priest, and Gospodin Sinkevich, who at 60 could still do handstands on the balcony railing - characters worth knowing all.  We used to wonder what they thought about the fact they were teaching us Russian so that we could more effectively carry a gun and kill their former countrymen’s children.  It didn’t occur to us that they were way ahead of us in separating out the complexity of politics and war and nation and culture and good guys and bad guys.

Now, half a century later, I marvel at the good fortune I had in being able to put on a military uniform but, instead of seeing how many bad guys I could blow away with my M-14, going into a classroom and studying the language of these folk of the Evil Empire of the Day.  I joined a choir and sang their folk songs.  Learned words like provolochnie zagrazhdeniya (barbed wire entanglements) and Kak vashe imya, familiya, i ochestvo?  (What is your name, family name and patronymic?) in preparation for prisoner-of-war interrogations.  (When the Russkies marched in and we captured them all, of course.)

I got seats up front at a concert last October by the Mariinsky Orchestra, the former Kirov, which was in town doing the Tchaikovsky Symphonies.  I found myself totally surrounded by Russians who knew this was something they couldn’t miss.  Listening to them bubble with delight and staring into the faces of the young men and women on the stage, most of whom were the age I was when I carried a gun and was supposed to overcome my fear of killing people, I remembered my basic training when somebody told me that one day it could be hand-to-hand with a Roosky with a bayonet, and it would be kill or be killed.   Beautiful people.  Talented people.  I couldn’t stop thinking about how the fates had allowed me not to have to shoot them or stick a knife into them.   And about how many of them, instead of playing Tchaikovsky, went into Afghanistan to die at the hands of the Taliban, whom the Americans were training to kill Russians in those days.

How was I spared?  What did I do to deserve the chance to listen to beautiful people make beautiful music instead?

This feeling came back again as I watched, over and over, this flashmob display of wild enthusiasm at a Russian wedding reception (real or staged – it hardly matters), with the crowd singing and dancing and then shouting “Gorka!  Gorka!” the Russian equivalent of tinkling a spoon on a glass to get the newly married couple to kiss.

If you haven’t seen this event yet, have a look.

Then go read the newly declassified reports of how many times we came close to inadvertently shooting off nuclear missiles at the Russians – killing them, killing us, and destroying the environment for good.

Then decide whether you want to say thank you to the guys who managed to catch the error before the nuclear missiles went off, curse the guys who set the missiles up in the first place, or simply join with the Russians as they marry and have families and keep warm in the wintertime by singing and dancing to the music of Irving Berlin and forget that interlude between the German-hating time of the 1940s and the Muslim-hating time of today.  That long Russian-hating time in between, I mean.

And I hope, if you do take a look at this flashmob event you will take note of the soldiers.  They don’t dance as well as the street sweepers, but they do a pretty good job, all told.  And when you think of Russian soldiers from now on, I hope the image that will come to your mind will be of them all wrapped up in fur hats and ugly green uniforms – and dancing.

Which, you'd think, should call on us to stop and reflect about WHO'S insisting we hate "them" and why. And why the facts of "them" keep shifting from period to period.

Your reflections made me flash back to the brief trip I made to Moscow in the early 1990s. As I prepared to fly back to the U.S., I had a bite to eat at a restaurant in the Moscow airport. Because there were just two people in the entire place, a Russian soldier and me, the owner insisted that I sit with the soldier.

We had a fascinating conversation, since the Russian man didn't speak English and I surely don't speak Russian. Somehow, I learned he had been in Afghanistan.

And during the conversation, he did say something I understood, in broken English, and it will never quite leave my mind: he said, "Reagan, Gorbachev: it's all theater. All political theater."

If our world could be governed by people who have insights like that . . . .