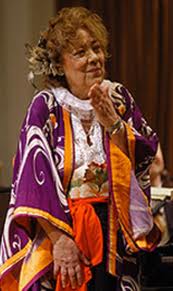 If you are unfamiliar with Fujiko Hemming (or Fuzjko, as she spells it), take six minutes and thirty-eight seconds to enjoy a performance of Liszt’s La Campanella, her signature piece.

Taku and I are great fans of this lady.  She’s on our CD player all the time.  And last night we heard her play again at the Palace of Fine Arts Theater, that lovely barn of a place that nonetheless gives you marvelous access to the performer, with its comfortable seats in the round creating an atmosphere of closeness and familiarity, despite its size.

She played the same program, essentially, that she played last year in the same location.  She started with Chopin, played some popular Debussy, then that awful Mussorgsky thing, Pictures at an Exhibition, and ended with Liszt, including the Campanella piece.  And another Chopin piece, a nocturne, for an encore.

She doesn’t have the impact of a young lion like Lang Lang; she’s not a take your breath away Van Cliburn; she probably won’t go down in history like Vladimir Horowitz or become a legend like Wanda Landowska.  But she is a world-class concert pianist, despite her eccentricities and reputation for missing notes all over the place, and has a devoted following, especially in her Japanese homeland.  The audience at the Palace of Fine Arts last year and last night seemed to be perhaps 90% Japanese, although that may have to do with publicity – the concert was a charity concert for victims of the March 11 earthquake and tsunami in Fukushima.

She’s a character.  She’s an old lady who moves slowly and dresses in her own unique style, ranging from quiet elegance to bag lady with flowers in her hair.  She’s a painter, an animal lover – cats, in particular – vegetarian, appreciative of her fans, generous in her charity.  A personality you get to know after a while and find appealing.

I can’t be sure how widely known she is outside of Japanese circles, but I do know Japanese have taken her to heart.  She is the daughter of a Japanese mother who went to Berlin in the 1930s to study music.  Her father was a Swede of Russian origin who left her mother when Fujiko was just a child.  Fujiko was raised in Japan, but lives now in Paris and keeps a close connection with her European origins, including her father’s family, apparently.  She suffered a devastating loss of hearing in both ears at one point but made her way to Sweden, thanks to her Swedish citizenship, and found a partial cure – she has 40% hearing in one ear, and that has enabled her to teach and pursue a career as a concert pianist.

She gives the impression of not caring about the small stuff.  She seems to play for the joy of music, and not so much with an eye on her career.  A romantic, a lover of beauty, she creates the impression that says, “Here I am, take me or leave me, hope you enjoy this, don’t ask for more than I’m capable of.”  If that comes across as tired, it’s possibly because she’s nearly 80 years old and is still playing Chopin and Liszt pieces not written for sissies.  The sheer accumulation of energy created by listening to fourteen Chopin etudes in a row – her opening number done without applause breaks all in one go – is breathtaking.

Then there’s that Pictures at an Exhibition piece.  I didn’t like it last year, and liked it even less a second time around.  For me it’s a novelty piece.  I risk the label of insensitive clod, possibly – I know the piece has its fans, some of whom gush over its “musical invention…vivid aural form…clocks, bells, chants, feathers, flames..., etc.,” to quote one writer at Wikipedia, but I hear mostly tramping through the living room in a pair of muddy boots.  Alas, Fujiko seems to love it, and she carries it with her wherever she goes.  That’s OK with me.  I can handle anything that she does, as long as she keeps the Chopin coming and always ends with Liszt.

Listen to her do one of my favorite Chopin pieces – the “I’m always blowing bubbles” – (or was it  “chasing rainbows,” come to think of it) number – Fantasie Impromptu  – (audio only, unfortunately).

If you’re up for a competitive listening of La Campanella, start with a couple of Lang Langs for some hot shot versions, this one with a Chinese announcer twit who talks over his music at the start, and this one of Lang Lang in front of a high-energy London crowd trying to smother him in dry ice.  Then by all means have a go at the world master, Evgeny Kissin's version.  That brilliant white boy (especially back when he had that 60s Afro) brings me to tears, just thinking of what the human brain and hands are capable of, when they work together.  Or is he a robot, maybe?

Then listen to lovely Alice Sara Ott for yet another crisp clear and technically perfect (to my ears) version.

If after that you go back and play Fujiko again, you’ll see what I’m talking about – not up there with the biggies in crispness or pizzazz, certainly not with Kissin or Lang Lang in pyrotechnics.  But – and maybe it’s just those pudgy grandmother fingers – I feel a warmth in her playing that keeps me coming back to her again and again.

And that means I’ll go again a third year in a row if she comes back to San Francisco next year.  I’ll just maybe take a coffee break during the Mussorgsky.