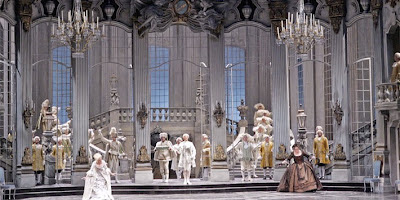 It is always enlightening to read such a review as this one of the great MET performance of Rosenkavalier in the 2009 season, by Anthony Tomassini, New York Times music critic.  Tomassini is a man in his mid-60s.   He’s been around.  He was mentored by Virgil Thomas, about whom he wrote an award-winning book, and by the Boston Globe’s music critic, Richard Dyer.  Tomassini also wrote a guide to the opera, titled Opera: A Critic's Guide to the 100 Most Important Works and the Best Recordings.  He has credentials and background, in other words.

Still, I always squirm when I hear critics take potshots at the greats.   I know it’s their job, and they usually know what they are talking about, but it seems so petty, somehow, to hear things like “Ms. Fleming may have lost a little of the sumptuous vocal beauty and some of the soaring pianissimo phrases of before,” and then damn with faint praise: “Yet Ms. Fleming and Ms. Graham sang splendidly over all.”

The little boy in me who sat in wonder in the theater last night, listening to a rebroadcast of that performance, was so carried away that he wants to jump up and down and dare anybody to talk like that in front of him.  Pull out my sword and challenge him to a duel.

And, by the way, just so you know what I’m talking about, stop and have a five-minute listen to the trio in the third act “Hab mir’s gelobt.”  It’s in concert form and lacks the richness of the opera staging, and it’s Renée Fleming with two other singers, but it will illustrate what I’m about to say.

If you’ve even the slightest appreciation for the soprano voice, Richard Strauss has to be your god.  So in love with women’s voices was he – the soprano voice, in particular – that he wrote an opera in which a fat lady mature singer has to play a seventeen-year old impetuous loverboy of a middle-aged woman – and the role is so taxing only the most highly trained and experienced can handle it – just so he could feature not two but three glorious soprano voices going at once, later on.  So you get maximum cognitive dissonance.  And then you have to sit through the trumpet sounds of orgasm as the curtain goes up on the first act and watch them kanoodling in the bed.

Back in the day when I was going to the Frankfurt opera several times a week for seventy-five cents a pop, this was all too much.    I was only 22 or 23 at the time, and this was just too much suspension of disbelief for my young years.  Besides, my idea of great music at the time was Smetana’s “Ma Vlast” or anything by Grieg.  Tchaikovsky and Rachmaninoff were cool dudes, or whatever term we used in those days.

When I got to Frankfurt, after a year at the Army Language School in Monterey, the Army had messed up and lost my records.  They had all my records, actually – just not my pay records, so for about three months I had no money coming in.  I had to borrow from friends.  You can’t get the military to hurry when they don’t want to, and besides I had free room and board so what’s the wuss, they said, and it was a thin time.  I couldn’t travel, couldn’t go to restaurants.  Movies were $1.50, if I remember right, and the opera, because Germany subsidized it for American soldiers back then, was $.75.  You had to take what you could get, sometimes behind a post, but you got to go to two operas for the price of one movie.

One of my friends in Frankfurt was Dennis Wakeling.  He had graduated from USC in opera and later became opera director at North Texas and contributer of some fifteen articles in the Opera Quarterly that I’ve been able to dig up.  We used to have dinner at the mess hall and he’d fill me in on the plot and background of the opera we were about to see.  It was Opera 101 and I could not have had a better introduction.  I’ve always felt a little sad I didn’t build more on this early experience.

Dennis tried to hide his dismay at my plebeian music interests.  “Grieg!  Good God,” he said.  “He’s practically honky-tonk!”  Actually no, he never said that.  I just heard him say that.  What he really did say, though, was “Someday you will come to appreciate Strauss – nobody, but nobody has written more beautiful music in the twentieth century.”

What I didn’t like about Strauss was what I used to see as honey on sugar-cubes.  Too much sweetness.  Too much lush.  All dressed up in fancy dress and nowhere to go.  Sweeping phrases, like a ham actor swinging his arms on stage, moving from one exaggeration to another and never getting anywhere.  All this build-up and never any resolution.  I saw it as music to drive you insane with frustration.  (And yes, I'm trying to underscore what I'm saying with all these repetitions.)

Then something happened.  At a dark moment in my life, one of those times when you get real serious about life and death and the meaning of things, I happened upon Richard Strauss’s Four Last Songs, sung by Elizabeth Schwarzkopf.  I was in just the right head space, evidently.  The music went straight in.  A direct contact with the nervous system.  I’ve never been so moved by anything musical like that in my life, before or since.

For many years I only listened to Four Last Songs when I could get away from it all and give it my full attention.  Shut out the world, use it as meditation.  It didn’t lift my spirits, necessarily, but invariably gave me a sense that life is a lot richer than I was giving it credit for.  I now go back to it more regularly, although I still make a special occasion of it.

At some point it occurred to me that if I could connect so strongly with Strauss's Four Last Songs, maybe it was time to try Rosenkavalier again.  Maybe I was way off about the guy.  Hadn’t he done Also Sprach Zarathustra – the opening fanfare to the movie 2001 – A Space Odyssey?   [Or if you want to listen to the whole thing in the non-whored version.]   And other things I found worth listening to.   Salomé, for example.  Till Eulenspiegel.   But so strong was the memory of walking out on the first act of Rosenkavalier that I passed up opportunity after opportunity over the years to go back and try again.

And maybe that’s why last night’s performance was such a blow-me-out-of-the-water experience.  I went this time to the Westfield in downtown San Francisco, out of the way up on the fifth floor of this obscene mall where you expect to find things like Batman movies – a giant theater, comfortable leather seats, clear view of the giant screen.  You sit there and Placido Domingo comes out and talks just to you, telling you you’re in for a real treat.   The music starts, it’s that same scene of orgasmic trumpets, the  same two fat ladies in the bed romping with chaste kisses (we can’t really get into it, can we).  But this time I’m with the theater full of lesbians who know a good thing when they see it, and in no time at all I am carried away.  “Fool!  Fool!  Fool!” the little voice keeps saying in my head.  “All these years – a whole half century – you walked away from a thing of such beauty.”

It does help that it’s the MET.  I’m a big fan.  They can do no wrong.  Well, theoretically they can, of course, but I’ve never seen them do wrong.  Their performances are known for their all-around brilliance.  This one would be worth seeing just for the costumes alone.  Hell, the furniture alone.  The orchestra under the direction of Edo de Waart  (OK, OK, Mr. Tomassini, you say he allowed them to bully the singers in the first act.   If you say so.)

You should be in the right mood.  You should be able, if you see it in the simulcast version on screen as I did, to sit through over three hours of luscious soprano voices going on and on and on and on.  It’s got to have the longest third act in history and you argue with your back and your bladder (they cut out the intermissions, these megaplex idiots, apparently to clear the mall by 10 p.m.) so that your eyes and your ears can have more and more, as if you were listening to half a dozen encores.

I went in expecting good things.  It was Renée Fleming, after all.  But I did not know Susan Graham, who sang Octavian, the Rose Cavalier.  Didn’t know she would be Fleming’s equal.  Didn’t know this comedy would actually work.  I’m not much for farce, and opera buffa and I don’t often hit it off.  But I roared in places, so well done were the acting and the set-ups.   Loved the Icelandic bass, Kristinn Sigmundsson, who sang the role of the oafish Baron Ochs.  Enjoyed it the way you’re supposed to enjoy a good concert or drama – or opera, which puts them together.  By getting loud and laughing and crying in all the right places.

I did a lot of both.  Now comes a whole new stage in my life, the post-Rosenkavalier era – as an unabashed lover of Richard Strauss.

Dennis Wakeling died in 1992.  I’m sorry I never got to tell him how well he called the shots on that one.


the presentation of the Rose in the Second Act:  http://thefoolandtheopera.blogspot.com/2010/01/now-showing-at-cinema-nova-mets-der.html


Susan Graham in the costume she describes as a disco ball for opera (the photo doesn't capture the sparkle): http://www.examiner.com/slideshow/metropolitan-opera-s-der-rosenkavalier-with-fleming-graham?slide=8823356