And Ever Shall Be 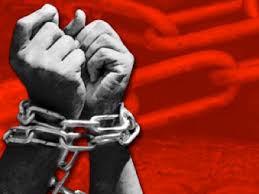 Eric Zorn had an interesting article in the Chicago Tribune yesterday about Lincoln, the best film I’ve seen all year.   I had not heard before that in the movie, which centers on the fight to pass the 13th Amendment, the one that outlaws slavery, they changed the names of the actual people ­– democrats, they were in those days ­– who voted in favor of maintaining slavery.  The reason?  So as not to bring shame on the descendants of those congressmen.   Bravo, I say.  One of the more insidious of many insidious biblical passages is Exodus 20:5, where God allegedly says, “I, the Lord your God, am a jealous God, visiting the iniquity of the fathers on the children, on the third and the fourth generations of those who hate Me…”


This is an example, if you need one, of why it’s way past time for the humanist values of universal brotherhood and sisterhood to take precedence over the traditional values of the abrahamic religions.  Time to see tradition for what it is, not a positive notion but a neutral notion, like culture, containing things that are sometimes lofty and worthy of preservation, and sometimes pernicious, and worthy of the trash bin of history.

Zorn wonders if we will some day make a film about the fight for gay rights in America and if we will have to do the same thing, change some names for the benefit of those who trace their ancestry back to present-day homophobes.

It’s an intriguing question.  Imagine sitting in a high school history classroom in 2163 when the topic of the Supreme Court battle of 2013 comes up, and your name is Arthur Scalia, and you are a direct descendant of Antonin Scalia.  However the decisions go on DOMA and Prop. 8, Scalia is expected to act on his previous inclinations to see gays in the same camp as people who commit murder, incest and cruelty to animals.   How would you feel?  (I am tempted to ask a second question: how would you feel about your great-great-great grandfather if you turned out to be gay, but I don’t want to push the argument off the point.)

It is entirely possible, of course, that I am doing Antonin Scalia a great disservice in believing I can predict the future.  Who knows?  It is conceivable, however unlikely, that he could end up writing the opinion that the time has come for LGBT Americans to enjoy the right to full and happy lives in America as LGBT people, instead of reworking their psyches and their relationships according to the belief that, because God told Adam and Eve to be fruitful and multiply, human sexuality must be expressed heterosexually or not at all.

I could be very wrong, yes.  But I am having trouble at the moment getting past something Scalia wrote in 2003.  The Supreme Court had just overturned a 1986 decision (Bowers vs. Hardwick) that had upheld a law in Georgia that made oral and anal sex illegal.  For gays.  The law did not apply to non-gay citizens.  In that 1986 decision, the majority opinion was written by Chief Justice White, who argued there is nothing in the constitution that allows homosexual activity.  Chief Justice Berger went even further in his concurring opinion.  Berger quoted the 18th Century jurist William Blackstone, who described gay sex as an "infamous crime against nature", worse than rape, and "a crime not fit to be named."

When that decision was overturned in 2003, in connection with a case in Texas, here’s what Scalia wrote in dissent:

The Texas statute undeniably seeks to further the belief of its citizens that certain forms of sexual behavior are ‘immoral and unacceptable,’ . . . the same interest furthered by criminal laws against fornication, bigamy, adultery, adult incest, bestiality, and obscenity. Bowers held that this was a legitimate state interest. The Court today reaches the opposite conclusion. The Texas statute, it says, ‘furthers no legitimate state interest which can justify its intrusion into the personal and private life of the individual,’ …The Court embraces instead Justice [John Paul] Stevens'  declaration in his Bowers dissent, that 'the fact that the governing majority in a State has traditionally viewed a particular practice as immoral is not a sufficient reason for upholding a law prohibiting the practice,' . . . This effectively decrees the end of all morals legislation.

The end of all morals legislation?  The arrogance of that statement takes the enamel off your teeth.  Scalia is a conservative Roman Catholic, the kind that is unafraid to claim that the Bishop of Rome with his "infallible sacred magisterium" has the right to determine what is moral and what is not.  One of his sons is a priest who sides with those who would get rid of the Vatican II reforms and bring the church back to where it was when Pius IX declared himself infallible.   Conservatism – the way it was is the way it should be – apparently runs in the family.

Scalia père is  known for his “originalism” orientation to constitutional law.  Want to know what’s right?  Just look at how it was back then.  Never mind that “then” included slavery, child labor, defining American genocide as “clearing the wilderness” and keeping the little woman barefoot and pregnant.

When the Court decided in Atkins v. Virginia in 2002 that the death penalty imposed against a man with an IQ of 59 should be seen as unconstitutional, it made its case on basis of an “evolution” of ideas, specifically on the common view held today that executing the mentally retarded was a barbaric practice from the past, and as such, against the Eighth Amendment, which prohibits cruel and unusual punishment.

Scalia dissented.  His reason?  It would not have been considered cruel or unusual to execute the mildly mentally retarded at the time of the 1791 adoption of the Bill of Rights.  So much for evolution of ideas, or of morals.  Living Constitution?  Where’d you get that idea?  Changing times?  Don’t make me laugh.  “As it was in the beginning, is now, and ever shall be,” is more like it.

Similarly, Scalia reasoned that even though the Second Amendment gives us the right to raise a militia, and not the right to own guns per se, we have that right because at the time the Second Amendment was ratified (emphasis mine),  the right to bear arms did not have an exclusively military context.   All argument about changing times goes right out the window.  What was good in the horse and buggy days is evidently good in the age of bullet trains.  And AK-47s that shoot off 600 rounds per minute.

So I may be worrying unnecessarily that putting the decision to allow gay men and women to marry in the hands of the likes of Scalia is handing us chickens over to the fox.  He may surprise us.  Then too – and this is more likely – he may be outnumbered.

And you’ll get some idea of what it feels like to be sitting and waiting for the Supreme Court to make a decision that, if it goes the “conservative” way, will encourage every kid in the country who bullies his classmates with the label “faggot” to think he’s on the right track, and license every bible-thumping preacher who urges his congregation to “pray the gay away” to go on doing things – exorcisms, for example – “the way they have always been done.”

We'll know in a few months.