The Savior of Shingo 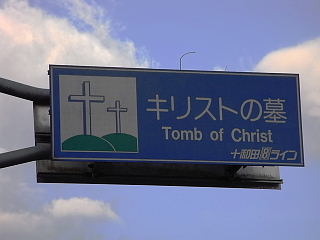 There are so many things about Jesus of Nazareth that people don’t know.  They think he was born at Christmas, when actually he was probably born in September.  They know that he got gold, frankincense and myrrh for his birthday, but don’t know that frankincense is good for arthritis and these were gifts more suitable for the aging and the dying than for those just being born.   They assume Luke and Matthew were right in telling us he was born in Bethlehem, because his mama and daddy had to go there to pay their taxes and be counted in a census.    They don’t know there is no evidence of a census from any Roman sources and that scholars are coming around the to view he was probably born in Nazareth.

All very interesting, and it doesn’t really change anything.  Jesus, if you’re a believer, is still the Son of God.

It’s easy to trip over historical facts when you go back to a pre-literate time and have to depend on he-says, she-says.  Since that time, we now have universal literacy, at least in the Christian parts of the world, so when we hear that the Garden of Eden was in Missouri, and the Hebrews came to America in little boats, and Jesus visited the American continent after his resurrection, we know we're on much firmer ground.

Now, thanks to a Smithsonian publication I just came across, I find there is a connection between Jesus and Japan, as well.  Which delights me no end, since Japan is home to me after twenty-four years of residence there.  I just wish I had heard before of Jesus’s burial place in Shingo, in the north of Japan.  I would have made a point of hopping a train and walking where Jesus walked.

You know there are twelve years of Jesus’ life unaccounted for in the Bible.  Turns out he went to Japan, where he studied theology.   He also became a disciple of a great master, learned Japanese, and studied Eastern Culture.  At age 33 he returned to the Holy Land by way of Morocco and spoke of the “sacred land” he had just visited.  It’s all there in black and white.

Where things get really interesting is when he was condemned by Pontius Pilate to die for being a troublemaker.  Jesus got his brother Isukiri to take the rap for him.   How that would make Jesus a good guy, much less divine, is beyond me,  but I guess that’s what faith is for.

Once Isukiri was in place on the old rugged cross, Jesus fled back to Japan with one of his siblings’ ears and a lock of Mary’s hair.  This time he went the hard way, trekking across Siberia for four years and then to Alaska.  (Another test of faith here – why Alaska?)  In any case, he ended up in the port of Hachinohe, and hopped an ox-cart to Shingo. - 新郷村 - in Japanese.

I know this story is far-fetched.  But don’t take my word for it.  It’s in Wikipedia, and you know they don’t lie.

And here’s the Smithsonian article, and a BBC report from 2006: 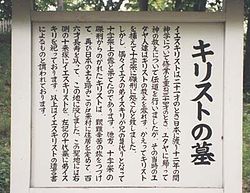 Here’s a sign next to the Jesus's gravesite next to his brother Isukiri's, with the legend explaining how Jesus settled down, became a rice farmer, married a local girl named Miyuko, had three daughters, and lived to the ripe old age of 106.  If you can’t read the small print in Japanese, here’s an English translation:

When Jesus Christ was 21 years old, he came to Japan and pursued knowledge of divinity for 12 years. He went back to Judea at age 33 and engaged in his mission. However, at that time, people in Judea would not accept Christ's preaching. Instead, they arrested him and tried to crucify him on a cross. His younger brother, Isukiri casually took Christ's place and ended his life on the cross. Christ, who escaped the crucifixion, went through the ups and downs of travel, and again came to Japan. He settled right here in what is now called Herai Village, and died at the age of 106. On this holy ground, there is dedicated a burial mound on the right to deify Christ, and a grave on the left to deify Isukiri. The above description was given in a testament by Jesus Christ.


If you happen to be in Jackson County, Missouri, when he comes back, say konnichi wa to him for me.

I knew there was a reason Taku and I felt an urge this year to have our Christmas Eve dinner be temaki sushi.  So much more meaningful than turkey or goose.