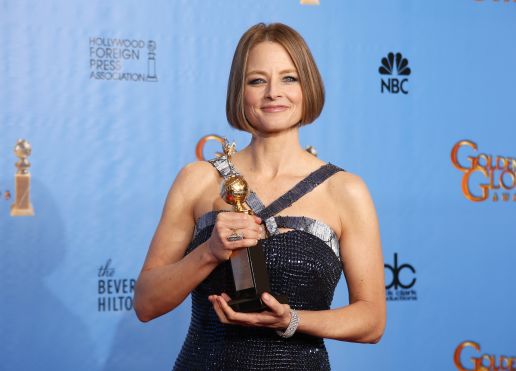 I just listened to Jodie Foster's speech at the Golden Globes.


I had been avoiding it, because the news presented it as a coming-out speech, and I thought to myself, BFD - about time!

Coming out stories are all the rage these days, I thought.  A chance for people to get weepy and touchy-feely and have the cameras measure the distance and rate of flow from the tear ducts and make us all feel warm and wonderful for thirty seconds before moving on to the next jolt of media stimulation.

But that bit of cynicism stemmed not from my generous parts, but from my “Oh, please!” parts where gay people in the public eye play coy with their gay identities, thus paying court to the homophobia in our culture which persists way way way past its actual shelf date.  Being in the closet in Hollywood in this day and age?  Like I said.  Oh, please!

But as I listened to Jodie Foster’s rambling moment in the sun, I heard her say something about being in the public eye since the age of three.  And that put her desire for a private life in perspective, and I realized I was being too hard on her by far.  After all, I’ve avowed over and again my view that, given the unpleasant consequences of coming out in some circumstances, one really needs to give people copping to gay identity some space.  Some time to assess the situation and figure out how to admit that they had been living a lie up to that point.  So it was a chance to match my behavior and my judgment with my principles, and just sit back and let Jodie go.

I’ve come a long way since growing up in New England with a Pilgrim identity, where kids were taught how to behave by looking out of the corner of their eye at the adults to see what they were sniffing and clucking at.   The Catholics went to the Magic Show.  We went to a church where the Sunday sermon was the same thing every week.  “Be nice.”  Catholics went to heaven by confessing when they touched themselves down there.  We in the Pilgrim Congregational Church went to heaven if we were nice.  And that meant collecting all the ways there were to be nice.  Nice people don’t pick their nose.  Nice people don’t make noise with their mouths when they eat.  Nice people don’t speak of other people’s infirmities to their face.

Somebody who really had my number commented to me once, when I said I had left religion behind, “Well you may have left religion behind, but you’re still carrying around the mold it came in.”  Even after I decided there were simply too many errors of fact in the Bible for it to be any kind of authority, and had read the Old Testament carefully enough to affirm that God was really an egotistical bully, I still hung on to the notion that if I said out loud that I was gay that I was somehow damned.

Don’t care what you do in your bedroom.  Keep it out of the salon.

Don’t do it in the road and scare the horses.

Don’t give me information I don’t need to know.

Fast forward half a century and I’m listening to Jodie Foster standing up on stage, all awkward and goofy and gangly, telling her world she loves her kids and she’s lonely, and my heart went out to her.  You go, girl!  You tell your story.  This is your time and your place and you tell it your way.

It’s hilarious to go on the gay websites and listen to all the chatter.  And most of them end with, “And didn’t she look faaaaabulous!”

We can be a silly bunch.  Awkward sometimes.  Tasteless sometimes.  But we’re movin’ on up at last, and soon we’ll settle down and become unremarkable.

And maybe that won’t be such a good thing.

Maybe we’ll decide it’s OK to be awkward and inarticulate, as long as you look Fabulous.

I’m for that, actually.  Provided we get a little better at looking beneath the surface.