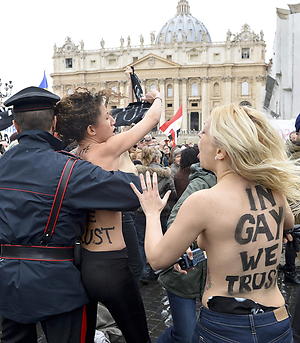 It's only four women, but it's a start.

Four Ukrainian women took their shirts off at the Vatican today and showed their boobs to Papa Ratzinger.

A truly naughty act.  According to USA Today, the pope "appeared not to have been disturbed."

Possibly he's seen the upper parts of the female anatomy before.  And, of course, his eyesight isn't what it used to be and he was way up there on his balcony and they were down in the crowds at St. Peter's.

The spokesperson for the protest explained that they were angry at his moves to stop the advance of same-sex marriage.

Interesting example of English as an international language.  The women had "In Gay We Trust" written in big capital letters on their backs.  Obviously a spin-off on the American credo in dollar omnipotens - "In God We Trust."

But that's up for interpretation.

It could also be a sign of democratization of the Vatican, for all I know.  We'll know if Benedict speaks out on their behalf and claims to disagree with them but expresses a willingness to die for their right to protest.

Meanwhile 300,000 people marched in France to protest the move of the socialist government to legalize not only same-sex marriage but the right of LGBT couples to adopt kids.  Same arguments.  God made one père and one mère and so it follows logically that if kids in need of adoption have to wait a little longer - like till age 18, for example, for the troublesome ones that les gais et les lesbiennes tend to be more willing to adopt, well that's tough Ukrainian body parts.

300,000 is a lot of folk.  But France, unlike the Vatican, is a democracy and the majority of French people seem to be in favor of extending rights to gays and lesbians, bless their croissant loving hearts.   Stay tuned to the news from gay Paris.

And Ukrainian ladies (and others) living in Italy and fighting homophobia, more power to you.

The world loves it when you put your whole body into it.

Keep up the good work.