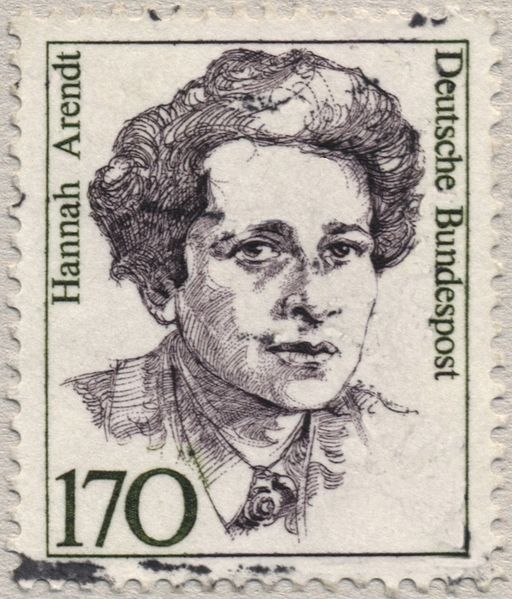 I went to see the film Hannah Arendt with friend Jason yesterday, and I can’t get it out of my mind.  In trying to write down my thoughts I’ve opened five separate word files already.  I don’t know if I’m every going to be able to herd these wild horses, so let me just send out some bits and pieces, in no particular order. The movie is what I call an absolute must-see.  Barbara Sukowa strikes me as born to play the role. Would like to write a movie review, if I can pull one together, but I'm not there yet. Not that there aren't plenty of good reviews available on Rotten Tomatoes.

But if you want to see an interview with the real Hannah Arendt, there is a marvelous one available in German, with English subtitles that will make you weep, when you realize such things were once available on television somewhere in the world.  It was an interview she did in 1964 with master interviewer Günther Gaus.  There’s another version with Spanish subtitles, if you prefer.

And if you want to go into the content of her ideas in this interview a little more deeply,
there is a 9-page commentary on the interview available from the introduction to the book Power, Judgment and Political Evil by Danielle Celermajer, Andrew Schaap and Vrasidas
Karalis that is very much worth reading.  (It is available, incidentally from Amazon in Hardcover for $9717.70, and in a used copy for $1000 – and I leave it to you to explain to me that particular example of madness loose in the world.  It’s also available as an e-book for a mere $79.96.)   It focuses on her personality, the respect Gaus and Arendt have for each other, and her marvelous control of the German language, in which her thoughts had their expression.  A treat and a half for anybody with an appreciation of the German language.

One gets a taste in the interview of how much Arendt had to say about the interplay between thought and action.  Or, more importantly, about thought as a kind of action, and the importance of thought as a way of dealing with others and the irresponsibility of thought disassociated from engagement with life.  And an understanding of the importance she places on thinking gives a much greater force to her criticism of Adolf Eichmann for being a man who did not think.

She has suffered mightily from attacks by people who tried to make her out to be a defender of Eichmann in Eichmann in Jerusalem, a gross misrepresentation of her thought.  And by people who called her a self-hating Jew, another gross misconstrual of her thought.  Many people so wanted Eichmann to be a monster that they never forgave her for refusing to go along.  He wasn’t a monster.  He was a man who didn’t think.  A bureaucrat whose insistence that he just followed orders brought to life the argument that that’s where the real nature of evil is most evident.  Evil is not radical, according to Arendt.  Not satanic.  Not a force on a par with good.  One can be passionately good.  One cannot be passionately evil, only dully evil.

In her philosophy of good and evil critical thinking is central.  And that means language is central, as is clarity of thought.  And comprehension is a life-long venture.

In any case, if you have the time and the inclination, have a read of the pdf file as another way of approaching the mind of this marvelous thinker.

And if you get a chance to see Barbara Sukowa’s portrayal of her in the film Hannah Arendt, don’t be put off by the first fifteen or twenty minutes where it appears you’re in for a stiff dose of dull Germanic philosophizing.  Trust me.  The film and the character of the woman will grow on you.

Photo credit: Note the source of this photo argues that since this image is of a postage stamp it should be in the public domain, but may not be.  I'm taking the liberty of assuming that it is, and will, of course, remove it immediately, if I turn out to be mistaken.