I can’t say how many times I’ve repeated that insight my friend Luis came up with in summarizing an essential feature of Japan.  It has the world’s best microsystems, he said, for dealing with some of the world’s worst macrosystems. 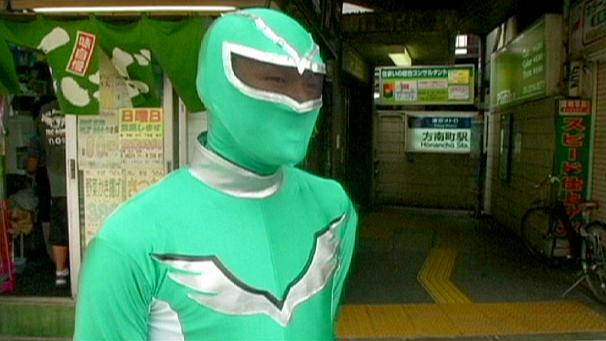 Yet another example showed up in a news item today about a green-uniformed superhero, slightly more Spiderman than Superman, who saw a need and has set about filling it.

West Central Tokyo’s Hōnanchō Station, the end of the line for one of the Marunouchi line’s branches, was built in 1962, before the country became rich and could afford to put elevators and escalators in every station.  Still today, it is one of many stations where there is no way around climbing up and down the stairs, schlepping with you suitcases, baby carriages, shopping bags, or a grandma whose legs don’t work like they once did.

Tadahiro Kanemasu to the rescue.  He has made himself available to carry those items, like baby carriages, that make getting to and from the platforms a nightmare.  Because he has a full-time job, he can only do it for a couple hours a day, and he is looking for other volunteers.

If he tried that here, I’m convinced somebody would throw him in jail – or at least call the cops to get him evicted.  There’s something suspicious, even creepy about a guy who hides his face in public.  As for putting on a green body suit, well that’s even more reason to steer clear.

But this is Japan, where giri is a living concept, the idea of obligation.  People are raised to believe it’s better to do favors than to receive them, better to have others obligated to you than be obligated to them.  One can make too much of this traditional value, and you hear all the time that these traditional ways are giving way and Japan is becoming more and more like other modern countries.  But there’s truth to the notion.  Just try giving somebody a gift or doing them a big favor and watch what happens.  You’re liable to get a gift right back.

Kanemasu works with this idea himself.  Putting on a mask, he says, makes it easier for people to accept a favor from him.  It’s a little less personal to let Superman pull you out of a jam than one 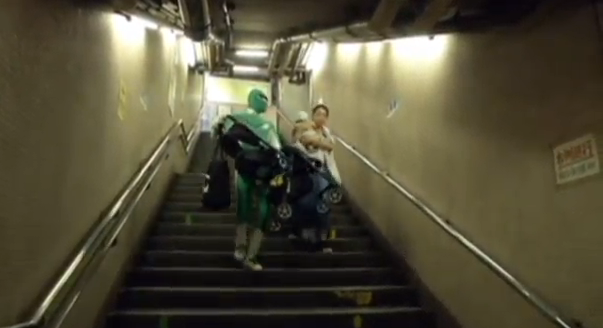 of your neighbors, who you see every day and will have to bow your head and remember the favor every day till the cows come home.

Elevators and escalators in public conveyances are no small thing.  Here in the San Francisco Bay Area, each time you enter BART you hear announcements like, “All elevators are in operation.”   The first time I heard that after coming back from a couple decades living in Japan I just laughed.  So American, I said.  When elevators break in Japan, they fix them immediately.  In America they post an “out of service” notice.

In time, I learned the reason was more complicated.  Because here we have so many homeless people and other people with drug-fried brains, we have closed the rest rooms.  Heaven forbid somebody should use one to shoot up.  The result is there are no public restrooms in any of the BART stations in downtown San Francisco.  If you’re well dressed, you learn where the hotels and other places are where you can sneak in and have a whiz.  If you look like you’ve been sleeping on the street that option is not open to you.  The result?  The elevators become like the back alleys, places to relieve yourself when no other options seem available.  When that happens, transportation officials have to close off the now offending elevator or escalator.

I’m getting up there in years and I have an old man’s bladder.  I can’t tell you how often I’ve gone into the city and back in extreme discomfort because of the lack of rest rooms.  Add to that the broken escalators and elevators, and you can see some pretty good reasons why people refuse to get out of their cars.

Japan’s public transportation is infinitely superior in that way.  Rest rooms everywhere.  And in most places elevators and escalators to get you up and down the stairs.  The country is now rich enough to provide such amenities.  For the most part.

And when it can’t, there’s always the Green Hornet.

I left Japan seven and a half years ago now.   I’m happy to be back on this side of the pond and don’t spend a lot of time missing Japan.

Today, though, was an exception.

Labels: My Life in Japan