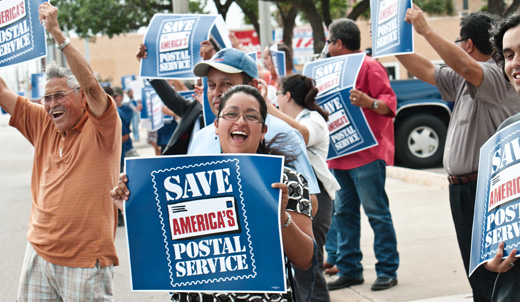 It’s no secret the U.S. Post Office has hit hard times.  Tea Party darling Darrell Issa chairs the panel that overseas the post office in the GOP-run House, and is in a position to kick it while it’s down.  It’s government run, you see, and therefore evil.  Never mind that it costs the American taxpayer not one red cent, but is paid for by its users.   Republicans saddled it with a requirement to fund 75 years of pension costs in advance and within the next ten years.  Why?  Simply because it is a government institution.   The only way to pay for all this is to cut back radically, lay people off, eliminate Saturday delivery – in short make it even more difficult to run at a profit and make private corporate alternatives like UPS, FedEx and DHL more attractive.

By spreading the notion that, like schools and hospitals, the post office should run at a profit, we might even consider shutting down rural post offices and raising prices to the point where only the rich can afford their services.  As it is, the p.o. is losing 100,000 jobs by attrition and another 100,000 are likely to get fired. They’re talking about cutting Saturday delivery everwhere and all those magnificent old buildings – Berkeley has one – built in a day with a whole lot more civic pride are on the auction block.  Tear it down.  Make a parking lot maybe.  Or, better yet, sell it at a huge discount to corporate America and let them run it as a private institution.  We’re doing it to schools and to prisons.  Why not the libraries and the post offices, says corporate America.

The effects are tangible.  There are no longer stamp machines in my local post office.  No more scale for weighing my own letters.  No pens.  No directions on which forms to fill out.  Take a number and stand in line for half an hour and the lone postal worker on the job will be happy to serve you.  So the signs say.  The faces carry a different message.

But it’s not all bad news.  I just had one of those moments of serendipity that can make your whole day.  Week, even.

My friend Barbara in Berlin went through her mother’s things after she died recently and found some letters I had written from 1965 and from 1982, along with several photos of my friend Merrill, who died in 1974.  Merrill and I were in the U.S. Army in Berlin in the 60s.  Barbara’s father was active in a German-American friendship organization called Das Tor [the (Brandenburg) Gate], whose activities included inviting American soldiers stationed in Berlin to a Thanksgiving Dinner, back in the days when the Amis were saving the West Berliners from starvation by flying in supplies in the famous Air Bridge, and relations between Berliners and Americans were at an all time high - as good as it ever gets for an occupation force.   Barbara was eight years old at the time, and over the years, through her father’s death, and Merrill’s death, and recently her mother’s death, we had become close friends and Berlin remains to this day the home I was planning to make but never quite got there.  Memories are rich and plentiful.

About a week ago Barbara e-mailed me and asked, “Did you get that packet I sent you?”  I hadn’t, and asked her what was in it.  “Just some old letters and photos of you and Merrill from the old days.”  I felt ill.  Over two weeks had gone by and nothing from Berlin had arrived and I was convinced my mail carrier had put it in the wrong mailbox and it had gotten thrown away. 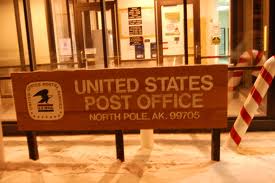 I had given up hope when after three weeks’ delay it suddenly showed up.  Addressed to me in Berkeley, CA 99705-1057.  Barbara had gotten the zip code wrong, probably from copying it from one of my letters where the 4 looked like a 9 – an easy mistake to make.

Out of curiosity, I looked up where 99705 was.  Turns out that’s the post office on Santa Claus Lane in a town outside of Fairbanks, Alaska, with the bizarre name of North Pole.

It’s not the North Pole, of course.  It’s some 1700 miles from the real North Pole, in fact.  The town got its name when a homesteader decided to call his homestead North Pole, hoping to drum up some business from the Christmas trade. The town went bonkers.  It now has street lights shaped like candy canes and street names like St. Nicholas Lane and Kris Kringle Drive and Santa Claus Lane (where the post office is).   It worked like a charm.

Thousands of letters addressed to Santa Claus began pouring in every Christmas season.  Used to, that is, until some Grinch found a sex offender answering Santa Claus mail somewhere on the East Coast – a brutal injustice, I say, which never should have befallen the good folks in Alaska. 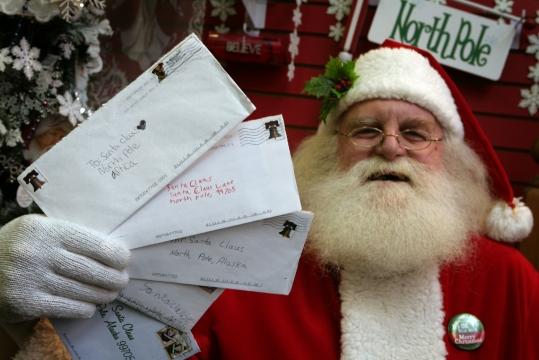 In any case, not a place I want to spend any time, I have to say.  Winter begins mid October and runs till early May and the temperature has been known to get down to -71 Fahrenheit.

But that’s all incidental.  The real thing about North Pole, Alaska, is that there is at least one person working at one their two post offices who is doing their job.  I just wrote them a letter. Now if you think about it, you will note that since that lost letter from Berlin took three weeks to reach me, it probably sat in a very large pile somewhere in that post office for days, maybe weeks, before somebody finally took the time to look up where Ellsworth Street 2734 in Berkeley CA was.  The 1057 in the zip code extension might have helped confirm who it was meant for, but the important thing, I thought, was that somebody did what they were supposed to – looked up the right address and sent it on its way.

I just sent off this letter to one of the elves employees on Santa Claus Lane.  Thought I’d share it with others, who may, like me, be blaming the post office for something they ought to be blaming Darrell Issa for, and giving more credit where credit is due – to hardworking post office employees.

I thought you should know how much pleasure you brought to me because you or somebody else in your post office did their job.  You made a real difference.

A friend of mine in Berlin, Germany, died recently.  Among her possessions were a number of photos and old correspondence she had saved from nearly fifty years ago that I had no idea still existed.  Her daughter found them and mailed them to me.

I live in Berkeley, California and my zip code is 94705.  The letter, however, was addressed mistakenly to 99705, and I am guessing that means it ended up in your hands.  If it was the folks at 771 Badger Road, I hope you’ll pass this along.

I know you do this kind of thing maybe dozens of times every day.  I also know you are a major end point of letters addressed to Santa Claus and I imagine you handle tons of mail for a small town post office.

When two weeks went by and this letter did not arrive, I began my usual rant against the post office – the long lines, all the misdelivered mail, the hours cut back, the post offices closing right and left.  I couldn’t badmouth you guys enough.  I realize it’s the fault of the anti-government forces running wild in this country that you are under such a strain, but in my frustration I was ready to lay all the blame on you.  I also know that 78.4% of you people in North Pole voted for McCain in the 2008 election and only 19.5% for Obama, and that you sent this letter to a place where 92% of us voted for Obama – meaning your politics didn’t get in the way of your professional responsibilities, and I tip my hat to you for that, as well.  Back in the 60s when I worked for the post office the hippies here often dumped mail rather than deliver to houses that sent out the wrong vibes.  Glad to see you’re better than that.

You’ve turned me around completely.  I now have this image of the post office as filled with employees making the effort to get a letter that goes astray back on track to its proper destination.  I know you’re not all heroes, but when I opened the packet and found those old letters and photos I felt weak in the knees at the thought they might have been lost, so allow me to think of one of you, at least, as some kind of hero.  At least for a time.  This tiny fraction of the work that you do every day made my day and I am grateful.

What a great job you do every day, getting mail to people.  No matter how much is done by computer these days, there will never be a substitute for getting those cards and letters and photos and other objects from people into the hands of their friends and family far away.

Thank you so much for the work that you do.

My letter containing all those memories (marked "priority" by the way) went all the way from Berlin to Santa's place in Alaska before finding its way, at long last, to the lower forty-eight, a flying distance of more than 11,000 miles.  A real all's well that ends well story where I get to thank Barbara for her thoughtfulness and an unknown postal employee for doing his job and restoring my faith in the U.S. Post Office.  And renewing my conviction that Darrell Issa ought to be bounced out on his ass.   Michelle Bachmann, at least, is gone.  As is Sarah Palin, whom the good folks who got my letter to me no doubt helped elect governor of their fair state, given their identification with the Republican Party.

Who knows.  Maybe the post office employee who did me a favor was a minority Democrat.

If not, it's nice to know this polarized country can still do things right sometimes.