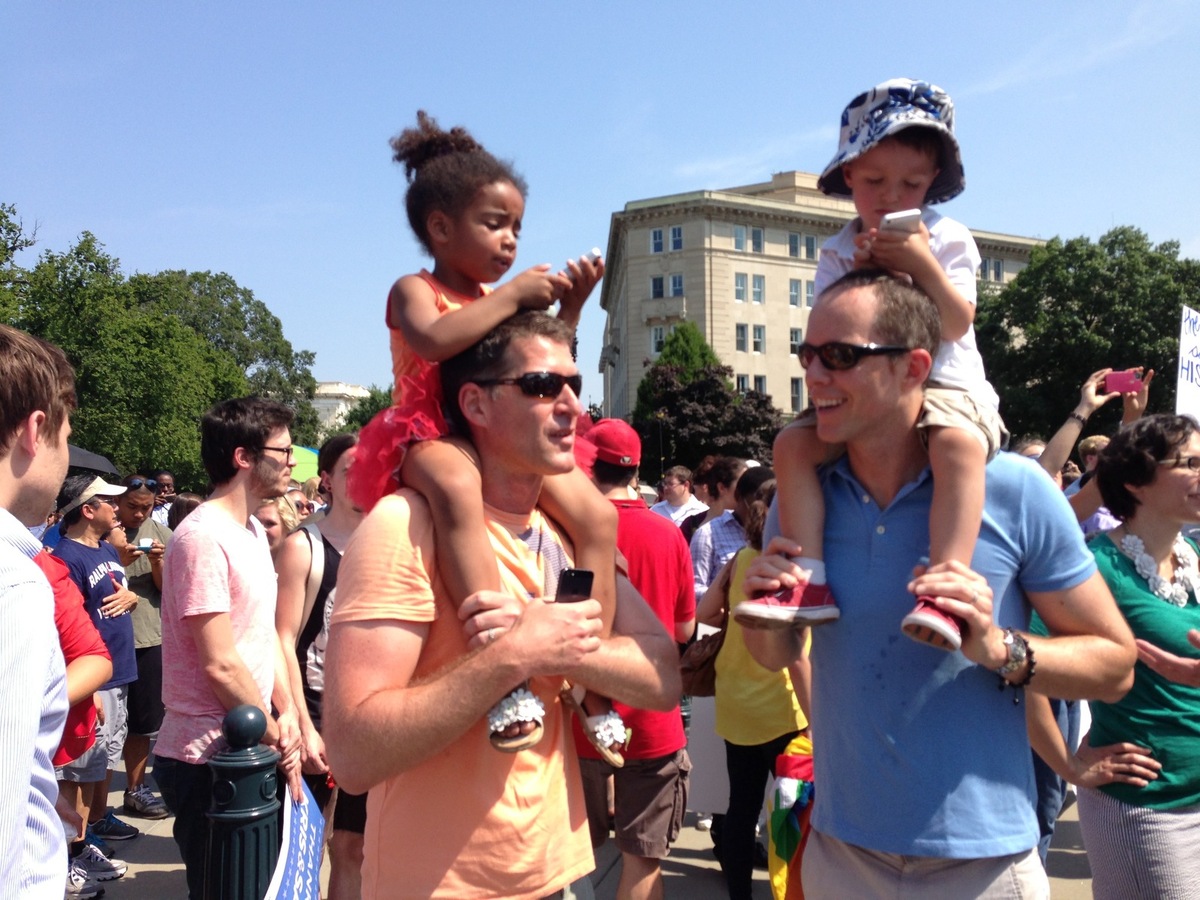 I’ve been wallowing in the luxury of victory, in the delicious news.  I finally understand what they mean by the taste of victory.  It’s coming at me via a number of senses.  The long haul to get rid of DOMA is now mostly accomplished.  And the right to marry in California has been given back and is now in sync with the way most Californians would vote today if they had to.

One way of wallowing for me was to check out what the world press was saying.  Here’s a list of things at random.  I stopped at an even dozen when I realized I’m wasting time when I might be reading the decision.  Or getting started on the champagne.  But since I dug all this stuff up, well...  I always played well with others and shared my toys.

Because I’ve also got a perverse streak and I’m not above rubbing salt in the wound of the homophobes, I decided to look at how they were reacting.

And another curious choice of words, when a lay person calls the decision of the highest court in the land "illegitimate."

But if you're a right-wing Republican, using words to mean what those words normally denote is not something you fuss over.  NOM is that organization that likes to fool people into thinking it's got grass roots support, when most of its funding comes from a handful of right wing ideologues.

Michele Bachmann is always good for a chuckle.   “No man, not even a Supreme Court, can undo what a holy God has instituted,” she says, leaving open what an unholy God might institute, and how many of the gods to which she refers are holy.  But making fun of this lady’s use of the English language is shooting fish in a barrel.

In the National Catholic Reporter, one reads:

In a joint statement, bishops' conference president New York Cardinal Timothy Dolan and San Francisco Archbishop Salvatore Cordileone, chair of the subcommittee for the promotion and defense of marriage, bluntly expressed their disagreement: "The Court got it wrong."

But how did they get it wrong?  Wrong that the court threw marriage back to the states as a states’ rights issue, as marriage has traditionally been?  Wrong that they found animus against lgbt people, when the church’s official position is that lgbt people are “intrinsically disordered”  – not just sinful, mind you, but “disordered” a modern-day psychological term, despite the fact that the American Psychological Organization and virtually all of the organizations working in the field of psychology have made clear unequivocal pronouncements that there is nothing disordered about homosexuality at all?  Are they wrong in determining who has standing to take a case to the Supreme Court?  We learn somewhere in elementary school that “You’re wrong!” should mean more than simply “I don’t agree with you” or “I don’t like what you just did.”

And speaking of official catholic word-abuse, how about that campaign organized by the bishops called Fortnight for Freedom.  Freedom?  It’s freedom they’re about?  What’s free about the insistence that all the people of the United States, Catholic or not, must live according to the rules of the Catholic Church?  Maybe they ought to have a little chat with the folks who call themselves the Equally Blessed coalition.  Equally Blessed consists of four separate groups of gay Catholics, Call To Action, Dignity USA, Fortunate Families, and New Ways Ministry, jumping up and down today “celebrat(ing) and offer(ing) prayers of thanksgiving.”    And they might invite to this chat Justices Sotomayor, who is a Catholic, and Justice Kennedy, who is a Catholic and who wrote the decision.  It’s time for the bishops to show a little humility and recognize when they speak they do not speak for the church any longer.

There’s so much left to do.  They got rid of Section 3 of DOMA, and that means my partner, and soon to be husband, and I no longer have to file a complicated set of conflicting state and federal tax returns because we don’t get any federal benefits as a couple registered as domestic partners but California requires us to file jointly.  But they didn’t get rid of Section 2, which still enables non-marriage states to refuse to recognize the marriages of people from outside – still thumbs their noses at the full faith and credit clause.  That will have to come at some point down the line.  Till then, I guess my partner/husband and I will not be able to honeymoon at one of the $39 a night motels Mobile, Alabama has to offer without bribing somebody to give us a queen-sized bed.  Can’t have everything.

There’s so much else going on, it’s not entirely right that we celebrate only and not give a nod to Wendy Davis in Texas who put herself on the line to protect women’s rights to make their own decisions about their bodies.  And that we acknowledge the nasty slap in the face to the memory of Martin Luther King, John Lewis, and thousands of others who spent their lives getting black people in the south to the voting booth.  Despite blatant example after blatant example of attempts to disenfranchise black voters, the conservative majority on the court actually had the temerity to argue voter intimidation was no longer a problem.  Republicans won big on that one.   It’s as if civil rights in this country was a zero-sum game.  You want us to give some to the gays?  OK, then we’ll have to take some back from black folk.

So the joy is not unalloyed.

But there is joy in the land today.  Don't let the tears fool you.

Time to stop this meandering and open the champagne.