The NSA is all over the news these days.  Republican Obama bashers and people on the left, as well, are making hay over the revelations of just how extensive the ability of the government has become to spy on the world – its own citizens included.  Daniel Ellsberg’s defense of Edward Snowden is titled by the Independent of Ireland, “The United Stasi of America” because he makes reference to that East German Secret Police agency when making his case.  The June 24th edition of The New Yorker has a cover picture of Uncle Sam peeking in the windows of a women in bed looking terrified.  To be fair, in that same edition Hendrik Herzberg makes a case that this frenzy is overblown, that there is no evidence to date of illegal activity on the part of Uncle Sam.

I’m not weighing in on one side of the controversy or the other.  Talk of the NSA pushes buttons for me.   When I enlisted into the United States Army right out of college, in 1962 (it was enlist or be drafted), I got sent to the Army Language School in Monterey, California, today called the Defense Language Institute, where I spent a year studying Russian in preparation for a job with the Army Security Agency in Berlin.  The ASA was directly under and supervised by the NSA until it became, in 1977, part of the army’s military intelligence and security command.

Because I spoke German, I made my way eventually into what was called “Violet Section,” the section set up to listen in on official communist party telephone conversations in East Germany, and, except for an ongoing love of Russian literature and the voice of Dmitri Hvorostovsky, my Russian pretty much went by the wayside.

My unit, the 78th United States Army Security Agency Special Operations Unit (USASA-SOU), was housed at Andrews Barracks on Finkenstein Allee, formerly occupied by Hitler’s SS bodyguards and before that by the Royal Prussian Cadet Institute.  Today it is the site of the Federal Archives.  Every day a bus would take us through the Grunewald Forest to a place called Teufelsberg, where it would climb the hill, drop us off, and pick us up at the end of our eight-hour shift.   Our shifts changed every eight days, and when we worked the day shift in winter, we would go into this collection of Quonset huts before sunup, come out after sundown and not see the sunlight for eight whole days.  The windows were covered and sealed shut.

We worked with a “top secret crypto” clearance and were led to believe they’d throw us in jail and throw away the key if we ever revealed the smallest part of what we were about.   This is the first time in half a century that I have actually sat down to reveal even these mundane details.

It was a magical time for a kid like me in his early twenties.  I was still working with the assumption the world was divided into good guys and bad guys.  Berlin made it easy to maintain that Manichaean view of life.  The Berlin Wall had not yet gone up, but we knew to stay out of the Russian Zone (bad guys) and in the British, French or American (good guys) Zones – the Americans had the best movies, the French the best food.  We were surrounded by bad guys and joked regularly that if the Russians ever decided to make a move we were toast.  No cavalry could ever get to us in time. 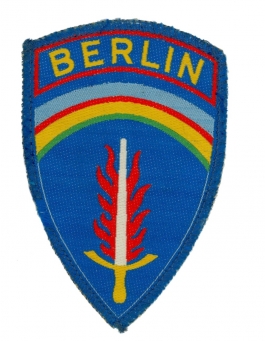 Life in the army was harsh, mostly because of the deadly bureaucracy and mindlessness, which had a way of eating into your soul.    But it bonded us tightly as a group.  Of the 70 or so men in the unit more than twenty made their way for a time back to the San Francisco Bay Area, and I built my chosen family around five of these men in particular, and the families that came with them.  Only two, besides me, are still living.

In addition to these friends-for-life, I had family in Berlin, a secret I kept more or less hidden from the military and I spent much of my time with my Aunt Frieda, my favorite aunt of all time, and with one Berlin family in particular, people I remain close to to this day.  I developed such a strong attachment for Berlin, in fact, that I had plans to emigrate and make it my home.  I came back to San Francisco to get a master’s degree so I could get a teaching job in Berlin, took what I thought was a brief detour to Japan, and ended up spending the last twenty years of my career there instead.

What that means is that each time I go back to Berlin – and I’ve made the trip perhaps fifteen or twenty times in the intervening years – I go back to a history of things that never happened.  Each visit to the now vastly changed city is bittersweet.

I didn’t intend to make this a nostalgia trip.  I have gone off on this lark because of an article I came across in this morning’s Berliner Zeitung.  A series of photos, rather, of Teufelsberg today, forty-eight years since the last time I walked out the door of the Listening Station in the summer of 1965.  It was shut down, finally, in 1992.  The site was sold to a developer who went bankrupt, the place has been completely vandalized, and it is the equivalent of a ghost town.  Sitting atop a pile of rubble and offering a view for days – or at least 300 kilometers, if the captions are accurate.

I don’t know how long the photo collection of what the BFS (Berlin Field Station) eventually became before it fell to ruin will remain available on line.  Have a look, if you’re interested.  I’ve translated the captions for those who don’t know German.  It’s titled “Where the spies used to listen in” and is available at

Picture credits: Teufelsberg FSB in 1965, as I knew it: http://www.brendanjamison.com/teufelsbergsecrets.html

Labels: The American Empire at War