Blood in the Water in Bavaria 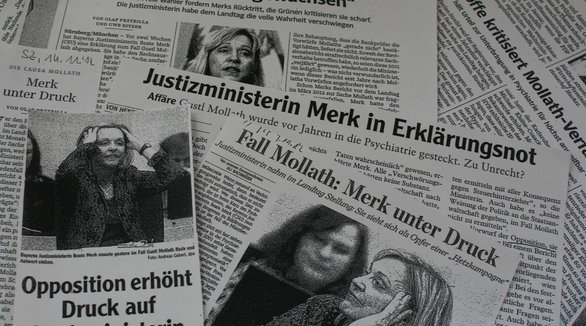 Gustl Mollath has been in an insane asylum in Bayreuth for more than six years.  He claims he’s there because he blew the whistle on the money-laundering activities of his ex-wife and there’s absolutely nothing wrong with his mind.  Beate Merk, the Bavarian Minister of Justice, on the other hand, says his talk of corruption at the Hypo-Vereins bank in Nuremburg, where Mollath’s wife worked, along with Mollath’s attempt to strangle his ex-wife, indicate he suffers from paranoid delusions and is dangerous.  Mollath doesn’t deny that he went after his wife, but not the way she claimed.  She says he was out to kill her.  He maintains that he was trying to get her out of the business of carrying illegal funds for rich clients to hide in Swiss bank accounts.  According to Merk – and she is backed up by the district attorney - there was ample reason for institutionalizing Mollath, ample evidence that he was violent.  She also maintains that his institutionalization had been revisited yearly and nothing has transpired to suggest an error was made.

Mollath steadfastly maintains he has been railroaded.  And just this week the story broke that he may well be telling the truth.  The bank has released documents indicating that Mollath’s charges against his ex-wife may have some substance.  She and others were fired from their job.  A friend of Mollath's has come forward with the information that Mollath's wife let it slip she she knew how to "do him in."

Now the question is why the bank didn’t come to Mollath’s defense? Did they have something to hide?  Was the Hypo-Vereins Bank in Nuremburg actively involved in illegal activities?  Why else would they sit idly by with proof that Mollath’s charges against his ex-wife may have been legitimate and let him be locked away by a local D.A. who argued to the contrary?

This could still be a story about a conspiracy theorist.  Mollath isn’t the only person behind bars maintaining his innocence.  But if it’s a story about a cover up, it has the makings of a major scandal.  So far I’ve found it covered only in the German media, but it has international implications, first off because it involves international tax fraud and money laundering via Swiss bank accounts, secondly because alarms naturally go off when any mortgage bank falls under suspicion.  Mollath apparently named names.  What are those names, and were his wife and her colleagues fired because of illegal extra-curricular activities?   Or were they paid off to keep quiet about the bank’s participation?  So far no guilt has been established, but what is one to do with the disconnect between the bank and the Ministry of Justice?  The bank had evidence from the start there was wrongdoing, but when Mollath testified to that effect he was declared delusional.  What is that all about? And what are we to make of the fact that when Merk gave her report in March of this year she deliberately left out the fact that her office was in possession of the bank’s evidence?   Where is this buck going to stop?

The charge that Mollath was delusional is one thing.   What about the second charge – that he was “dangerous”?  How, in any case, was it possible to institutionalize a man simply on his ex-wife’s charges that he attacked her?   And what’s with the small fine?  Apparently there were no witnesses involved, and the fine was a mere 1000 euros, hardly a sum one would levy for attempted murder.

Justice Minister Beate Merk is politically connected to the CSU, the Christian Social Union, the Bavarian sister party to the Christian Democratic Union, Germany’s governing political party.  The opposition smells blood.  Germany has a group of independents known as the “Free Voters.”  They are especially strong in Bavaria (about 10% of voters) and their leader has labeled all political parties in Germany as a bunch of losers.   They seem to be picking up the charge against Minister Merk.  And Mollath now has a fairly professional website set up to raise support for his case.

I’ve tried to find English language sources on this story, but so far have come up empty-handed.  If your German is up to it, the details are available here.

The picture above shows a number of clippings about the story from various German newspapers.  If I am violating any copyright laws, please let me know and I will instantly take the picture down.  Google Images attributes it to this link.