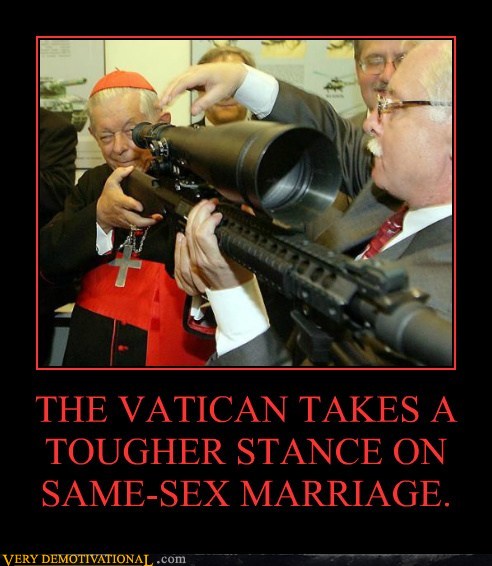 Nicole Winfield of the Associated Press reports from Vatican City that the Holy See has spoken out against the progress Americans in four states made toward greater civil rights for LGBT people.  While Americans in Maine, Maryland, Washington and Minnesota are putting on their dancing shoes and having themselves one joyful party, the Vatican is suggesting the shoes should come off and the feet should be bound once more.

The Vatican is “the lone voice of courage,” suggests L’Osservatore Romano, the Vatican’s mouthpiece.  What’s next, polygamy?, they want to know.

You’ve got to hand it to these boys.  They are world class artists in the art of Orwellian doubletalk.  Black is white.  The bear doesn’t really evacuate in the woods.  Heathcliff doesn’t really love Cathy.  As the “lone critic of modernity” the Church is “the only check ... to the breakup of the anthropological structures on which human society was founded.”

You gotta love this blabber.  First off, let’s remember that when you hear “the church” from the official voice of the Vatican, they’re talking about the old boys network in silks and satins and jewels.  “The church” has long since left these geezers behind.  Secondly, “the breakup of anthropological structures” is a curious turn of phrase.  Anthropology describes; it doesn’t prescribe.  It tells you what is, not what should be.  Anthropologists do not work for the Holy See.  And when they do speak out they say some interesting things, like


The results of more than a century of anthropological research on households, kinship relationships, and families, across cultures and through time, provide no support whatsoever for the view that either civilization or viable social orders depend upon marriage as an exclusively heterosexual institution. Rather, anthropological research supports the conclusion that a vast array of family types, including families built upon same-sex partnerships, can contribute to stable and humane societies.

And just when you think it couldn’t get any better, you see that Federico Lombardi, the Vatican’s “official spokesman” comes out with “children should have a right to say they have a father and a mother.”

On the surface, that sounds like a reasonable perspective.  Not one I agree with, but one I can respect.  It’s better to have a male and a female parent to raise you, he’s saying, than two parents of the same gender.  Lots of people will agree with that.

Of course if you grow up in a happy home with a mother and a father who love and cherish each other as well as you, you’ve got a headstart in life.   Let’s hear it – seriously – for intact mommy and daddy based households.

The problem with throwing in this red herring is that he’s talking about marriage, not raising kids.  If kids were born the moment anybody said “I do,” it would be one thing.  But people marry for lots of reasons, and not just to have kids.  To tie the two together does a terrible disservice to childless couples.

And even if we do, for the sake of argument, tie marriage to child-raising, what are we to do with all the kids born into broken families?  Or into families where parents die young and there is no family member willing to take them in?  To listen to Lombardi, you’d think gays and lesbians bust down the front doors of healthy happy heterosexual parents and steal their children.

“Kids deserve their mother and their father,” he says.  Right.  Get those kids away from the kidnappers and bring them home!

Countless families – they number into the hundreds of thousands – are comprised of parents, straight and gay, who take in children and love them as much as any child they give birth to.  To deny that is one thing.  To call yourself courageous in doing so is a new low in really nasty doubletalk.

Lombardi not only puts his foot in his mouth.  He then appears to want walk around for awhile.   ‘‘… (W)hy not contemplate freely chosen polygamy, and naturally so as to not discriminate, polyandry?’’ he asks.  The slippery slope line.  Why give rights to women to vote?  Next thing we’ll have to give children those rights.  And naturally, so as to not discriminate, the right to drive a car!

They had a good run, the boys at the Vatican.  And they will go on representing a pre-modern world view for many years to come, I imagine, bringing back the Latin language, arguing every sperm is sacred, urging American parishoners to vote Republican.  Like TV evangelists, they will challenge us to laugh so that we don’t cry.

Oh, and get your hand off those condoms, fellah.   Vote for a fellow Catholic who happens to be a Democrat?  We’ll take a way your right to communion.

As for you non-Catholics out there, I'm talking to you too!   Don’t you dare insist that everybody has a right to contraceptives.  You have no right to step on my religious freedom when I tell you what you can’t do and when I use my money and my power to change the laws that govern you.

I got my rights!