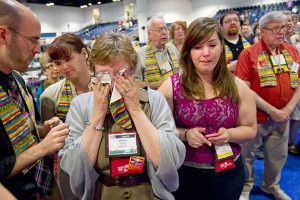 I just watched a half-hour video on the struggle by lgbt members of the Methodist Church at their national convention to remove the homophobic language from their Book of Discipline,  the Constitution of the United Methodist Church and statement of its doctrinal beliefs.  The event took place a couple months ago, but the issue is still current.

The lgbt members and their progressive allies were trying to remove the statement, “The United Methodist Church does not condone the practice of homosexuality and considers this practice incompatible with Christian teaching.”  They succeeded in committee, but failed when the delegates to their national convention in Florida voted at large because of a large number of solidly conservative African delegates.

A thought crossed my mind while watching this video.  All those pennies I put in the collection boxes for the poor people of Africa when I was eight or ten years old.  How many of them ended up helping to teach kids to grow up and be homophobes?   Cast your bread upon the waters, they say.  I can just see the nightmares coming now,  loaves of bread rising up out of the waves like sharks and biting me on the ass.

This is a story for anthropologists.  One American church after another has evolved on the issue of homosexuality, as have churches in other places where once authoritarian religious institutions have felt the power of the Enlightenment.   To counter this force, reactionary forces within the church are reaching out to church members from Africa, where the evolution of consciousness is taking place at a slower rate.

I don’t have a dog in this race.  I left the church a half century ago, way before the gay issue became a divisive factor.   From where I sit, religion is a silly game of first creating an imaginary friend who lives in the sky and then making him say all sorts of things about how people who make you uncomfortable displease him.  As a kid I remember battles over whether the communion wine should be grape juice and whether it was sanitary for everybody to drink from the same cup. Quibbling seems to be a primary feature of organized religion.  Today the struggle is over whether gay people should be labeled sinners and excluded from communion, but it strikes me as the same pitiful struggle by silly people over who gets to speak for God and which biblical cherries go into the pie and which get left behind.

Today, what I find so interesting is that all these interdenominational spats have given way to intradenominational ones.  What the Methodists are going through – whether to raise the consciousness about the harm done to lgbt people by a literal (and arbitrarily selective) reading of scripture – the Episcopal Church, the Lutheran Church, the Presbyterian Church and many other protestant denominations have gone through before them.  Increasingly, they have come down on the side of full acceptance of their lgbt members, without reservation.  Wikipedia lists some twenty denominations in the U.S. and Canada they identify as “LGBT-Affirming.”  The Methodists will get there in time, I suspect.

I’ve been thinking out loud with a friend facing the same struggle within the Catholic Church.  I am probably not very helpful to him, since I have long since cut and run, and since I have committed myself never to refer to people and institutions who espouse homophobia as “home.”   But at the same time I recognize the desire to hang onto a home that you feel you should not surrender to those who would misrepresent it and make it less than it should be.  It’s a heartbreaking dilemma.  I’m in the curious position of wanting him to stay and fight for an institution I have little use for, and I question my own motives.

Is that because I’m hoping the institution will get better?  I suppose so.  I don’t think the Catholic Church is going to disappear overnight and I sure would prefer a gay-friendly institution to the homophobic one it is now.  Actually, there is hope for the Catholic Church.  With 90% of its members openly practicing birth control despite the word from the hierarchy, you see the church splitting down the middle.  The progressives may some day take control.  If it ever becomes once again Christ centered instead of papacy centered, all sorts of things are possible.

With this in mind, and looked at from the personal level, I hope my friend finds the home he is looking for.

Some time ago I blogged about the documentary Tears of Gaza and reflected on the gap between rational discussion of international foreign policy and bombs and drones and whether, on the one hand, Israel’s retaliation in Gaza for the Hamas inspired rockets into Israel is “proportionate” or not – and whether it should be.    And on the other hand what it looks like to sit with maimed children whimpering, because they are too exhausted to cry, at the physical and psychological distress.

In a much smaller way, that’s what this video of the Methodists in Florida did for the me – take the heady discussion over whether the evolution of human rights is accelerating or not, and replace it with the up close and personal image of a few heroic progressive members of a religious institution handling disappointment and defeat, and finding the strength to fight another day.

If you’ve got a half hour to spare sometime, even if you can’t tell a Methodist from a Pastafarian, have a look at these folk trying to make their lives better.

And send them some good vibes when you’re done.

Or prayers, if you’re a believer.