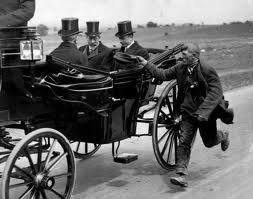 Just noticed in this morning’s news that all the new GOP chairmanship appointments, nineteen so far, have gone to white males.

Some people are surprised by that, as if they hadn’t heard that this is the party of white males.

I understand many will want to keep the focus on gender inequity, but I hope in the fuss, which I consider fully justified, we won't forget it's more precisely the party of rich white males.  I thought it might be interesting to poke around and see just how rich these nineteen would turn out to be, so I checked.

Using figures provided by Christopher Schnaars of the Center for Responsive Politics, I lined the guys up in order of wealth, as determined by their 2010 income tax returns (which are estimates, by the way, and do not include the value of their home(s) or other personal property – like yachts and planes. And car elevators, of course.)

Lest you get the false impression I think there is something wrong with being rich, I don’t.  The reason I own my own home in the Bay Area is that I once had an annual salary for a few years to match the poorest guy of the nineteen on the list (his net was my gross, however), and I can only say this good fortune should be everybody’s.

At the same time, it is interesting to note that 12 of the 19 had incomes in excess of one million dollars in 2010.  (And #13 was in the whites of his eyes range.)  Not that you have to be rich to run the country, but it sure does seem to trend that way.

I am also not suggesting there is a link between who gets appointed to committees and wealth.  I have no evidence of that.  I'm simply looking at a random selection of GOP politicians, as far as I know, and at their wealth levels.  If I wanted to look at the power center, I'd have to look at

Whatever you have to say about the GOP, there does seem to be a very high correlation between wealth and power.

And gender.  They definitely need to correct for gender.  Be more like the Democrats from California.

Mama, tell me once more, what’s a plu-to-crat?

What a spectacular post, Alan! It is so extraordinarily helpful to see this rogues' gallery lined up by wealth, too. I'll be referring to this valuable piece frequently in days to come.