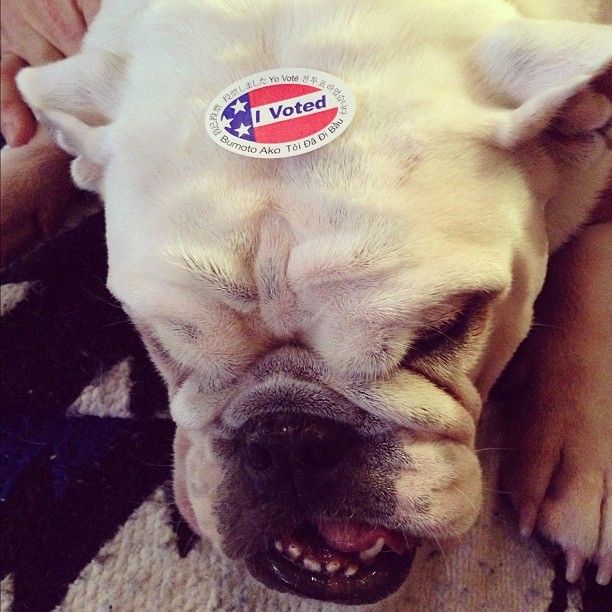 That’s Vietnamese for “I voted.”  I’m wearing a little sticker on my T-shirt with that on it.  I had the choice of English, Spanish, Chinese, Tagalog or Vietnamese.  I figured there was no reason to limit myself to plain vanilla.

I got a lump in my throat this morning just before nine when I drove past my voting place to take Taku to the BART station.  There were lines!  Looked like maybe thirty people waiting to get in.  I’ve never seen lines there before.  It was probably people wanting to vote before going to work, but it tickled me no end.  When I went to vote myself at about 2, there was no wait.

The California ballot, for those of you who live elsewhere, was eight pages long.  I got to vote to remove the death penalty.  That felt good.  To raise taxes to put the swimming pools back in South Berkeley.  That felt less good, and it puts me in the camp of California voters who vote for a whole lot of measures which cost a fortune, without an overview of the problem of spending.  It shouldn’t be this way.  We should have representatives who know the score and make judicious decisions about how money is spent.  But we don’t, so we do it this sloppy inefficient way.

I voted for a blind man.  I voted for Judy Appel for school board because I’m a great fan of Van Jones – you know, the guy Obama put in charge of green jobs whom the Republicans chased out of office for being a Marxist  (He isn’t).  He put out a video  telling us she’s a longtime friend of his, and that’s a good enough endorsement for me.

A hard call was whether to vote for labeling of genetically modified products.  This is an issue, like whether cell phone towers and high tension wires fry your brains, where the rationalist in me says don’t listen to the Chicken Littles, go with progress, and the lazy pinko entitlements oriented Berkeleyite in me says better safe than sorry.  In the end, I voted yes.  Let us know if you’ve nuked the DNA on the corn so I’ve got something to worry about in case all the other things I’ve got to worry about go away.  It’s, of course, like putting windows in on one side of your house to protect you from the weather and leaving the spaces wide open on the other side of your house.  We don’t label the milk from cows who eat GMO food.  Or their meat, either.  But hell, it’s a start, right?

I’m counting on Nate Silver.  He’s never wrong and he’s got Obama’s chances up around 90%.  I just can’t bear the blow-by-blow as the tallies are counted.  I’m looking elsewhere for news.  Same-sex couples could lose their right to PACs – the pacte civil, or domestic partnership.  But the Supreme Court in Madrid today shot down the right wing’s attempt to rescind the rights of lgbt folk in Spain to marry.  Eight to three, with one abstention.  Not too shabby.  Minnesota, are you listening?

Gay folk are all a-flutter over the Spanish victory.  Not so much because they held off the right-wing attack, but because gay-friendly HuffPost posted a bunch of handsome Spanish shirtless hunks to go with the story.  (They have since taken it down, but I captured the photo anyway, heh heh.)  Usually it’s the straight press that reduces gay people to sex and parties, this time it’s a thoroughly gay-friendly place.

Come to think of it, shirtless men tend to be pretty friendly.  It’s all in how you look at it.

One last comment.  When I finished voting, I turned to hand my ballot to a polls worker.  It was an African-American woman.  Without a smile, she took it out of my hands and comments, “OK, let’s get this Romney guy into the White House, now!”

If you didn’t know this was Berkeley you could make all sorts of hay with that.

I responded, “I see you’re the type that likes to see grown men cry,” and she let out a hoot and we deposited my ballot into the container.  The scanners aren’t working, so they’re all going into a box to be scanned later.  In a single instant I got a sense that America is a mess right down to our voting system, and at the same time this town is so totally democratic that even the poll takers know they can get away with any anti-Republican remark, legal or not.  If she had had a twinkle in her eye, it would have been one thing.  It was the straight face, followed by the guffawing all around later, that made my day.

Now we wait and see.

Alan, a great posting. I'm right there with you as you try to cope with the blow-by-blow accounting of what's going on, while trusting that Nate Silver's right.